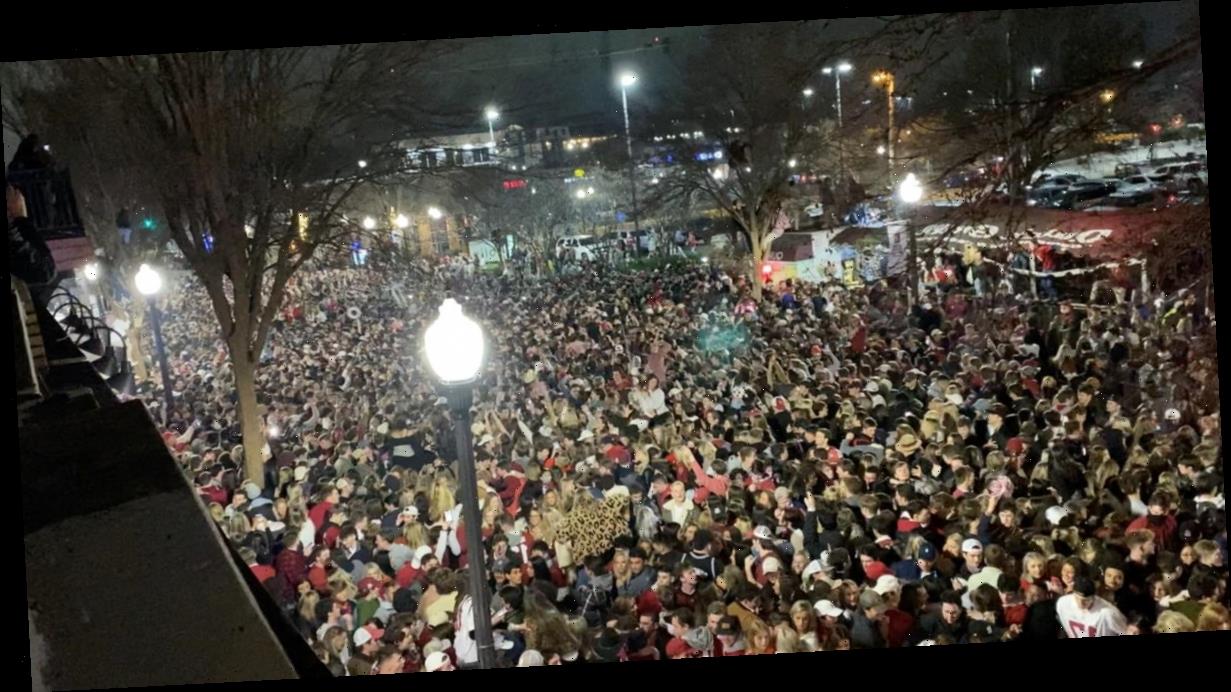 Huge crowds were seen packing the streets of Tuscaloosa, Alabama after the Crimson Tide football team defeated the Ohio State Buckeyes 52-24 in the national college championship Monday night. The fans, many without face coverings, celebrating in close proximity despite COVID-19 warnings.

Social media images and video showed thousands of fans celebrating outside after the championship game, ignoring pleas from local officials to adhere to social distancing guidelines amid the coronavirus crisis.

There is a significant police presence, but they are allowing the celebration on the Strip. And more fans – some masked, many not – continue to pour into the street pic.twitter.com/9VANn0gCLj

Fans appeared to party close together in downtown Tuscaloosa without wearing face masks. Images showed overfilled bars on a stretch in the city called “The Strip.”

Days earlier, Tuscaloosa mayor Walt Maddox told fans in a video message to celebrate in a “responsible way” ahead of the game.

“There will be a time and place to celebrate, but this is not the time,” he said. “All of us have friends, family members, people that we know and love who have been impacted by COVID-19. Presently, our hospital is stretched.”

In the upcoming days around the National Championship Game, we all have a role to play in keeping our community safe.

Please continue to follow @ALPublicHealth guidelines including wearing a mask and limiting gathering size as you cheer on the Tide. Thank you and Roll Tide! pic.twitter.com/OzXZDJMQEu

CBS affiliate WIAT last week reported that DCH Regional Medical Center in Tuscaloosa – the state’s third largest hospital – was “struggling” with the number of COVID-19 patients as it was preparing to deal with the holiday surge. Overall, according to the latest CDC’s tracker, more than 44% of ICU beds are currently being used for coronavirus patients in the Tuscaloosa metro area.

“We’ve had two massive COVID superspreader events in less than a week,” historian Kevin M. Levin wrote Tuesday. “The first took place in Washington, D.C. during the January 6 insurrection and the second took place last night in Tuscaloosa, Alabama in celebration of a football victory. We will never learn.”

Others on social media worried the celebration could turn into a super-spreader event.

As much as I love #Bama Football, the scenes from Tuscaloosa right now are frightening. Afraid the celebration will be a super spreader event!
All those students who have just returned to campus and now all crammed together without masks on. 😷

Here’s what it looked like last night at the big super-spreader event in Tuscaloosa. Roll COVID roll…. pic.twitter.com/wuakGJGEgq

Let’s check back in on Tuscaloosa in about a week https://t.co/J2QIsZFCMI

The championship marked the end of a college football season in a pandemic, a season that was uncertain to be played in the summer and filled with disruptions in the fall.  Alabama (13-0) finished undefeated and became national champion for the sixth time in the last 12 years under coach Nick Saban.