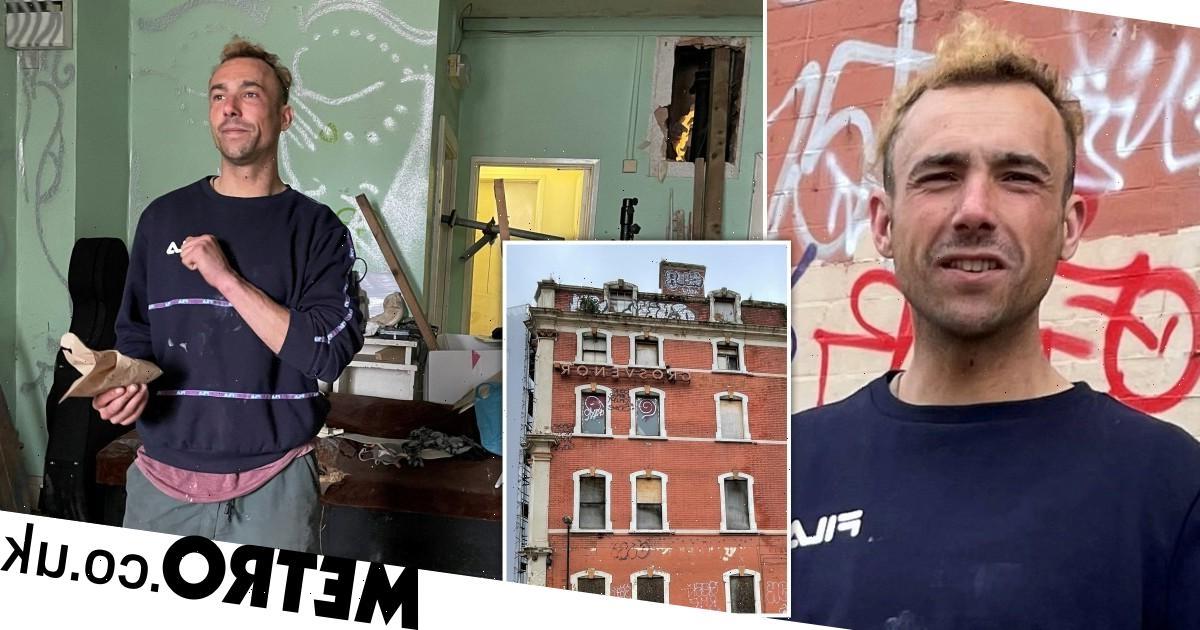 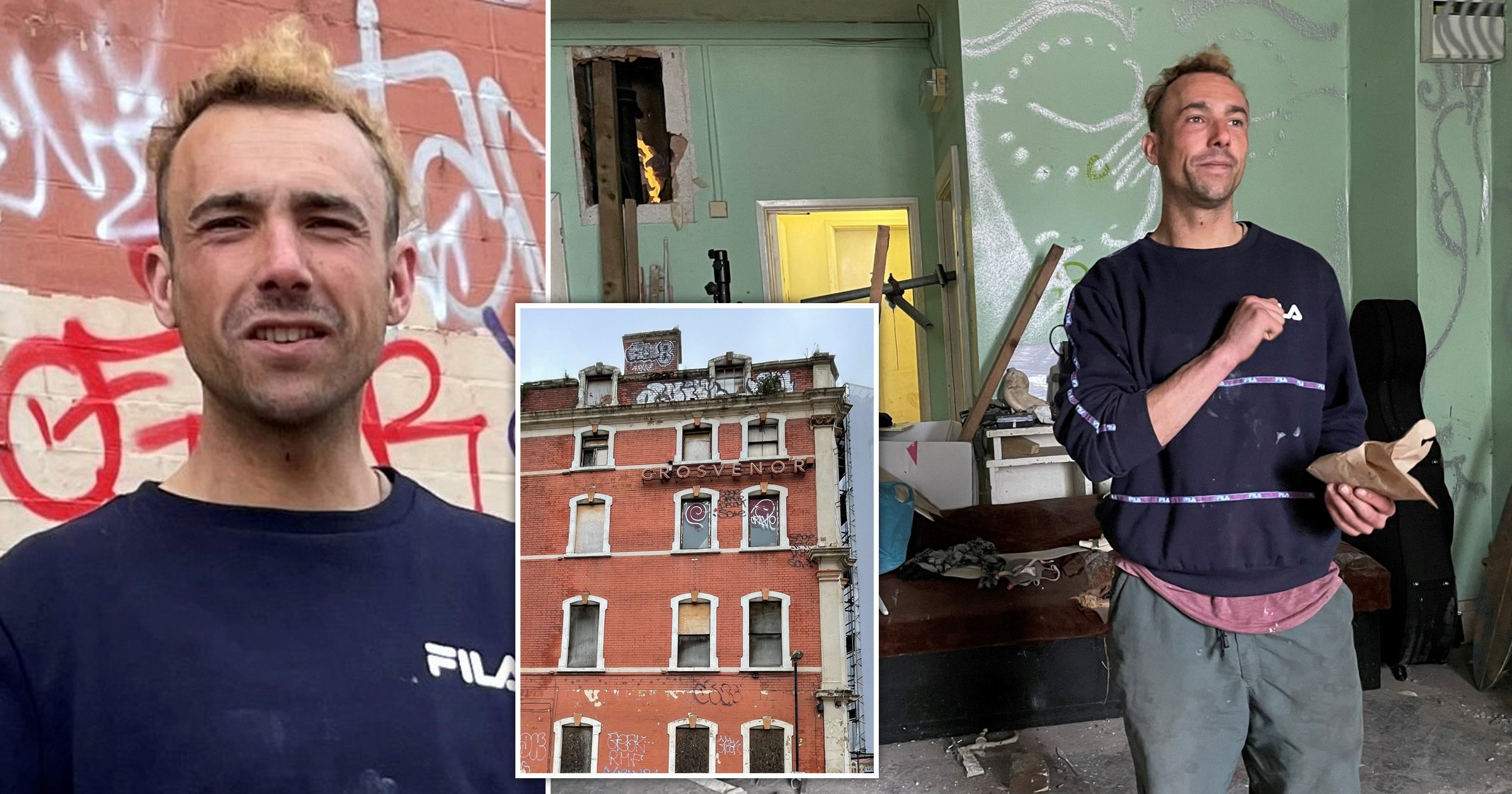 Meet Tom, who lives in a run-down grand hotel that used to be one of the most exceptional in the country.

Even better, he resides there all on his own.

The 30-year-old moved into the Grosvenor Hotel when he decided to try pushing at a key card door and it opened.

The hotel is 150 years old and hasn’t been used for nearly two decades. Inside is a reflection of this neglect with rotting furniture filling the rooms and graffiti covering the walls.

Tom now lives in the building, which was built in 1875, and has started making some home improvements.

Every night he climbs the grand staircase to use one of the various rooms – all of which he has started tidying up and making habitable.

From the hotel he has incredible views across Bristol. However, there are some issues – including non-existent ceilings and dodgy floors.

To make it more homely, Tom has created a living room with a sofa, a table and a few chairs and has cleared some of the junk off the floor.

Meanwhile, he is also painting some walls.

‘You can tell this place used to be the real crème de la crème,’ Tom notes.

‘Some of the wood, the dark mahogany wood, the wallpaper, the ornateness around the high ceilings, the detailed work.

‘There is so much heritage here. The people who have come through this place are amazing.

‘This is a wonderful building, there’s loads to it that I really enjoy. And to have a safe space inside.’

Tom grew up in Hertfordshire and has lived in Bristol for six weeks. Sadly, he struggled to find any official support after leaving rehab.

‘I had found a key card down an alleyway and it just happened that when I used it on the swipe, the door was already open,’ he explains.

‘I thought it was to do with the key card but it really wasn’t. I’m gradually, slowly tidying up each room one at a time.’

The building is currently part of a planning row and Tom could be the last ever resident of the Grosvenor Hotel.

The long running saga of the ‘eyesore’ near Temple Meads rail station reached its latest chapter this week.

A report updating Bristol City Council plans to use a Compulsory Purchase Order (CPO) to acquire the former hotel in order to redevelop the land on which it is located.

A ‘decision pathway’ submitted to cabinet includes plans for a Joint Development & Land Agreement (JDLA) for the development of the Temple Square site (including another former hotel, the George & Railway) and the purchase of Station Approach, as well as the proposed acquisition of land at Temple Square including the former Grosvenor Hotel.

The proposed CPO of the Grosvenor is part of a scheme expected to cost between £16.67m and £19.67m promised to deliver ‘significant city benefits… as an outcome of the long term economic growth driven by the George and Railway project alongside the wider regeneration achieved through a joint development and land agreement’.

A decision on the future of the land and the buildings which sit on it will be taken by Bristol’s cabinet.

Bristol City Council senior development surveyor, Jan Reichel, said in her report: ‘The development will have the potential to achieve high sustainability outcomes, based on design proposals and the excellent accessibility of the developments at the heart of the Temple Quarter and near to Temple Meads Station.’

However, Tom urges others to understand that the Grosvenor Hotel is not just a name on a report, it is now his home.

‘I often think about the transition between the people on the outside of the building going about their day to day, trying to race for something,’ he says.

‘I’m sat here with infinite time, trying to collect myself in my own bits of meditation, but at the same time feeling like I can keep myself busy as there’s a lot to do.’

The council want to buy land at Temple Square including the former Grosvenor Hotel ‘to support the wider redevelopment and regeneration of the Temple Quarter area.’