A Reddit user has revealed that he almost ruined Christmas by buying his family DNA kits, forcing his parents to confess his sister had a different father – but luckily the bombshell turned out to have a positive story behind it.

Posting on Today I F***ed Up, Redditor Snorkels721, believed to be from the US, said he had bought the testing kits for his mother, father, brother, and two sisters.

But when his mother started panicking and insisting that they didn’t take the test, the siblings quickly realised that  one or more of them might not have the same father.

Later on, his mother admitted that she’d had his eldest sister with another man – who passed away shortly after her birth.

She then met the rest of her children’s father who helped her through the grief and they went on to have a family of their own, but she’d kept it a secret as it was too painful to speak about. 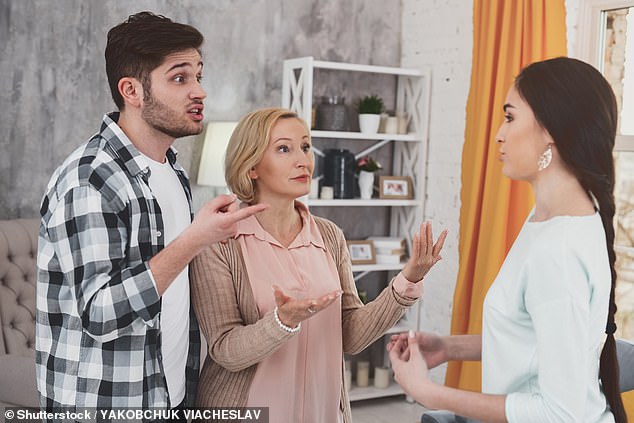 The original post by the US-based Redditor explained that their mother had been reluctant for anyone to take the tests, then suggested just one sibling do it

But Snorkels721’s update hours later revealed the family had been brought closer together after their mother explained that their eldest sister had a different father who died shortly after her birth, and that the man she thought was her father had helped their mother through the grief and fallen in love

Redditors loved the story, which has been liked 142,000 times, and shared their own DNA-related discoveries, with one user who claimed he worked for AncestryDNA saying it ‘happens all the time’.

Snorkels721’s original post said: ‘Earlier this year, AncestryDNA had a sale on their kit. I thought it would be a great gift idea so I bought 6 of them for Christmas presents.

‘Today my family got together to exchange presents for our Christmas Eve tradition, and I gave my mom, dad, brother, and 2 sisters each a kit.

‘As soon as everyone opened their gift at the same time, my mom started freaking out. She told us how she didn’t want us taking them because they had unsafe chemicals.

‘We explained to her how there were actually no chemicals, but we could tell she was still flustered. Later she started trying to convince us that only one of us kids need to take it since we will all have the same results and to resell extra kits to save money.

‘Fast forward: Our parents have been fighting upstairs for the past hour, and we are downstairs trying to figure out who has a different dad.

‘TL;DR [too long; didn’t read] I bought everyone in my family AncestryDNA kit for Christmas. My mom started freaking. Now our parents are fighting and my dad might not be my dad.’

Hours later, the Redditor posted a very happy update about the ‘Christmas miracle’.

He added: ‘CHRISTMAS ISN’T RUINED! My FU actually turned into a Christmas miracle. Turns out my sisters father passed away shortly after she was born.

‘A good friend of my mom’s was able to help her through the darkest time in her life, and they went on to fall in love and create the rest of our family. They never told us because of how hard it was for my mom.

‘Last night she was strong enough to share stories and photos with us for the first time, and it truly brought us even closer together as a family.

‘This is a Christmas we will never forget. And yes, we are all excited to get our test results. Merry Christmas everyone!’

Others made jokes about the unusual story, with one user saying: ‘Feliz Not-Your-Dad’

Reddit users shared their own stories, including one man who uncovered a half uncle through the site, and another whose relative divorced his wife after finding out one of his kids wasn’t his own.

Foofad said: ‘A guy found me on 23andme and it turned out we had 12.5 per cent DNA in common making us close cousins. But then I found out he was born in the fifties which makes cousinship impossible.

‘It turns out he’s my half uncle. And in the process of figuring out how the hell he eluded the family, it turned out that the guy we thought was my great uncle was actually my uncle – my grandma hid the fact that her very younger brother was actually her kid. And he was this guy’s brother.’