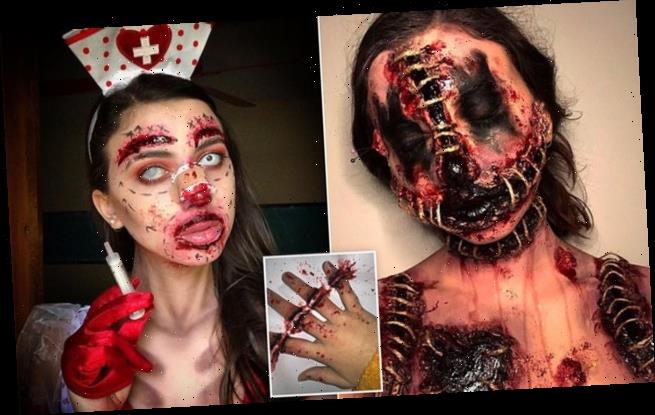 TikTok’s queen of horror! 18-year-old makeup artist goes viral by creating gruesome wounds and gory looks that are so lifelike her two million followers often think they are REAL injuries

An 18-year-old makeup artist has shocked social media with gory looks that appear so real, people often mistake them for horrific injuries.

Kayla Kelley, 18, from Atlanta, Georgia, has amassed 2.1 million followers on TikTok thanks to her incredibly gruesome creations that can sometimes take hours to complete.

The self-taught special effects artist, who gets her inspiration from movies and TV, has conjured up all kinds of gruesome injuries on her own body, from scabs coated in blood to knife wounds – and even pretended to stab her own fingers with toothpicks in a particularly eerie scene. 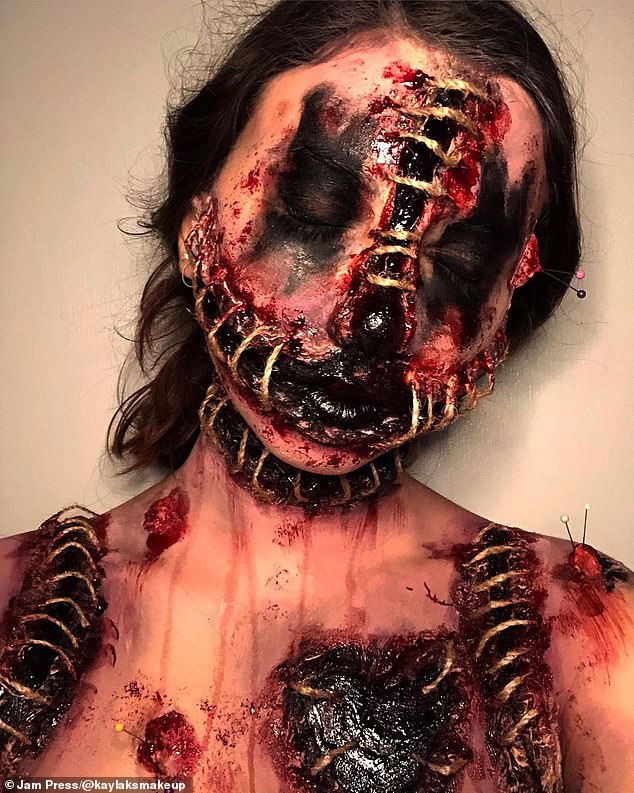 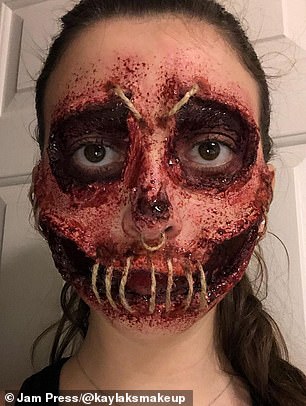 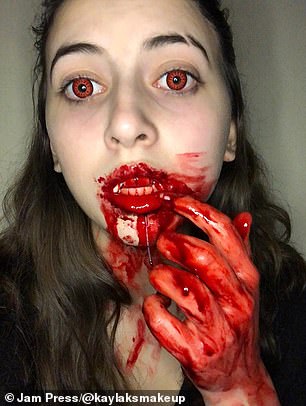 Made you look! The Atlanta-based teen’s gory creations are so lifelike that many of her viewers believe they are real 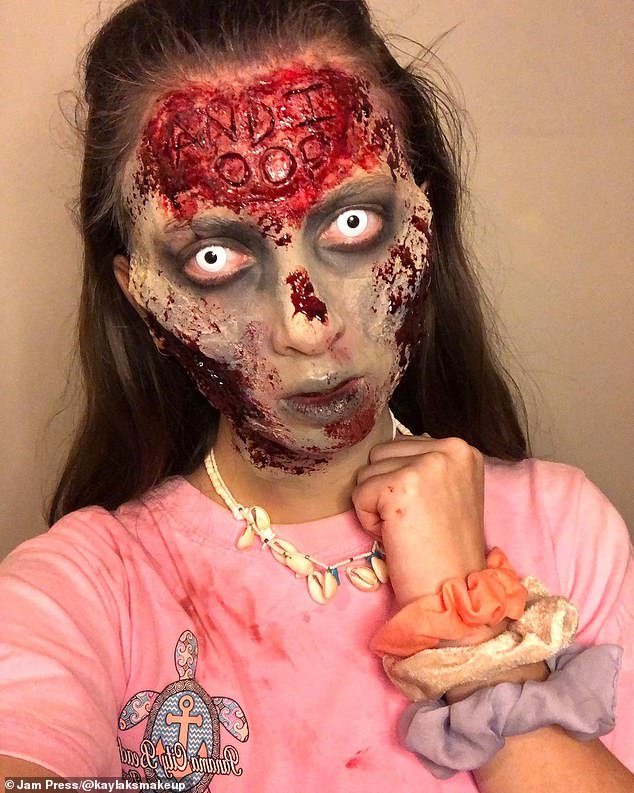 Something for everyone! Kayla experiments with all kinds of looks, from more out-there zombie creations to realistic wounds and injuries 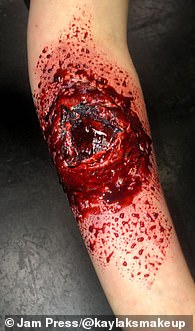 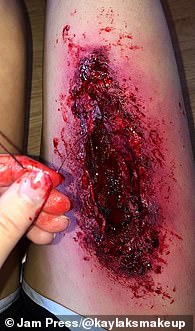 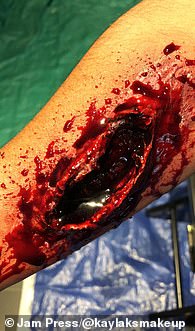 Speedy: The makeup pro only started learning her skills a few years ago, when she joined an art class in high school, and she’s been teaching herself ever since

Kayla’s skills have earned her admiration and awe from her followers – however many admit that they initially thought the creepy creations were completely real. 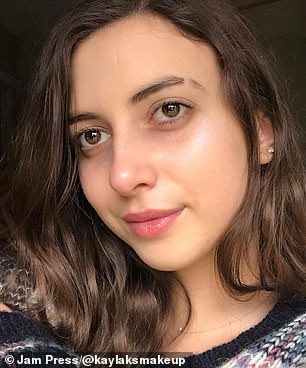 Changing: Kayla always wanted to pursue acting, before she fell in love with makeup

‘God I thought it was real,’ someone commented on a recent clip, where Kayla slices off skin from her finger with a makeup ‘scalpel’.

‘The finger looked so real I thought you hurt your finger,’ another horrified fan wrote.

In a different video, Kayla carves the word ‘impostor’ as well as a small cartoon character into her arm, before promptly slicing the bloody ‘skin’ off.

She also creates ‘holes’ in her hand, which are filled with blood, and many viewers who have trypophobia – a fear of irregular patterns or clusters of small holes or bumps – say that it is too ‘uncomfortable’ for them to watch.

‘I’ve always had a love for the film industry but I wasn’t interested in makeup until high school, when I started experimenting with it,’ Kayla told Jam Press.

‘I had just quit my dream of becoming an actress because I lost interest. I joined an art class at school, and that’s when I started painting on myself at home. It all began there.

‘If it’s just a small wound on my hand, I can complete it in 20 minutes. If it’s a full-body zombie look, it can take up to five hours.’

Kayla particularly admires the work of Greg Nicotero, the special effects makeup artist and executive producer of Fear The Walking Dead, whom she credits for providing her with the grisly ideas.

She is often inundated with messages from followers complimenting her incredible creations, while others say she has a ‘dark mind’.

She said: ‘My favorite messages and comments are from the people who say they look up to me and that I’m the reason they started special effects makeup. 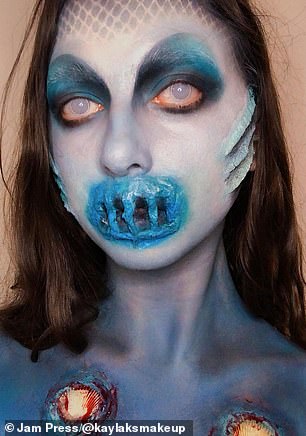 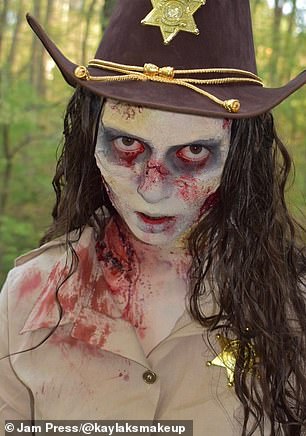 The queen of Halloween! On other occasions, she opts to create less realistic looks that would be perfect for All Hallow’s Eve 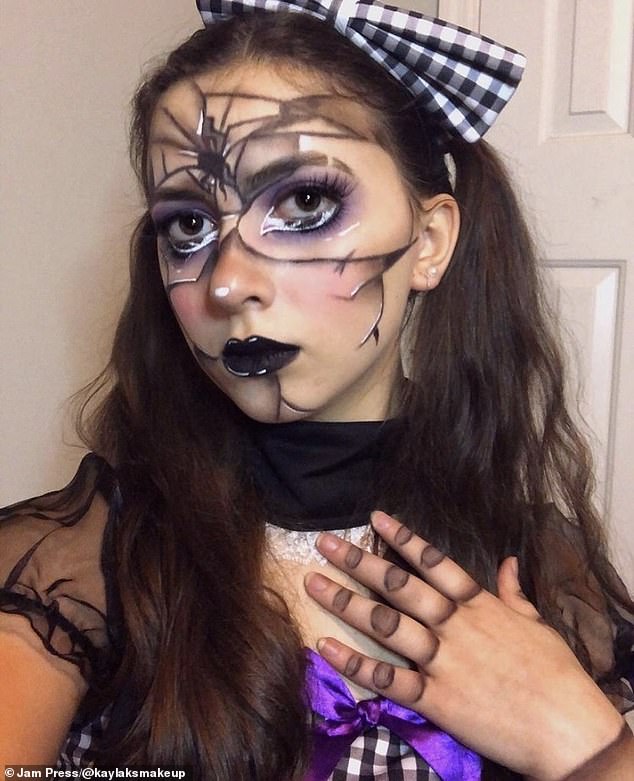 Advice: When offering words of wisdom to other aspiring makeup artists, Kayla said, ‘Be patient, take things slow and find your own style that stands out from everyone else’ 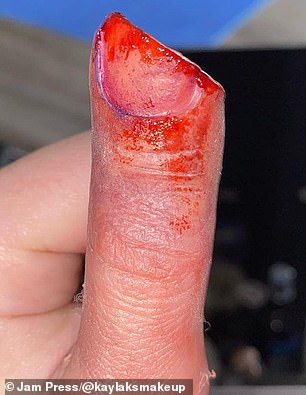 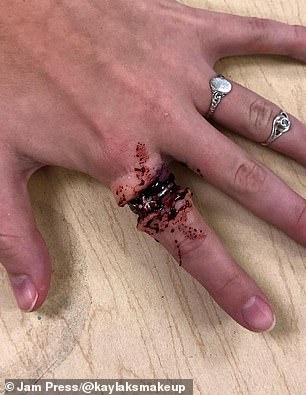 Spreading the word: Kayla says she is thrilled to have inspired so many people to try out special effects makeup for themselves 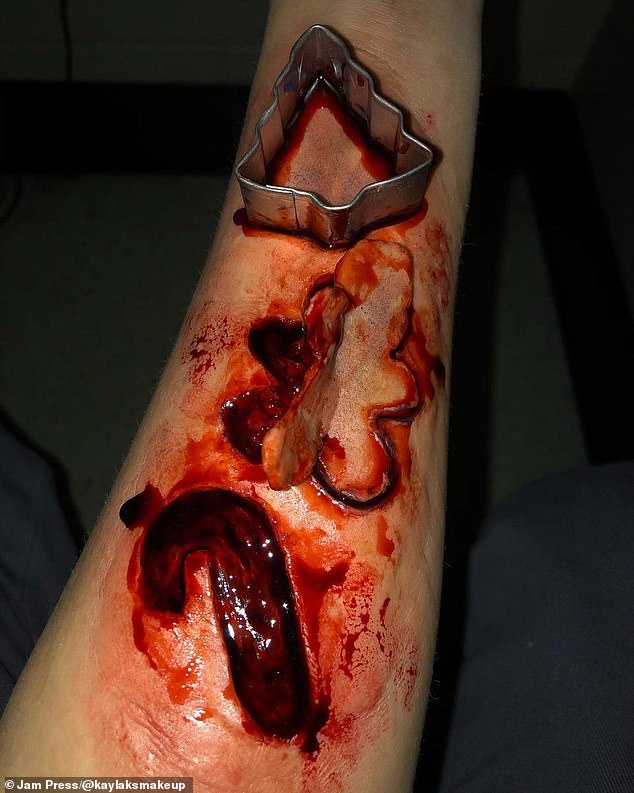 Talent: The teenager says she doesn’t think being interested in special effects gore means she has a ‘dark mind’ as some commenters tell her

‘It makes me so happy to be the person that could introduce others to this amazing industry.

‘I especially love seeing pictures of their work recreating my ideas and looks.

‘I highly encourage my followers to tag me in their posts or send me their work.’

However, not everyone is a fan of the gory style and Kayla is often on the receiving end of hateful comments.

She said: ‘Even though I get all of these heart-filling comments, there is still hate.

‘There are people who have stated that my looks aren’t realistic at all and how my work is rubbish.

‘There is constructive criticism, which I love to receive, and then there’s just plain harassment and hatred. 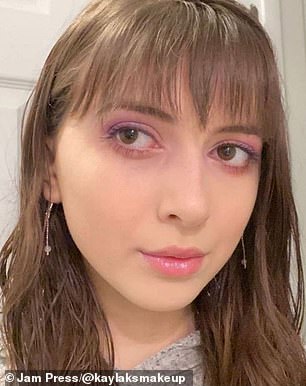 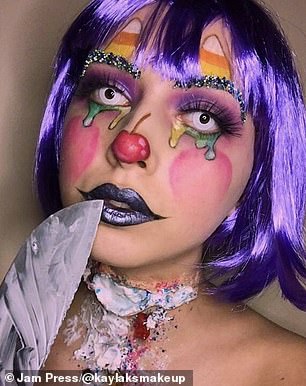 Trolls: ‘There is constructive criticism, which I love to receive, and then there’s just plain harassment and hatred,’ Kayla admitted

Stunned: All of her videos are flooded with comments from stunned viewers expressing their shock at how realistic her creations are

Warning: Others admit that the videos are too gory for them to watch

‘The worst comments I receive are the people saying how dark my mind is considering the gruesome looks I think of.

‘I’ve never been bothered by gore, I’m just creative and I love the art. I don’t see what’s wrong with that.’

For anyone hoping to recreate some of the artist’s looks, she said: ‘Be patient, take things slow and find your own style that stands out from everyone else. Be creative!

‘Also, don’t worry about whether or not you have the money to start doing special effects makeup.

‘Yes, products are expensive but you can find things to work with for very little price.

‘I started out with literally nothing. I found different things around my house to use that would be safe on my skin.’