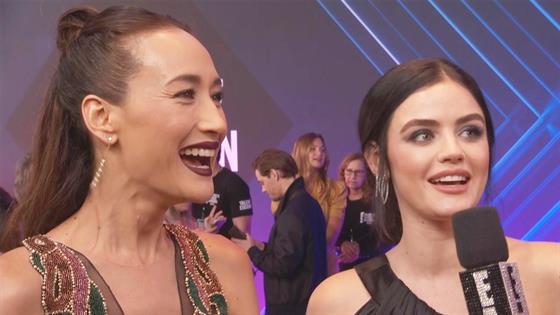 Lucy Hale and Maggie Q are teaming up to bring us the perfect Valentine’s Day date night movie. At the 2019 People’s Choice Awards, the two actresses stopped by to chat with E!’s Giuliana Rancic about their upcoming thriller Fantasy Island, set to release on Feb. 14 of next year.

As the two leading ladies stepped up to speak with Rancic during the PCA’s red carpet, Hale was caught on camera casually checking Maggie’s dress tag to figure out what designer she was wearing. “I got Sebastian,” Hale said.

“Oh really?” Maggie responded to Rancic’s question about who the actress was wearing. “Well, his first name is Sebastian.”

Of their upcoming film, Lucy gushed about how the two got to film Fantasy Island in Fiji for two months and “it was incredible.” According to Lucy, the two also had never met before they started filming and now they’re “very close.”

Maggie is also counting on the film being the Valentine’s Day movie, “so if you’re dating somebody that you want to get physical with, go and see this movie because you’ll have to… you’ll get scared.”

You heard her! Start planning your Valentine’s Day date nights.

According to the two, the film will be a “thrilling ride” and the movie will be a play on fantasies and how they can go awfully wrong.

Ahead of the awards show ceremony, Lucy also posted a selfie of the two on her Instagram Story, writing, “@maggieq – tune into the people’s choice awards for a fantasy island surprise.”

The fantasy/horror film will be produced by Blumhouse Productions and will also star Michael Peña, Jimmy O. Yang, Michael Rooker and more.

“I’m from Tennesse so I’m excited,” Hale said about presenting the award. To which her costar jokingly replied, “I’m not even close to Tennesse so it’s a little strange but I’ll be there.”