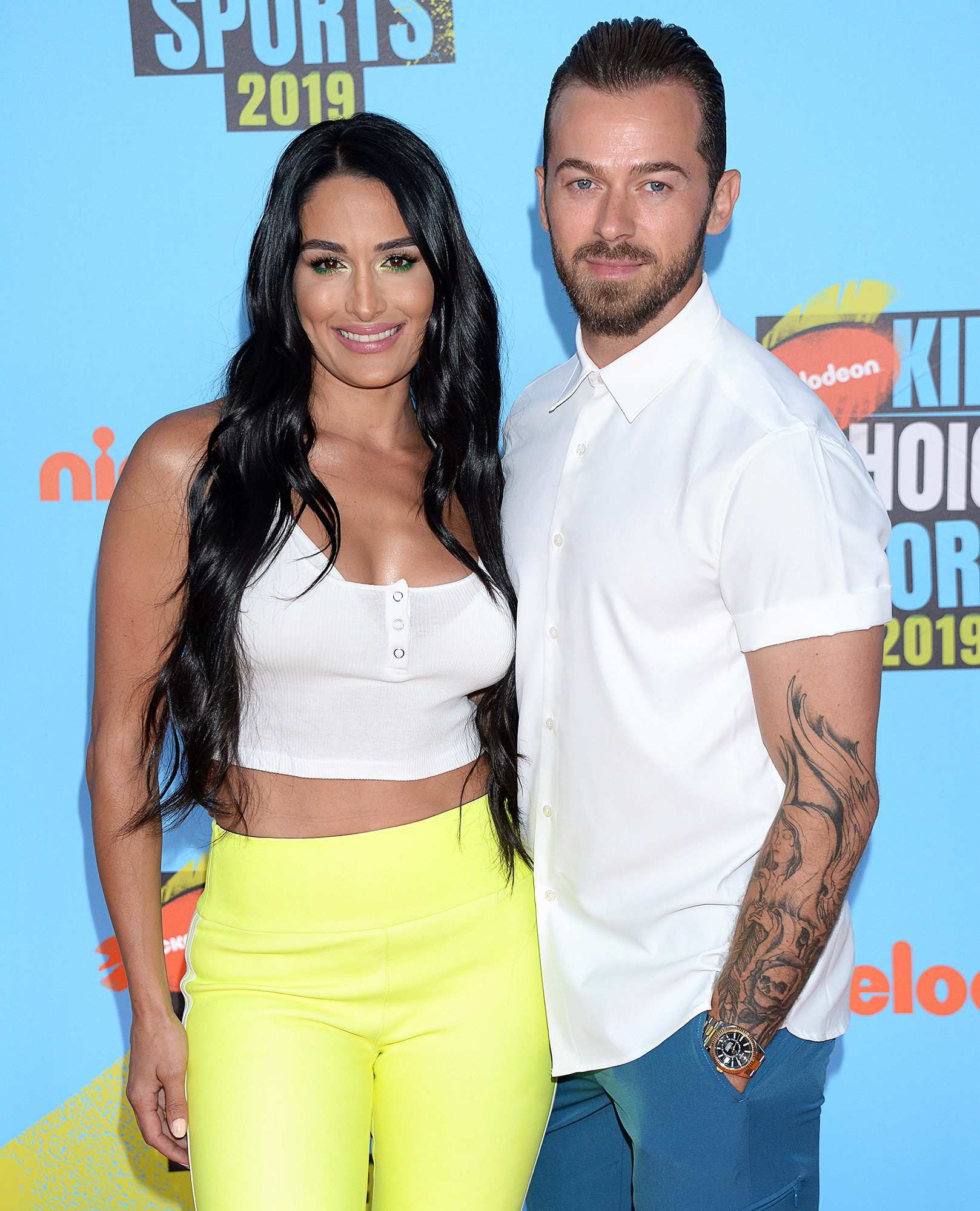 Setting the date! While Nikki Bella and Artem Chigvintsev initially had to postpone their wedding plans amid the coronavirus pandemic, the twosome have since been in full planning mode.

The California native noted that she and the 39-year-old Dancing With the Stars pro — who got engaged in November 2019 — have “just started” looking at venues and might have found one to “lock in” on their chosen date.

“Then, Brie’s gonna have to start getting busy because she’s Maid of Honor and I’m going to have to put her to work,” the Incomparable coauthor told Us at the Barker Hangar, where she attended the slime-filled ceremony alongside her twin sister, Brie Bella.

Brie, 38, jokingly told her sister: “Which means I’m going to have to give a heartfelt speech, not be drunk and have my s—t together.”

Nikki, who met the Russia native when they were partnered on DWTS season 25, teased that their nuptials may be filmed. “It might be on E!. So, the world may see it,” she told Us on the red carpet.

While the Total Divas alum — who welcomed son Matteo with the DWTS season 29 champ in July 2020 — has yet to pick out her wedding dress, she has big expectations for their first dance.

“[There’s] so, so much pressure,” Nikki added on Saturday. “I literally was telling Artem the other day, I go, ‘You need to start to choreograph it now because I want all summer to learn it so when we go in and do it, I know it like that, on the back of my hand. Easy.’ But I need to start now.”

The pair already picked out their wedding song, too. They chose romantic ballad “Can’t Help Falling in Love,” which was originally performed by Elvis Presley, for their first dance together. For the reception, the “Bellas” podcast cohost and Chigvintsev “really” like Haley Reinhart’s rendition and hope she’d be available to sing it live.

Nikki, who was previously engaged to John Cena ahead of their 2018 split, has been candid about why she and Chigvintsev have delayed their nuptials for nearly two years.

“Once I had Matteo and I started to raise him, I was like, when I say ‘I do,’ I want to make sure it’s forever,” the Total Bellas alum told E! News’ Daily Pop last month. “I know there are things that Artem wants too — like he really wants his parents [who live in Russia] there — but also, overall, I don’t want my son to go through a divorce.”

She continued at the time: “Already what we have going on in our house right now is amazing. It’s pretty much like a married life. … [I] really wanted to be with someone who was going to be an amazing father, and Artem is that.”

With reporting by Hannah Kahn

Listen to Us Weekly’s Hot Hollywood as each week the editors of Us break down the hottest entertainment news stories!