A month ago, my grandmother called to ask what I was doing for Thanksgiving. I told her I’d be staying put in New York City, where I moved from Florida last year. An hour later, she called again and said, “If I got you a ticket, can you come? I need help making the hallacas. You need to learn to make them before I die!" How could I possibly say no? My grandmother wanted to teach me about a major Venezuelan tradition celebrated by my family before she dies. I immediately accepted, though, had to eventually admit I knew very little about the hallaca-making process at all.

My grandmother was, of course, referring to our traditional, Venezuelan Christmas dish — the main course of the sit-down dinners held in Venezuelan households on Christmas Eve, Christmas Day, New Years Eve, or really, any day during the Christmas season. The process is complicated, to say the least, and requires multiple hands on deck. A hallaca is essentially a bundle of meat(s), veggies, nuts, and raisins individually placed on a sheet of yellow cornmeal spread on a plantain leaf, then wrapped and tied with cooking twine. Then it’s cooked in boiling water and served all throughout the Christmas season. But hallacas aren’t made overnight, nor are they made for a single serving. No, Venezuelan women make hallacas like the apocalypse is coming.

They make hallacas like they’re never going to get the chance to cook again and it’s their job to feed everyone they’ve ever met (and everyone they haven’t yet). They make hallacas in massive quantities: 50 to 100 at least, because the entire family is coming over on Christmas Eve, and because they want to give them to their neighbors, their friends, their bosses, their mailman (and the mailman’s wife probably needs some, too). Hallacas are made to last all month, if not months into the new year, and making them involves several days, lots of chopping, stewing, and cooking, and mostly, lots of patience. 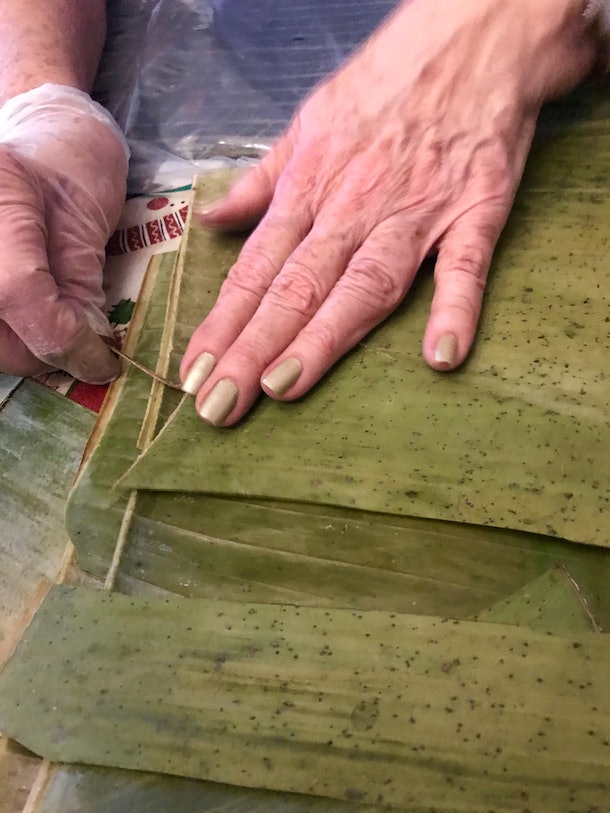 But it’s not all work and no play. Sure, making sure all the ingredients that go into the actual hallacas takes several days, but the day we put everything together is usually one hell of a party. Picture your grandmothers, your funnest aunts, your mom and your cousins all coming together around a table, drinking infinite amounts of wine and eggnog (or, as we call it, ponche crema), listening to Christmas music (or, as we call the tunes, gaitas), and gossiping nonstop about who’s marrying who, what the neighbor told his gardener, and did you hear about who the priest’s niece ran off with?

They complain about their husbands, laugh about their grandkids, and sometimes, they cry. They cry about the country they left behind and about how beautiful it was before a corrupt political regime took over its mountains and valleys and people. They cry for the people and places that shaped their lives, over the memories of family members they never got to see again, and over their mothers who taught them to make hallacas when they were growing up, participating in the exact same process they’re leading now — hundreds of miles away, decades later.

At its core, making hallacas is women bonding over a shared cultural tradition; it’s a huge part of a culture I’ve longed to feel closer to for most of my life, since immigrating from Venezuela in the late ’90s. My family strived to instill my culture in me as much as they possibly could, but when you grow up in a predominantly English-speaking environment, it’s not easy to juggle between who you are and who you think you should be. Twenty-one years after immigrating, I’m still not sure which one is which. But I can say without a doubt that I love my culture with my whole heart, and anything I can do to connect to it and feel like a part of it — a real part of it — I’ll do in a heartbeat. 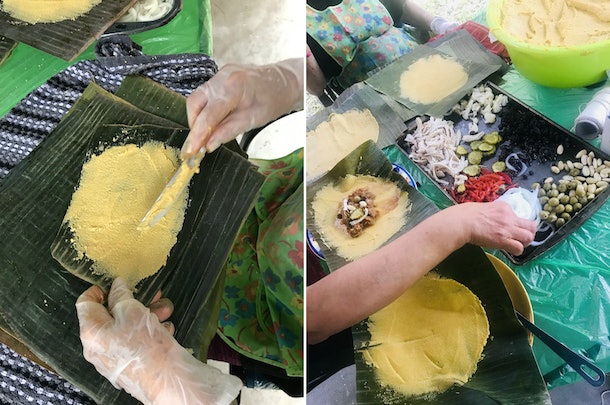 Watching my grandma and my aunts assemble the hallacas was like watching a choreographed ballet. You could see the muscles in their thin arms moving with every spread of cornmeal, scoop of filling, and plantain leaf wrap. They tasted everything every step of the way, fed each other spoonfuls of broth and dough, asking, “What is this missing?” and expertly answering, “Vinegar. It needs more vinegar. Maybe a little wine. Some salt, too.” Their fingers moved with precision as they tied each bundle in not one, not two, but sometimes four twists of twine.

My job, as with most first-timers, was to wipe the plantain leaves down and separate them into piles. Then, I learned to spread the cornmeal on the leaf in a thin layer, and later, to tie the finished bundles in twine. Before I knew it, I was tying bundle after bundle alongside the pros, in a rhythm I didn’t expect to be so easy. Twist, flip, twist, flip, repeat, tie. It became automatic — almost as if I was born to do it. When I mentally broke down what seemed like this big, intimidating, laborious, grown-ups only process into steps, I quickly realized that, when done right, it wasn’t as intimidating as I thought. The trick was doing it together. Everything’s easier when done in a team; there’s a reason people study in groups. There’s a reason it takes hundreds of bees to build a hive. 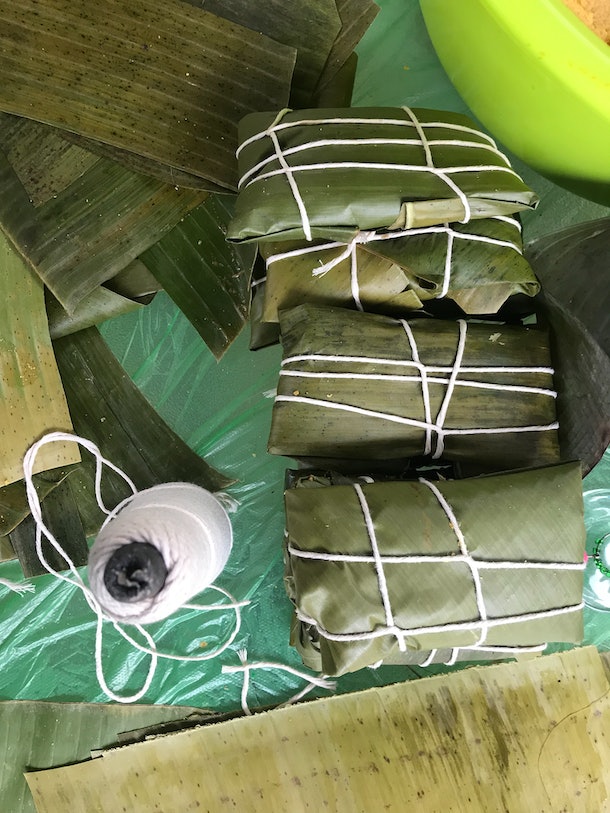 But it wasn’t all easy. We were hard at work from 8 a.m. to 11 p.m. At one point, my grandmother thought she had burned her first batch — over 50 hallacas. She let out a scream unlike any I’d ever heard, louder than when I used her red Chanel lipstick as a crayon at age 5, and even louder than when I crashed the car she bought me under the condition that I’d, you know, never crash it and always make the payments on time. I was unsuccessful at both of those things. No, this scream was louder. By the end of the process, my hands were dry, my back was aching, and I was covered in mosquito bites. I couldn’t help but notice that no men were involved in the process. When I asked if they ever helped, my grandmother said, “Sometimes. Not really? No.”

In America, the idea of "women belonging in the kitchen" is seeing its last days. In Latin American culture, it is widely known and usually accepted for women to play a more "traditional" role when it comes to matters of the home and the family. According to the Tulane University Roger Thayer Stone Center for Latin American Studies, there’s a name for this. It’s called marianismo — the counterpart to the commonly known term, machismo. Whereas machismo "is defined as the cult of male virility," marianismo "refers to the cult of female moral superiority, which defines the ideal woman as selfless, submissive, and possessing great spiritual strength." Tulane also notes that these traditional gender roles usually also dictate the division of labor, where women take on the duties associated with the family and the men, "by virtue of their supposed strength and assertiveness, are given exclusive domain over the public sphere. As a result, they are dismissed from any responsibility in the home," according to the Latin American Studies center at Tulane.

I couldn’t help but think of these gender roles while making hallacas with the women in my family. The idea that women "belong in the kitchen," is one that women have, time and time again, disproved. Women belong wherever we want to belong. But these women were OK with being in the kitchen for this process. They were OK with not getting any help from men that day. They liked being in the kitchen, and when I spent time with them, I began to understand why. I listened to them talk about their childhoods, their long-passed mothers, and the lessons they taught them, their ex-husbands and their grandchildren. They talked about how maybe one day they’ll go home again when we all know, deep down, that no one’s going home any time soon. I couldn’t help but think how different the process would be if men were involved.

Would these women still tell the personal stories they told? Would the process be as smooth, as delicate, as precise? Would there be an air of competition to it? Would the end result be the same? My grandmother’s nonchalant acceptance that, in this case, men simply don’t help and that’s seemingly fine surprisingly didn’t make me angry. Men don’t help here. Good, we don’t want them to. This is just for us. 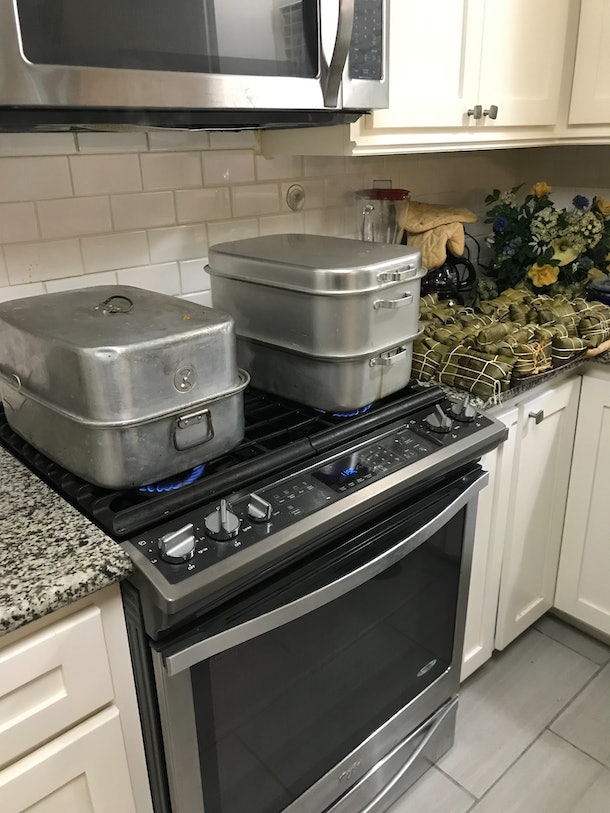 I flew home 48 hours later, at 6 a.m., more tired than I’d been in months, but feeling more empowered and more myself than I had in actual years. As an immigrant, I’ve struggled to define my cultural identity my entire life, and I’ve never managed to let myself feel comfortable with the reality that there is no one definition. It’s like I want to be both Latina and American and I know that I am both, but something inside me fights to pick just one. Why? That’s a question I still don’t have an answer for. But gathering around my grandmother’s table with my aunts over a shared tradition that serves not just as a practical way of cranking out hallacas, but of spending quality time together, being ourselves, bonding, and bringing in the Christmas season made me realize that, just like an hallaca, I’m not and never will be just one thing. I’ll always be a confusing, harmonious mix of lots of different things: ingredients that work when you put them all together; that blend to create something bigger than what was there before.