Lamia Al-Gailani Werr, who as one of the Iraq’s first female archaeologists helped her country’s national museum recover from the looting of its antiquities at the outset of the Iraq war, died on Jan. 18 in Amman, Jordan. She was 80.

Her daughter Noorah Al-Gailani said the cause was a stroke. Dr. Gailani had been in Amman attending a workshop that trains curators to help protect and promote the cultural heritages of Iraq and Syria.

Dr. Gailani built her reputation as a widely respected scholar, curator and writer over nearly a half-century, living mostly in London but returning regularly to Iraq to do research. Her trip back to Baghdad in the spring of 2003 was for a purpose more immediately critical than research. United States-led forces had invaded Iraq that March in a futile search for weapons of mass destruction, and for days looters ransacked the Iraq Museum in the capital city.

Walking into the building, she encountered staff members in the lobby. “They were in such a state of shock that I remember not a single one of them was able to finish a sentence,” she recalled in an interview with the BBC in 2016. “It was eerie and terrible to see the museum empty like that.”

Dr. Gailani was an expert on Mesopotamian stone cylinder seals, which millenniums ago were used to make imprints in clay as forms of identification. Most of the museum’s collection of 7,000 of them were stolen from the museum’s basement.

“The seals were in a corner, in small boxes put on top of a cabinet,” Dr. Gailani told the BBC. “How did the looters find it unless they knew where they were? You can blame anybody. They could be outsiders, but they’ve heard about them — or it could be people within the museum.”

Working through the Iraq Reconstruction Management Office, a creation of the United States State Department, Dr. Gailani helped assess the damage and catalog the objects that remained, found storage facilities for them and acted as an intermediary between the museum staff and occupying forces.

One of the most precious pieces recovered after the looting was the Bassetki, a 4,300-year-old copper sculpture of a seated nude human figure on a round pedestal. It had been hidden in a cesspool outside of Baghdad. When the soldiers who found it brought it to the museum door, Dr. Gailani met them and, she said, didn’t care at all about the odor. 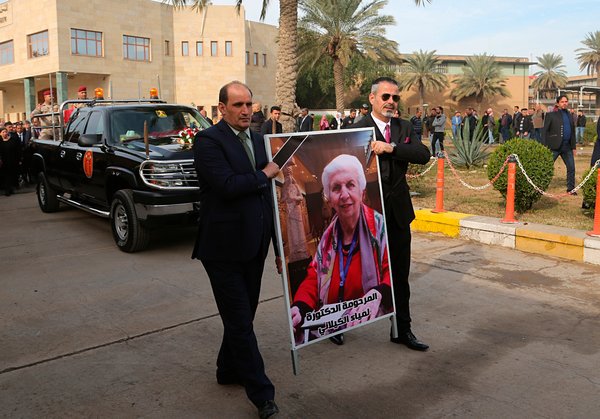 “It is an absolutely super piece,” she said in an interview in 2004 with Science magazine. “It has long been my favorite.”

Thousands of artifacts were eventually recovered, and the museum reopened in 2015.

Lamia Al-Gailani was born on March 8, 1938, in Baghdad, where she grew up with four siblings. Her father, Ahmad Jamal al-Din Al-Gailanilani, was a landowner, and her mother, Madiha Asif Mahmud Arif-Agha, was a homemaker.

Iraqi history ran deep in her family. Her father descended from Abdul-Qadir al-Gailani, a 12th-century Muslim theologian and mystic, and her lineage included the first prime minister of modern Iraq.

“Nobody in her family before her was in archaeology, but because her family is one of the oldest in Iraq, her sense of history was very keen,” Zainab Bahrani, a friend and professor of ancient Near Eastern and archaeology at Columbia University, said in a telephone interview.

Her archaeological education began with one year at Baghdad University before she moved to England, where she graduated from the University of Cambridge with a bachelor’s degree in archaeology and architecture. She earned a master’s at the University of Edinburgh and her Ph.D at University College London, where the subject of her thesis was cylinder seals.

Dr. Gailani joined the National Museum of Iraq in 1961 as a curator. One of her first tasks was to make clay impressions of the cylinder seals. But her ambition to join an archaeological dig in Iraq — fertile territory for excavations — was circumscribed by conservative Iraqi attitudes toward women. Still, she convinced the museum authorities that she was capable of the work, although in agreeing to take her on they limited her to excavating in the Baghdad area.

At Tell al-Dhibai, on the outskirts of the city, Dr. Gailani was part of a group that discovered a Babylonian town, complete with houses, a temple and an administrative building.

“The finds from the site, while not visually spectacular, were incredible important,” she wrote in an essay in the book “The Looting of the Iraq Museum, Baghdad” (2005), edited by Milbry Polk and Angela M. H. Schuster. Unearthed from the site were many cuneiform tablets, including one that was identified as a proof of the Pythagorean theorem, arrived at 2,000 years before Pythagoras lived.

Dr. Gailani was in the vanguard of female Iraqi archaeologists, joined soon by Selma al-Radi, Rajiha al-Ni’ami and Nawala al-Mutwali, a cuneiform expert who became director of the Iraq Museum. By 2003, many of the museum’s staff archaeologists were women.

A memorial to those who lost their lives in 2018

In her thesis, which was published in 1988 in the journal Bibliotheca Mesopotamia, Dr. Gailani described the elaborate impressions that the seals, carved with scenes in intaglio, made on clay tablets.

In one instance she wrote about Shamash, the Mesopotamian sun god, whose primary symbols on the tablets “are the saw or serrated knife and the human-faced bull.”

“He is most often shown standing with his foot on a stylized mountain or a reclining bull,” Dr. Gailani wrote. “Facing the god is a worshiper wearing a round cap with upturned brim and a long garment open in front, revealing one bare leg.”

McGuire Gibson, a professor of Mesopotamian archaeology at the University of Chicago, said in an email that Dr. Gailani’s thesis showed images of the seals that Iraqi teams had found in excavations.

“The information would, otherwise, probably have remained virtually unknown without her work,” he wrote.

In addition to her daughter Noorah, the curator of Islamic civilizations at Glasgow Museums, Dr. Gailani is survived by two other daughters, Azza Al-Gailani and Hesn Werr. Her first marriage, to Abd al-Rahman Al-Gailani, a second cousin and Islamic architecture historian, ended in divorce. Her second husband, George Werr, a Jordanian businessman, died in 2003.

The rampant thefts of the seals and other Iraqi Museum artifacts preceded the cultural catastrophe that befell the country in recent years when members of the radical Islamist group Isis destroyed many ancient art treasures and shrines in Syria and Iraq, like the supposed tomb of the biblical prophet Jonah in Nineveh, outside the Iraqi city of Mosul.

“Those were devastating and made us weep,” Dr. Bahrani, who had worked with Dr. Gailani, said. “She said the reason they went after the shrine was because it was sacred to all religious groups and by attacking it, they were attacking the riches and diversity of the culture.”

She added: “She was sad but she never gave up. She wanted to bear witness and wanted people to know.”