Labor has questioned why a cabinet minister appeared in a press conference earlier this year with a Liberal Party member who was under investigation by national security agencies for preparing an act of foreign interference. 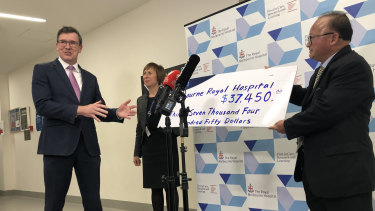 The arrest followed a year-long investigation by the Counter Foreign Interference taskforce, led by counter-espionage agency ASIO and the Australian Federal Police, which was probing his alleged connection with a foreign intelligence agency.

In June, Mr Duong attended an event at the Royal Melbourne Hospital with Alan Tudge, the Acting Minister for Immigration, Citizenship, Migrant Services and Multicultural Affairs. At the event, Mr Duong presented a $37,000 donation from his organisation, the Oceania Federation of Chinese Associations, to the hospital for COVID-related research.

Mr Tudge said the Oceania foundation was a "terrific community organisation", adding "I would give you a big hug but I'm not allowed to in these pandemic days, Sunny".

In Senate question time on Monday afternoon, opposition home affairs spokeswoman Kristina Keneally asked the government's leader in the Senate, Simon Birmingham, why Mr Tudge appeared with Mr Duong at a time when he was under investigation by ASIO and the AFP.

"How is it that Minister Tudge, part of the Home Affairs portfolio, was not advised against the appearance despite it being approximately eight months into the investigation by the Counter Foreign Interference Taskforce, led by the Australian Security Intelligence Organisation and the AFP?" Senator Keneally asked.

Senator Birmingham said it was "quite a sensitive matter" and he was "surprised" Senator Keneally would raise it "in the chamber in this way".

"Nonetheless, I can confirm that the AFP has charged a 65-year-old Melbourne man with offences," he said.

"People would expect … that AFP investigations are handled sensitively, confidentially, carefully and indeed that actions of government ministers during the course of those investigations also need to be given appropriate, careful conduct.

"I will come back with any information that can be appropriately provided to Senator Keneally without it jeopardising in any way the type of actions that do now find themselves before the court."

Senator Keneally also asked the government what action Prime Minister Scott Morrison had taken to ensure no member of his government had been "compromised as a result of foreign interference charges against a member of the party he leads".

The investigation by ASIO and the AFP at least partly focuses on Mr Duong's alleged activities in trying to influence figures in the Liberal Party's Victorian branch, security sources have confirmed.

The questioning comes after ASIO director-general Mike Burgess last week wrote to all members of Federal Parliament warning they were targets for foreign spies looking to steal Australia's secrets and gain a foothold in the nation.

"ASIO has identified foreign governments and their Australian proxies persistently seeking to develop relationships with politicians at all levels of government, in all states and territories," Mr Burgess wrote.

"Political staffers have also been targeted, and we cannot rule out a proxy trying to get access to you through an unwitting relative, friend or business contact."

The most important news, analysis and insights delivered to your inbox at the start and end of each day. Sign up to The Sydney Morning Herald’s newsletter here and The Age’s newsletter here.