Angry federal Labor MPs have rounded on colleague Joel Fitzgibbon amid a bitter spat over the party's climate policy, which threatens to further destabilise the leadership of Anthony Albanese.

Mr Fitzgibbon, who quit the shadow cabinet on Tuesday following a blazing row over his public comments on climate change, called on Labor's long-time energy spokesman Mark Butler to be removed from the portfolio on Thursday as MPs went tit-for-tat. 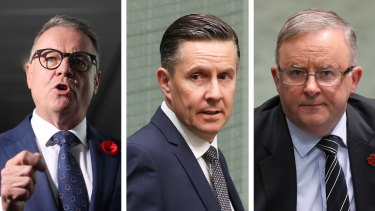 Victorian MP Josh Burns lashed out at Mr Fitzgibbon over his behaviour, calling his NSW colleague "self-indulgent" and a "random backbencher".

Several Left faction MPs, some close allies of Mr Albanese, told The Sydney Morning Herald and The Age on the condition of anonymity that they were "fed up" of Mr Fitzgibbon and they were not going to take his "disloyalty" any more.

Furious at their colleague for derailing the opposition's parliamentary week, MPs hit the phone in a organised campaign to label Mr Fitzgibbon a "disgrace", said he was "trying to secure a job in the resource sector" and said Donald Trump was "showing more grace in leaving his job".

Victorian Premier Daniel Andrews also offered a scathing assessment of the rebel federal Labor MP, saying that pretending taking meaningful action on climate change was not necessary is "not leadership".

He said his Canberra counterparts needed to follow in his government's footsteps by putting forward a progressive social reform agenda while creating jobs and building infrastructure.

"You can get into this denialism, 'Oh well, it's not real, I must tell everyone what they want to hear' – that's not leadership, that's nothing like leadership. What you got to do is make the transition and back the transition to work."

Labor figures point to their 2019 election review, which found climate change policy was a net positive among voters and recommended the party "cannot neglect human-induced climate change. To do so would be environmentally irresponsible and a clear electoral liability."

But Mr Fitzgibbon and several unions, including several state divisions of the Construction Forestry Maritime Mining and Energy Union and the Australian Workers Union have warned Labor has alienated its traditional blue-collar base.

He said on Thursday he was not leaving Parliament and would contest the next election and denied his resignation from the frontbench was courtesy of a post-election deal with his NSW Right colleagues to make way for Ed Husic after 18 months in the job.

Mr Fitzgibbon called on Mr Butler to move on from his portfolio ahead of next month's reshuffle because he had been in the job for seven years and had taken energy and climate change policies to two election defeats.

"I do think Mark can go to another senior portfolio — he's a smart guy, there are plenty of things he can do — but we need a new advocate bringing a fresh face and a fresh approach," he said. 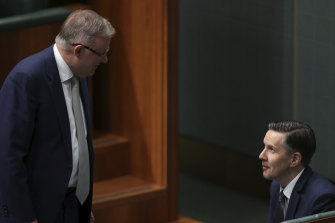 He said Mr Albanese and the shadow cabinet should visit coal mines, gas projects, abattoirs and manufacturing plants in regional NSW and Queensland.

"Shake some hands, show some love and thank them for what they are doing for their country," he said.

"They saw the devastation of the summer bushfires and know that under Scott Morrison Australia won't take any real climate action," he said.

"Australians want to embrace the opportunity of Australia becoming a renewable energy superpower, which will create hundreds of thousands of jobs, lower power prices, create new industries like hydrogen and batteries, and reinvigorate our traditional industries like steel and aluminium."

Deputy leader Richard Marles – touted this week as a potential candidate for Mr Albanese's job – said it was not the place for others in the party "to be calling on other members of the frontbench to resign".

"I think Mark Butler has been doing a superb job in his role, end of story," he said.

Mr Marles said Fitzgibbon "who has been an ornament to our party" and "a very important voice going forward", would continue to play an important role.