There are all kinds of end-of-the-year traditions, including checking out your top nine on Instagram. Even Kylie Jenner found her Top Nine, which she shared on her Instagram Story on Wednesday. If you’re a huge Kylie fan, then you can probably guess that the majority of her most popular posts of 2018 feature her daughter, Stormi Webster. There’s no denying the Keeping Up With the Kardashians star has had a truly memorable year, and especially as a first-time mom.

As you can see below, every picture is about Stormi, except for one. The only photo not related to Stormi is of Kylie and Kendall Jenner posing quite fiercely. It’s definitely a gorgeous photo of the sisters, so it’s no wonder the picture got so many likes. It’s also understandable why all of Kylie’s images with Stormi are so popular, especially since her pregnancy was a huge mystery filled with some intense fan theories. Kylie didn’t confirm her pregnancy until after she gave birth to her daughter.

Pregnancy rumors first began in September 2017, and Kylie revealed she had given birth on Feb. 4, 2018 with a post not only welcoming her baby girl into the world, but also explaining why she and Travis Scott chose to keep the news private. "I’m sorry for keeping you in the dark through all the assumptions," part of her post read. "I understand you’re used to me bringing you along on all my journeys. my pregnancy was one I chose to do in front of the world. I knew for myself I needed to prepare for this role of a lifetime in the most positive, stress free, and healthy way I knew how." 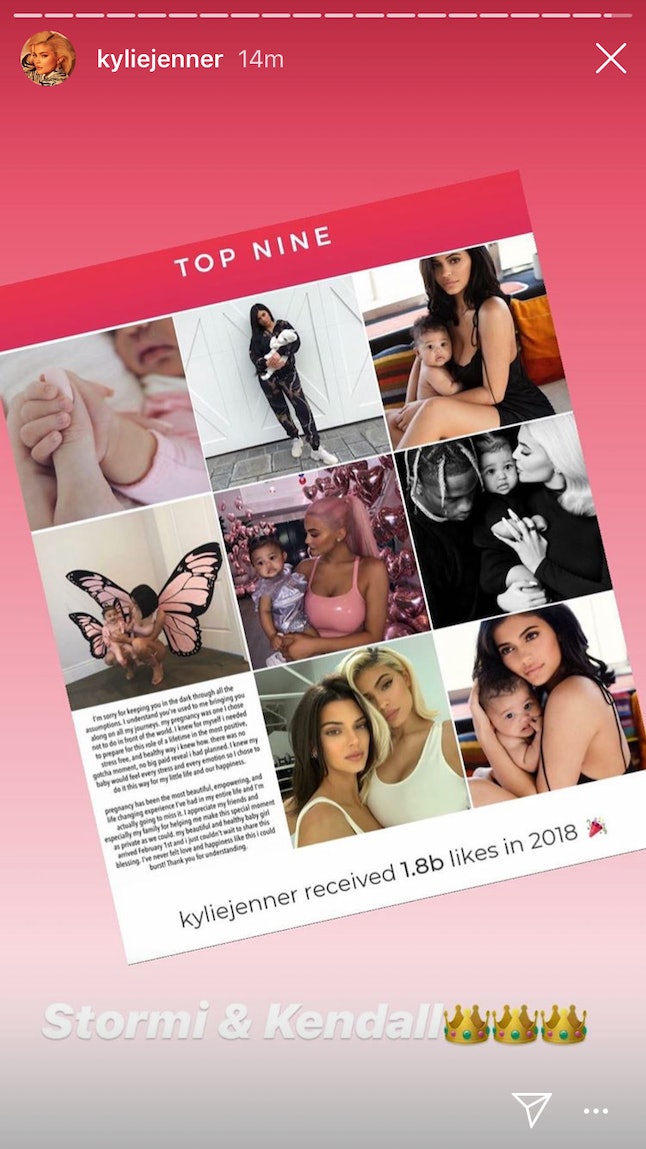 Yes, Stormi’s birth announcement is one of Kylie’s top nine, and so is Stormi’s name reveal. On Feb. 6, the reality star posted a photo of Stormi holding Kylie’s thumb and wrote, "stormi webster". As you can see, announcing her daughter’s name to the world is Kylie’s no. 1 top moment of this year — at least on Instagram. The other images feature more sweet moments of Kylie’s family, including an adorable picture with Scott and Stormi.

The two close-up photos of Kylie wearing black and holding Stormi were shared around the Life of Kylie star’s Aug. 10 birthday. She even captioned the one image, "bringing in my birthday tonight with my most special gift. What was life before you, Stormi. I love you my little angel." The other photo she wrote, "my heart."

Also, let’s not forget to discuss how Kylie received over 1 billion likes this year — whoa! That is a lot of followers double tapping your post, but also totally unsurprising.

Kylie has over 120 million followers and earned the Instagram achievement on Feb. 7 (only three days after announcing Stormi’s birth) of having the most-liked Instagram photo. Of course, the picture is of when Kylie shared Stormi’s name with the world for the very first time. At the time this article was published, the highly-popular photo had over 18 million likes. So, yeah, Kylie earning 1.8 billion likes in 2018 makes complete sense.

Some might find the top nine on Instagram silly, but it’s a fun way to look back on your year and to also relive some memorable moments. For Kylie, she can now take a walk down memory lane and cherish all of the special moments she’s made with Stormi thus far.

Sharon Watts (Letitia Dean) faces quite the dilemma in EastEnders, as she’s seemingly starting to realise that giving baby Kayden...