Messy doctors spend £20,000 transforming their cluttered Victorian terrace, but Kirstie and Phil’s Love it or List It viewers insist they just needed to give it a ‘good clean’

Viewers of Kirstie and Phil’s Love it or List it last night slammed a ‘messy’ couple who spent £20,000 transforming their cluttered Victorian terrace home, with many insisting they just ‘needed a good clear-out’ instead.

In last night’s episode of the Channel 4 show, Kathleen, from Newcastle, said she loved the three-bedroom house, while her husband Tom wanted to sell because their terrace was ‘too small’ for their four-person family.

The couple, who both worked as doctors, allocated £20,000 for renovations to create a large kitchen-diner and change their current kitchen into a playroom for their daughters, before they decided to stay in the property.

But viewers slammed the renovation on the show and deemed it ‘impractical’, with one commenting: ‘How long will it take them to fill the new layout with s***? I’d hate to think that my doctor could be so disorganised and messy,’

Kathleen and Tom, from Newcastle, spent £20,000 transforming their three-bedroom Victorian terrace home on last night’s Kirstie and Phil’s Love it Or List It – but viewers were unconvinced by the renovation and said the couple ‘just needed a good clear out’ (pictured, their dining room before the renovation) 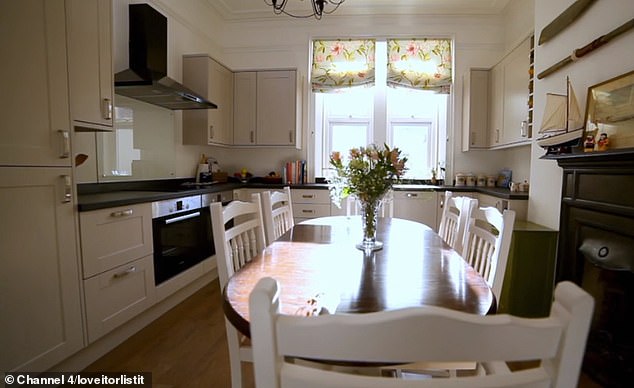 They transformed their unused ‘dumping ground’ dining room into a stunning kitchen-diner as part of their renovation (pictured, after the renovation)

One explained: ‘A playroom will just get turned into a dumping ground and dead space.

‘It also says to children – this is where you spend your time when you’re downstairs, separate from us. But yes, I do see bike workshop on the cards.’

At the start of the project, the couple were divided on leaving their terrace home, which had become a mountain of clutter and featured a disjointed layout.

They had been toying with the idea of selling the home for four years, with Tom pointing out that the house didn’t have off-road parking or a garage. 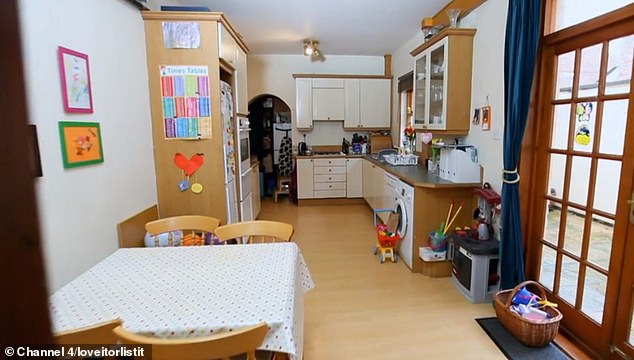 Meanwhile Tom said he disliked the disjointed layout in the terrace home, which featured a small kitchen at the back of the house (pictured, the kitchen before) 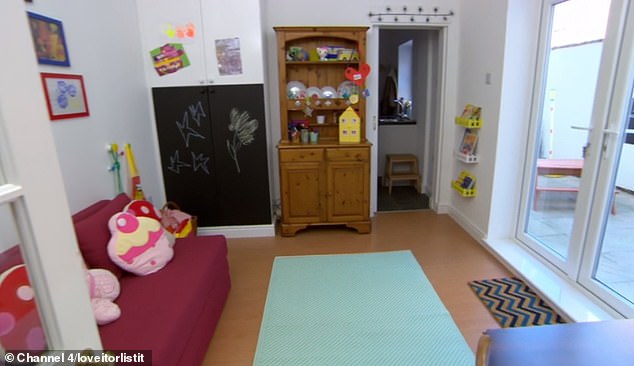 Viewers were baffled by the couple’s renovation, which saw them transform their former kitchen into a playroom and utility space (picture, the converted playroom)

But Kathleen revealed the home did, in fact, have a garage – but it was packed full of Tom’s sporting equipment and clutter.

The sports-mad Tom, who owned five bicycles and four boats, wanted instead to move to a big house in the countryside.

Tom explained: ‘I think this house has become dysfunctional and how we use it.

‘We’re constantly shouting through to each other and the back room, it’s just noisy. I think it’s time as a family we move on and have more space.’ 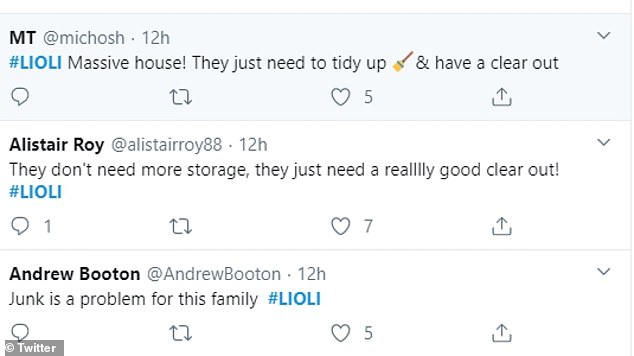 Viewers were unconvinced by the renovation, with some calling the layout ‘impractical’, while others saying they just needed to tidy their current home

Meanwhile Kathleen said: ‘I could be quite happy to stay here forever.’

And she insisted it was Tom’s clutter which was leaving them without space in the house.

The couple had a tight budget of £20,000 to transform their home into the ‘forever home’ they’ve always wanted. 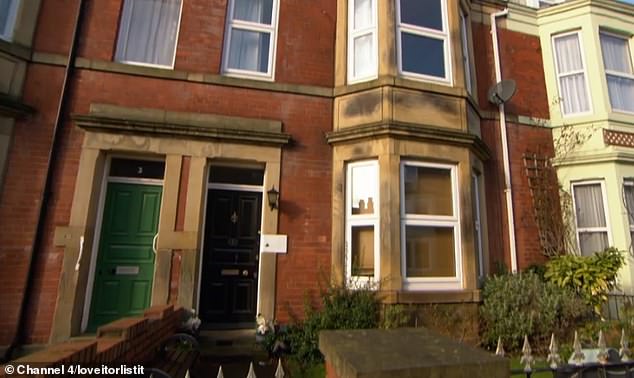 The couple had been toying with selling the three-bedroom terrace home for four years, with Tom insisting it didn’t have enough storage for the family

Kirstie quickly revealed she could solve their problems by changing their former unused dining room into a kitchen-diner.

She said: ‘There’s so many small things you could do to make it so that you can live in this house.’

She explained that the couple could also do a ‘nifty bit’ of demolition in order to solve the storage crisis.

Kirstie also suggested changing their dated kitchen into a utility room and a playroom for the girls.

Kathleen and Tom were divided over selling their three-bedroom home, with the couple toying with the idea for four years

Six weeks later, the builders moved in while the Mackies left their home.

The dysfunctional kitchen quickly vanished as builders demolished walls and divided the space into a playroom for the girls and a utility room.

But Kirstie also told the couple they had to consider removing a lot of the mess from their home, saying: ‘I genuinely think it’s a good idea to get a skip.

‘Send the girls to your parents. The chuck-out is going to be life changing.’ 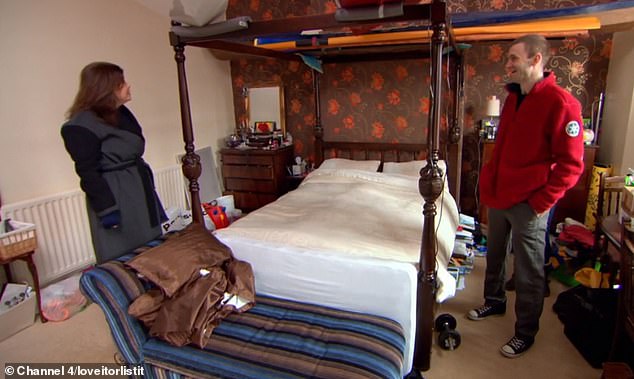 The couple’s home had become a ‘dumping ground’ for clutter, with the pair struggling to find space for Tom’s four boats (pictured, their bedroom before the renovation)

Two months later, the couple finished the transformation on the Victorian terrace, with Kirstie and Phil returning to the home to see the results.

The dining room, which had been drowning in clutter before the renovation, was transformed into a sophisticated kitchen-diner.

Kathleen explained: ‘It’s great because we have a cupboard for everything. If we want to go to the beach, we just pull out the beach cupboard.’ 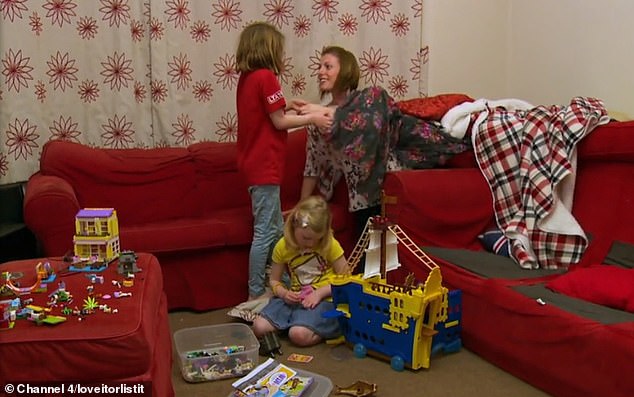 Tom felt the house was too small for the family-of-four, while Kathleen insisted it was a great family home (pictured, Kathleen with their daughters in the sitting room)

And after Kirstie asked the couple if they wanted to love or list the home, Tom explained: ‘What I want doesn’t quite align with what Kathleen wants.’

Kathleen explained: ‘I loved it to start with, and I love it even more now that all the changes have taken place.’

Tom said: ‘Do I love this house? The answer is no. We’ve had a lot of angst about what to decide to do. Hand on heart, Kathleen does not want to move out of town. So we’re going to love it.’

Kathleen explained: ‘You’ve had to make a lot of compromises to stay here. You’ll get your dream house in a few years, probably.’ 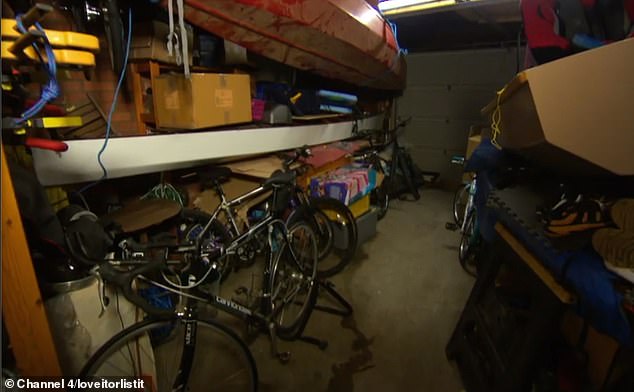 While Tom said the kitchen was ‘lacking a garage’, his wife pointed out that they had the space, but it was filled with his sporting equipment 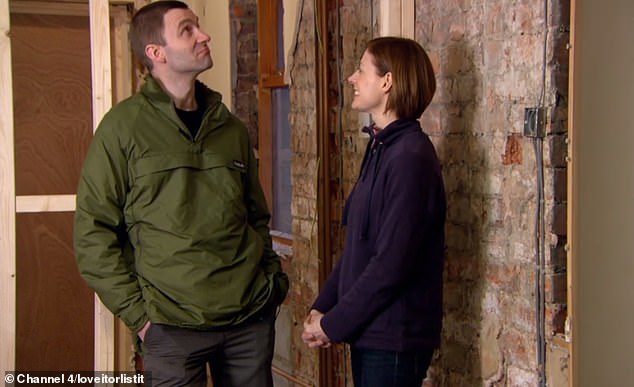 Kathleen was determined to stay in their home, and said she hoped that the new utility room and playroom would help tackle clutter in the house (pictured, during the renovation)

But viewers were highly critical of the couple, with many saying they didn’t need to transform their home in the first place, but just needed a good clear-out.

One said: ‘Slightly worried that two well educated, professional people can’t see that all they need is a good tidy up and clear out. But then, they wouldn’t get on the telly.’

Another wrote: ‘This episode is ridiculous. A playroom? For your already school age children? Let them play in their bedrooms. And don’t even start me on the sheer amount of clutter that’s making your house appear too small for you!’

Another said: ‘Massive house! They just need to tidy up and have a clear out.’ 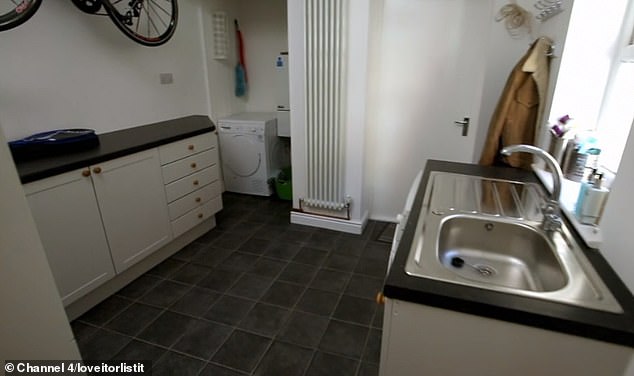 The couple said they were overjoyed with the utility space, explaining that it gave them ‘first defence’ against Tom’s excessive clutter