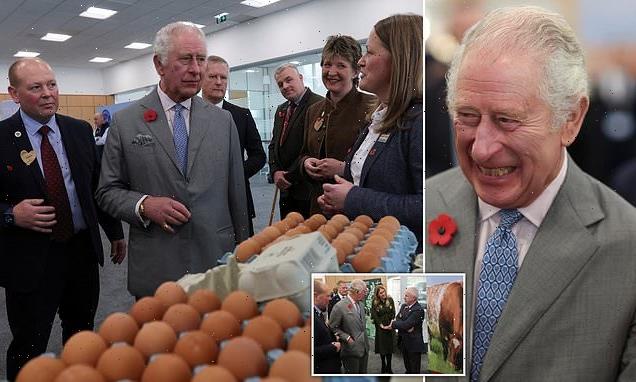 Cheerful Charles! King is in high spirits as he visits Morrisons head office to learn about farming during a two day visit to Yorkshire – hours before release of The Crown’s latest controversial series

King Charles appeared to be in high spirits today as he visited the headquarters for supermarket giant Morrisons – hours before the release of the controversial fifth series of The Crown.

The monarch was beaming as he arrived at the head office for the engagement this morning in Yorkshire, where he met people from Morrisons Farming, Community, Sustainability and Apprenticeship programmes.

The royal was given a tour of the facility and met with The Lord Lieutenant of West Yorkshire, Ed Anderson, as well as the Chief Executive of Wm Morrisons Supermarkets, Mr David Potts.

He was greeted by hoards of royal fans, many of whom had gathered in crowds and were waving union flags as they welcomed the King to the area.

It comes as the royal family brace themselves for the release of The Crown’s fifth series – which has prompted friends of the King to call for a boycott. 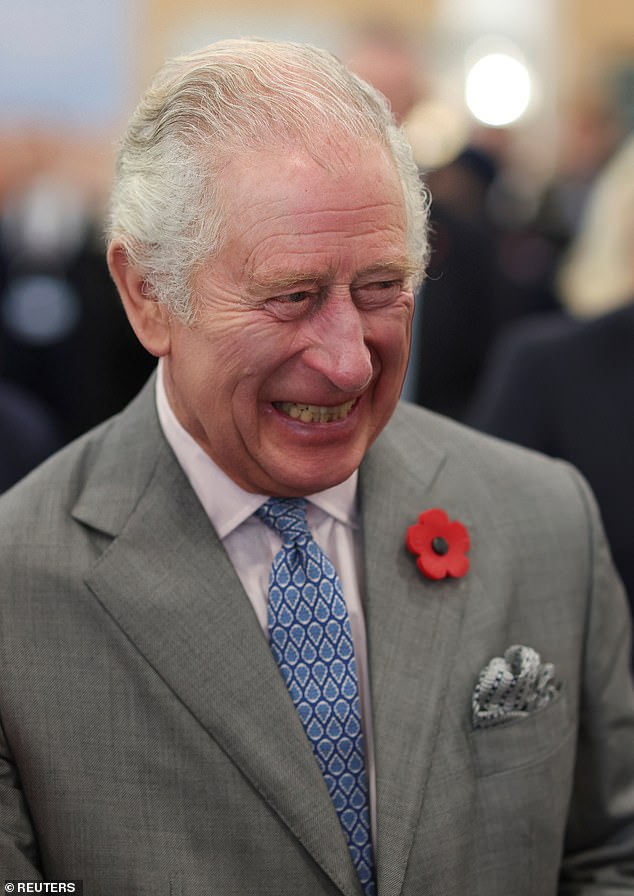 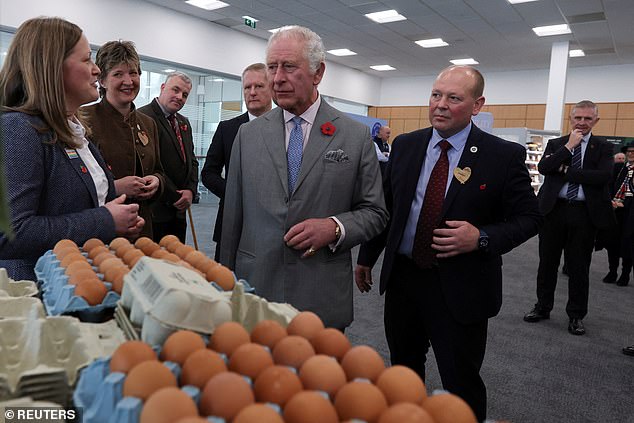 The royal was given a tour of the facility and met with The Lord Lieutenant of West Yorkshire, Ed Anderson, as well as the Chief Executive of Wm Morrisons Supermarkets, David Potts

Charles, dressed in a smart grey suit, pink shirt and blue tie, was in high spirits as he arrived at the event, beaming as he was introduced to different members of staff at the office.

There, he viewed  Morrisons farming, sustainability and retail initiatives including their rare breed programme and the recently launched carbon-neutral eggs.

He also heard about the supermarket’s approach to helping their customers with the cost-of-living crisis and the work they do to support the communities they serve. 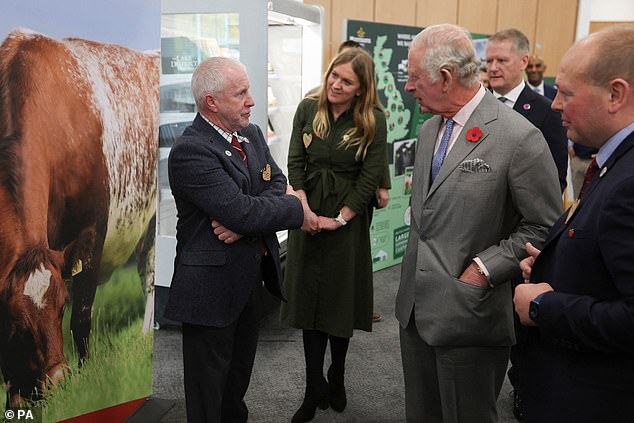 Charles, dressed in a smart grey suit, pink shirt and blue tie, was in high spirits as he arrived at the event, beaming as he was introduced to different members of staff at the office

Charles moved to the test and development kitchen to view new produce, which will include seeing some locally supplied products, and speak to local suppliers.

Earlier this week,palace insiders disputed claims that King Charles had given his blessing to actor Dominic West, who plays a young Prince Charles in the new series of The Crown.

West told the Radio Times that, after landing the role with the Netflix programme, he wrote to the palace offering to resign from his position as a charity ambassador for The Prince’s Trust. West claimed he received a reply stating: ‘You do what you like, you’re an actor. It’s nothing to do with us.’ 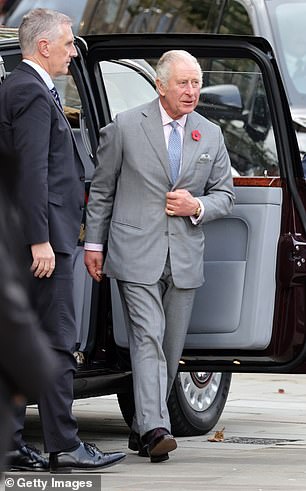 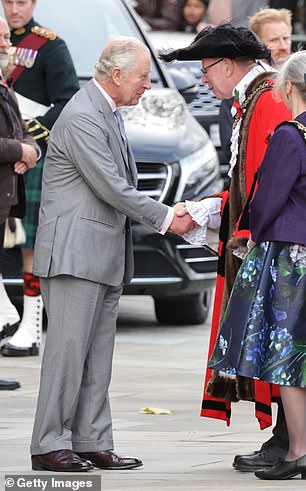 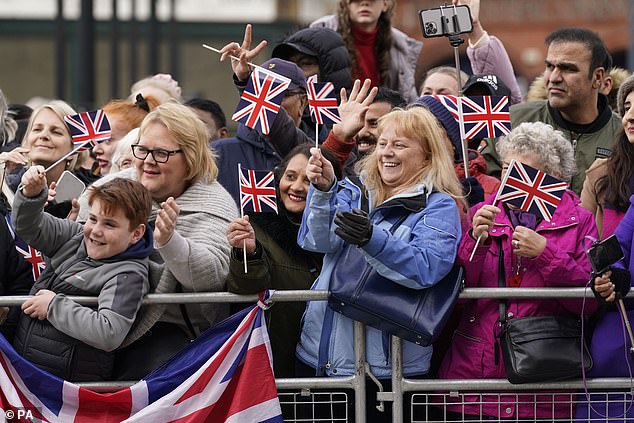 Crowds had gathered outside the city hall, with many waving union flags as they welcomed King Charles

However, palace insiders said ‘recollections may vary’. They said the actor did indeed write to the King’s office and received a letter back from a senior aide.

But they said the reply did not offer any indication that the King approved of West’s decision to take the role.

A Palace source said: ‘By relaying this anecdote about private correspondence, the implication is that His Majesty’s office gave tacit agreement or condoned the programme in some way. This is not the case.’

Buckingham Palace and the Prince’s Trust declined to comment.

It has also emerged Netflix will place a notice that The Crown is a ‘fictionalised dramatization inspired by real events’ upon it’s release tomorrow. 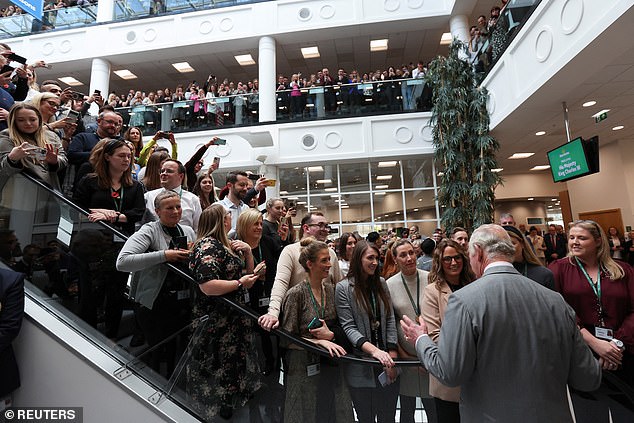 He was greeted by hoards of royal fans, many of whom had gathered in crowds and were waving union flags as they welcomed the King to the organisation 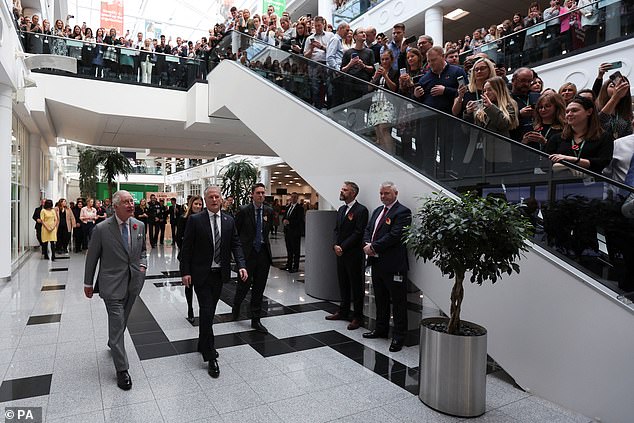 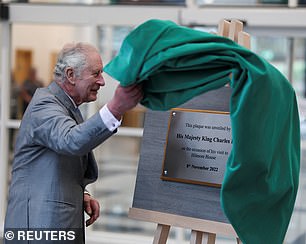 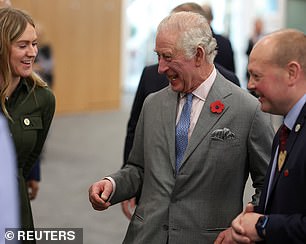 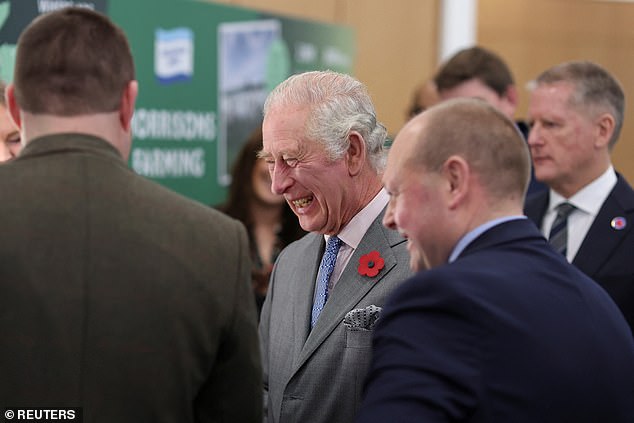 The US streaming giant plans to place a ‘fiction warning’ on the home page where viewers click to play episodes, which critics last night blasted as a fudge.

Netflix has been under growing pressure to introduce a disclaimer for The Crown amid fury over its faked storylines based on the Royals.

The Mail on Sunday previously revealed the fury of former Prime Minister John Major, who called the big-budget drama ‘malicious nonsense’ over bogus scenes in the latest series in which Prince Charles plots to force his mother the Queen to abdicate the throne. Friends of King Charles III called for a boycott over the scenes.

Sir Tony Blair also revealed his anger over the show this week, with a spokesman calling The Crown ‘complete and utter rubbish’ over its fake storylines.

Netflix has resisted calls for a disclaimer on episodes but recently included one on a trailer for the latest series, which is released on Wednesday.

Royal expert Thomas Blaikie said: ‘Netflix is trying to have its cake and eat it too. If it is going to finally put a disclaimer on, it should be at the start of every episode. As it gets nearer to the present day, it becomes more concerning when the series departs dramatically from what actually happened.’

David Mellor, a cabinet minister under Major, said: ‘The reality is that Netflix does not want people to think this is a total fabrication. They want people to watch it on the basis that there’s a lot of truth in the story so anything that draws attention to the viewer that this is a pack of lies is not in their own best interest.

‘By putting a disclaimer tucked away on the Netflix page they can claim that they are being clear to people that this is fictionalised when really they are not being clear at all.’

Royal biographer Sally Bedell Smith said: ‘They should put a big warning right at the beginning in black and white stating that it is a fictionalised drama. Doing anything other than that is totally disingenuous.’