Here is some happy news for this Southern Charm star: Kathryn Dennis is dating Hunter Price, the Bravolebrity confirmed recently in an Instagram posted on Jan. 19. Next to a cute photo of the couple all dressed up and cuddled closely together, Kathryn simply wrote a black heart emoji and tagged Price. He shared the same photo with a different filter, but he accompanied the image with the same emoji. This appears to be the first time either have appeared in a post on each other’s Instagram pages.

Well, the reality TV star did. After one fan asked her, "Who’s this?", the Charleston, South Carolina resident replied, "My person." Kathryn even commented on Price’s photo with her, "Lil chicken nugget [black heart emoji]." He responded with the backhand emoji showing the index finger pointing up, "HoneyMustard."

Hmm… could these be their nicknames for one another or possibly terms of endearment? Or, maybe, they just really like eating McDonald’s together? Whatever the case, there’s no denying Kathryn seems very happy with her "person."

If you’ve never heard of Price, not only is he a country singer, but you also might recognize him if you’re an America’s Got Talent fan.

During his Season 13 AGT audition, Price was thrown a curveball when Simon Cowell stopped him mid-song (he first sang Bryan Adams’ "(Everything I Do) I Do For You" for his mom) and said, "I think what you were doing was very generic." Cowell continued, "I think you have a good voice, so what’s missing here?" 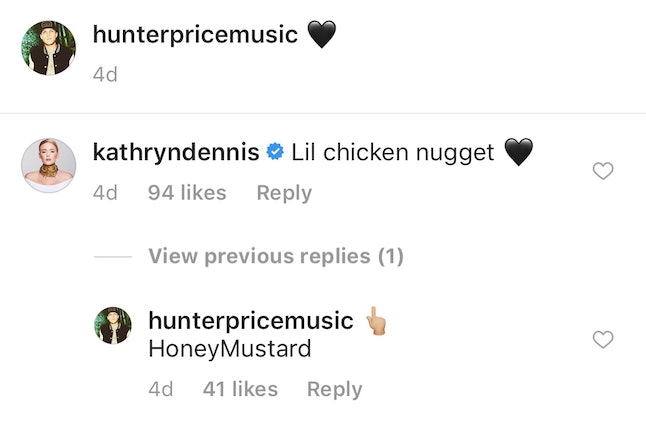 Eventually, Price revealed he looked up to Taylor Swift and then was given the chance to sing a second song, an original titled, "Left Behind." The audience and the judges enjoyed Price’s own song with Mel B telling him, "That was much better." Price was lucky enough to advance to the next round.

Unfortunately, Price was eliminated from AGT during the Judges Cuts round. According to his Instagram, currently he’s an "unsigned artist" living in Nashville, Tennessee. As difficult as it is to break into the music industry, at least he now has Kathryn by his side supporting him. It’s unclear how the two first met or how long they’ve been dating, but they sure look smitten with each other.

There’s no denying Kathryn deserves some happiness in her life. She’s been through a lot over the past few years as a single mom of two kids from her previous relationship with ex Thomas Ravenel. She’s also dealt with both addiction and depression. As Southern Charm fans know, Kathryn has come a long way since Season 1 of the show and has worked extremely hard to improve her life not only for herself, but for her children.

And look at her now. She still seems to be doing well and living her best life possible. It’s good to see Kathryn smiling and happy.