After 15 years of silence Kate’s mother Carole Middleton reveals she used to work at John Lewis, has five dogs and would never live in London 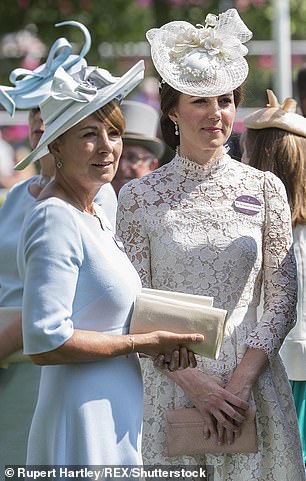 This week Carole Middleton, 63, broke royal and personal protocol to give an interview. Understandably, she was loathe to talk about Catherine, pictured with her

Carole Middleton, successful businesswoman, owner of by far the best legs in royal circles and granny to the future King of England is Christmas-mad.

Her festive preparations are akin to a military operation.

The minute her professionally carved Halloween pumpkins hit the compost heap, she starts making festive lists, browsing cookery books (Mary Berry is a current favourite, but oh, that she would go a bit lighter on the cream) and planning the Christmas menu — this year a vegan option will be available in the wood-panelled dining room of Bucklebury Manor in Berkshire.

No wonder poor Wills and Kate will be gutted to be missing out on Carole’s extravaganza for the second year running. For there’ll be mince pies, mulled wine and mistletoe on tap; bowls brimming with walnuts and teetering piles of clementines everywhere.

And trees! Real, naturally, harvested from the Yattendon Estate that flanks the Middleton’s nearby business HQ, and in every size because, for Carole, Christmas is not complete without at least a dozen.

The centrepiece is an extra-large tree that complements the tasteful creams and beiges of the Grade II-listed home where the Middletons have lived since 2013.

But there will also be a ‘memory’ tree with baubles and angels dating back well beyond their years at Oak Acre (their previous home where William once landed his Chinook helicopter in the garden), to their life before in their very cosy Victorian semi in the nearby village of Bradfield Southend. 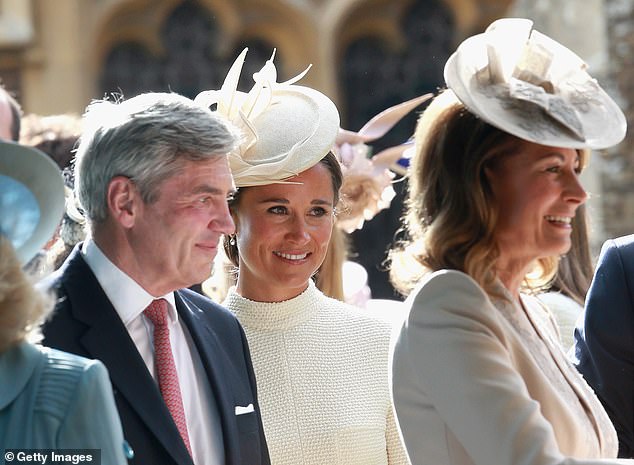 Michael Middleton, Carole Middleton and Pippa Middleton are seen at Princess Charlotte’s christening in July 2015. Poor Wills and Kate will be gutted to be missing out on Carole’s Christmas extravaganza for the second year running

That’s just for starters. She also thoughtfully pops a tree in her grandchildren’s rooms so the older ones ‘can decorate it themselves’.If all this sounds like something out of a glossy magazine, that’s because it is.

After 15 years of dignified silence — ever since her eldest daughter Catherine and Prince William started dating in 2003 and made what she calls the ‘Catherine impact’ on their lives — this week Carole, 63, broke royal and personal protocol to give an interview.

Understandably, she was loathe to talk about Catherine, now Duchess of Cambridge, or her royal grandchildren. And she certainly didn’t let slip the bitterly disappointing news that, contrary to expectations, Kate and Wills will be at Sandringham, not with the Middletons on Christmas Day as expected.

Nor did she touch on her other daughter Pippa and her husband James Matthews, fund manager and the future Laird of Glen Affric, and their newborn Arthur. Or even son James, currently single after a stop-start relationship with TV presenter Donna Air.

But we do now know a lot more about Party Pieces (the multimillion pound business Carole set up in 1987 and runs with her husband Michael, selling over 7,000 products ranging from hen party tiaras to inflatable dinosaurs), Carole’s passion for Christmas and a few other things that make her heart soar.

She loves comedian Michael McIntyre, adores cooking, loves Farrow & Ball ‘Cord’ and ‘Hay’ shades of beige, has four spaniels and a golden retriever and would hate to live in London.

She never gets stressed and is partial to a soya latte having recently gone vegan/flexitarian to combat an unwelcome gentle thickening around the middle.

And who would have guessed that, along with Burford Garden Company in the Cotswolds, Peter Jones in Sloane Square — where she occasionally makes use of a stylist — is one of her favourite shops in the world?

‘The staff are lovely and they all know me,’ she says. 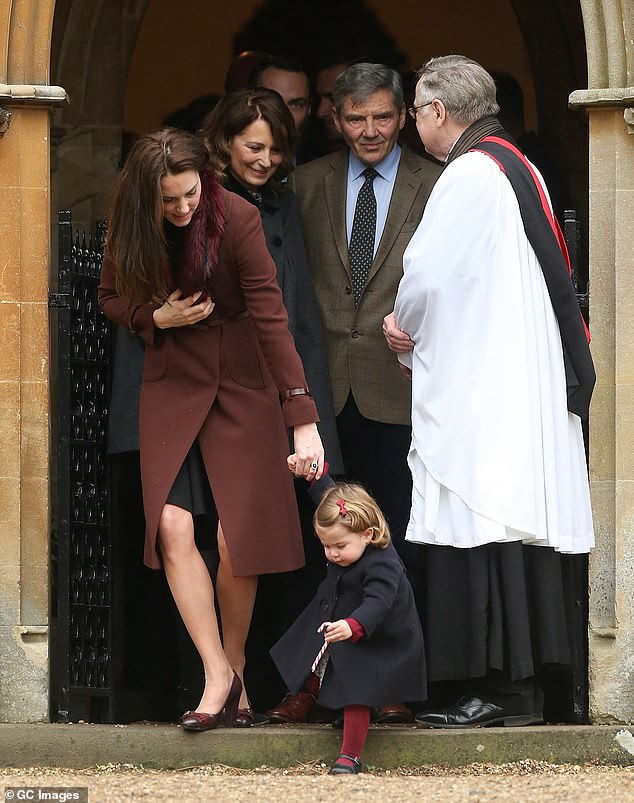 The family are pictured leaving church in December 2016. Carole, pictured behind Catherine, sounds like the world’s best granny. Not just because Carole looks about 50 and has more energy than most 20 year olds — but because she’s fun

She even had a job there, back in the day, on the John Lewis A-Level trainee scheme, working happily in china and glass until she was told she had to do six months on the shop floor and packed it in. ‘I thought, I’m not doing that for six months — it was really boring.’

But back to Christmas, because nothing really gets Carole quite as excited. Every year she adopts a different wrapping theme for her gifts. ‘All red, or all craft paper, or make a big thing with the ribbons,’ she says. When all the shopping’s done, she and Michael enjoy joint wrapping sessions accompanied by Christmas carols.

Come the big day, she’ll will be dressed up to the nines — possibly a red dress from designer label Goat — ‘with a big pinny over it for when I’m cooking’.

Michael, 69, meanwhile, might wear something a little more avant-garde. In the past, to entertain the children, he has appeared in an inflatable sumo wrestler fancy dress outfit and as Santa.

There’ll also be church, a bracing walk with the dogs, presents, a champagne and smoked salmon lunch, more presents followed by dinner and games — sardines, charades and maybe even a spot of Strictly Christmas on telly.

It’s all light years from the Christmases of not so yesteryear. Carole — whose father Ron was a painter and decorator and her mother, Dorothy, the granddaughter of a miner — spent her first six months in a council flat in Ealing. She says she was always driven and, keen to get on, took a job with the Prudential aged 16, but loathed it, returning to school where she gained four A-levels.

After John Lewis, she worked briefly as a secretary before becoming an air hostess, which she says was different back then.

‘You had to speak another language. It was almost like being at university!’ (She speaks French). It was there that she met Michael — a manager for an international air station and she organised their wedding, right down to the chilli con carne and bonfire in the evening.

Next came a brief stint in Jordan, where they embraced the social scene at the British Embassy before returning to the UK and the semi in Bradfield where, aged 32 and pregnant with baby James, she set up Party Pieces.

‘It was a good idea or it wouldn’t have taken off,’ she says. And it did, like a rocket. From the wooden shed near the Wendy house in their back garden to a huge business operating from an impressive complex of Dutch barns in Berkshire.

Carole, meanwhile, never took her foot off the accelerator. She worked and provided a loving home — complete with white rabbit marshmallow birthday cakes. In July 2013, she and Mike moved into Bucklebury Manor, a £4.7 million pile with vast grounds.

While Carole might be partial to the odd Christmas tree or ten, she insists she is neither profligate nor wasteful when it comes to clothes. She considers Jigsaw ‘a bit pricey’, visits Catherine Walker for special occasions, but generally prefers to shop in the sales. 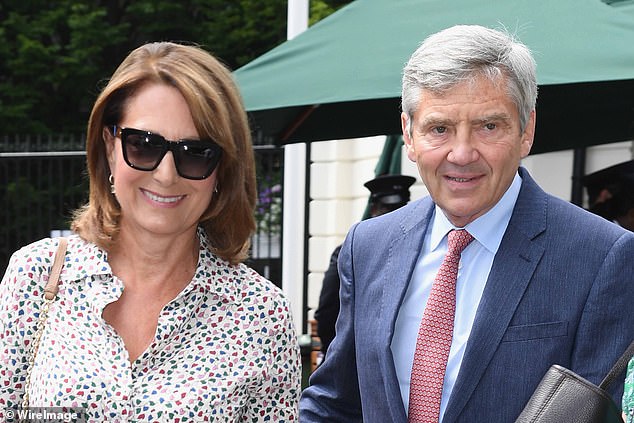 We do now know a lot more about Party Pieces (the multimillion pound business Carole set up in 1987 and runs with her husband Michael, pictured with him above, selling over 7,000 products ranging from hen party tiaras to inflatable dinosaurs

Of course she does! She’s not just granny to the future king, she’s an astute and hard-working businesswoman and self-made multi-millionaire in case we hadn’t realised.

For so long, Carole and Michael have played everything so stylishly, with such dignity — who can forget those unkind ‘doors to manual’ gags when Kate and Wills first got together? No wonder she says she stopped reading anything online about herself.

They provided William with the warm family life he never had. In return they’ve been welcomed into the Royal Family like no other in-laws before, and are incredibly hands-on grandparents to George, Charlotte and Louis.

Quite right, too, as Carole sounds like the world’s best granny. Not just because she looks about 50 and has more energy than most 20 year olds — but because she’s fun.

All children should eat with the grown-ups ‘as soon as they can sit up straight’, she says. She loves a party and confides: ‘I’m definitely a night owl and a real chatterbox.’

Which brings us back to this interview with The Telegraph. She would not have needed permission but it is highly likely that she ran it past William’s staff anyway.

But it still begs the question as to why, after all this time, she chose to do it — it’s not as if her business needs a boost.

In her first magazine shoot, perched on a beige sofa, she looks stylish but awkward — by all accounts she was very nervous, worried that talk of all those Christmas trees made it sound ‘as if I live in a mansion’ and insisted, several times, that her life ‘is really normal — most of the time’.

As Carole puts it herself: ‘Over the years, it’s proved wise not to say anything.’

And, maybe, just maybe, she should have stuck to it.