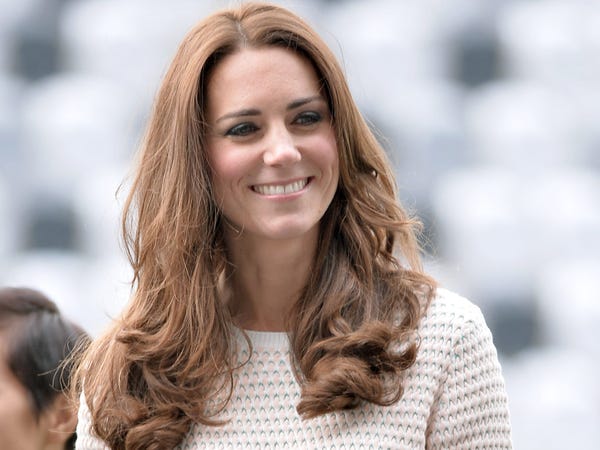 Kate Middleton might have just paid homage to her late mother-in-law, Princess Diana, with her latest outfit.

On Wednesday, the Duke and Duchess of Cambridge met with Ukraine's President Volodymyr Zelensky and his wife, First Lady Оlena Zelenska. For the occasion, Middleton wore a simple, blue dress with a belt around her midriff. A representative from Kensington Palace confirmed to Insider that it was an Alexander McQueen dress.

She completed the look with Gianvito Rossi suede heels and sapphire jewelry that matched her engagement ring.

Eagle-eyed fans believe the necklace Middleton was wearing was actually made from a pair of earrings that previously belonged to Princess Diana. The earrings were a wedding gift from the Crown Prince Fahd of Saudi Arabia.

Kate's Closet, a blog dedicated to identifying clothing items worn by the duchess, gave fans a closer look at Middleton's necklace next to Princess Diana's earrings.

"A closer look at Kate's new sapphire and diamond pendant necklace," Kate's Closet wrote in a tweet shared on Wednesday. "@allthingsroyal suggests the stones may originate from Princess Diana's Saudi sapphire suite. It seems the drop earrings from the parure were used to create the pendant."

A representative from Kensington Palace told Insider they would not be providing specific details on the Duchess of Cambridge's jewelry.

This wouldn't be the first time that Middleton has worn Princess Diana's jewelry, though. At the 2019 BAFTAs in London, Middleton wore the same diamond and South Sea pearl earrings that the late Princess used to wear frequently.

The Duchess of Cambridge has also worn Princess Diana's Lover's Knot tiara on multiple occasions, including to an evening reception held at Buckingham Palace in December of 2019.