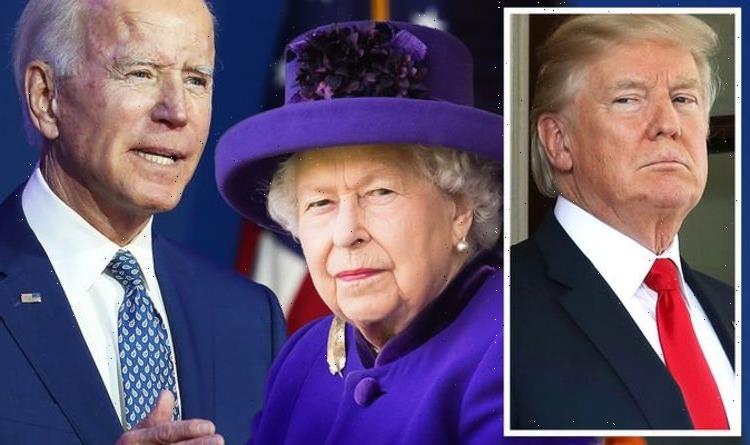 Queen Elizabeth II, 95, has been on the throne for 69 years and carried out hundreds of diplomatic engagements. The Queen’s is a skilled stateswoman and displays tact when meeting public figures. A body language expert has analysed photos of the Queen with current US President Joe Biden and compared them to those of her with former President Donald Trump.

Body language analyst and author Judi James told Express.co.uk: “There are very little variations in the Queen’s body language signals when she is greeting and hosting presidents and Heads of State although subtler cues suggest there might have been a warmer and more affectionate relationship with the Obamas.”

The Queen seems to have been keen to put the Bidens at ease during their visit to Windsor Castle for tea on Sunday, Judi claimed.

She said: “With Biden, her signals suggest a desire to put the rather frail and anxious-looking president at his ease as, despite him being twenty years younger and despite his claim that she reminded him of his mother, the Queen’s body language suggested she could have had the edge when it came to stamina and resilience.”

During her meetings with Mr Trump, the Queen appears to have been “fascinated” to meet a “divisive President”, the analyst claimed. 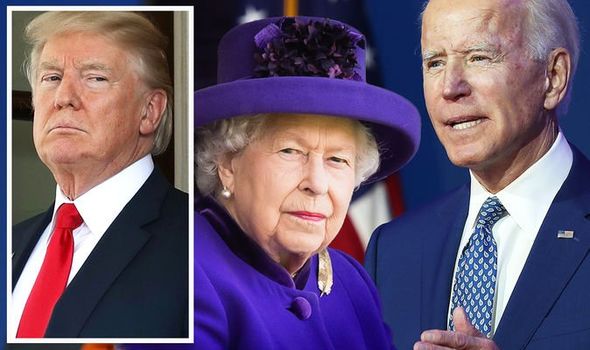 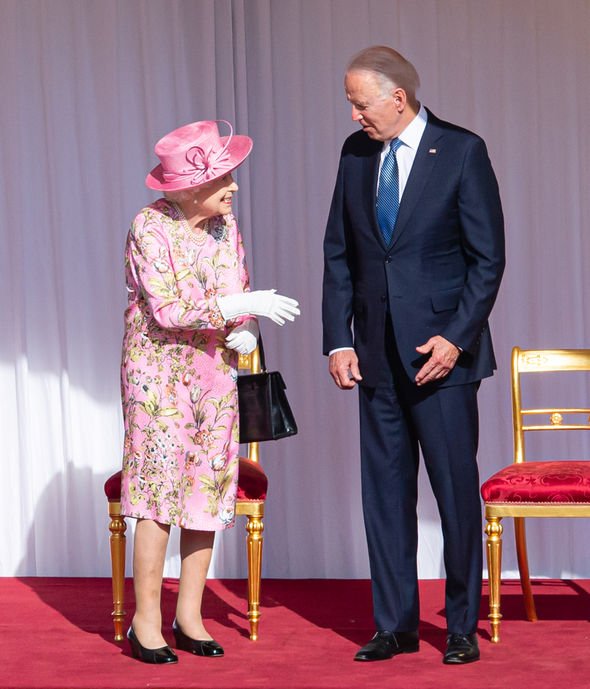 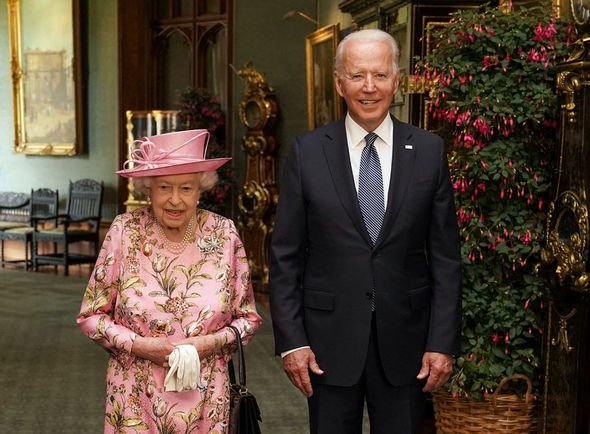 “Trump was a strong and often divisive President with a rather individual approach to meetings of world leaders but this might have been a bit of a stand-out event for a woman who has met a dozen presidents during her reign.”

Judi analysed a series of photos of the Queen with Mr Biden and with Mr Trump and shared her insights. 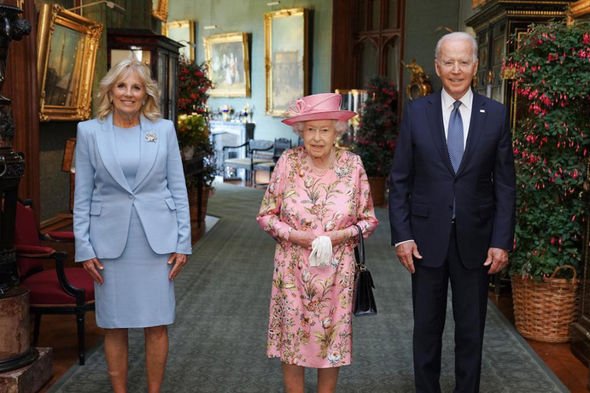 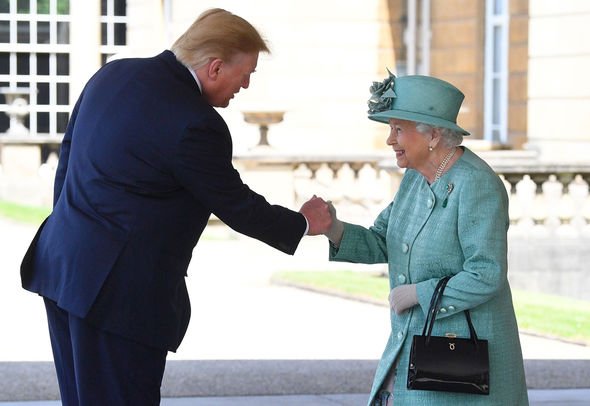 The Queen seems to “steer” Biden during their encounter at Windsor, Judi claimed.

She said: “The Queen’s wide smile and eye contact plus her raised hand suggest she is in reassurance mode here, hosting the slightly awkward-looking President and using a steering hand to ensure he knows where to move to next.

Judi said: “The Queen is always impeccably polite but her smile here does seem to look a little clenched while her hands are clasped in front of her torso in a barrier gesture, holding onto her gloves.

“In the second photo, she is looking down and away rather than looking animated and engaged.”

Judi claimed the Queen’s facial expressions while meeting Mr Trump suggest she found him ‘anything but dull.’

The expert said: “This is a partial barrier involving one arm that is crooked to hold her bag.

“The Queen appears to be biting or pulling in her lower lip, suggesting this controversial president is anything but dull.”

Trump’s “novel-way” of handshaking appears to have delighted the Queen in one picture, Judi claimed.

She said: “Even Trump’s handshake was a little different. Here he has adhered to the ‘fingertips only’ style of royal handshake but also curled his fingers round to create more of a clench.

“The Queen’s facial expression suggests she is delighted with this novel approach though. Her brows are raised, she is using intense and alert eye contact and an excited-looking eye smile.” 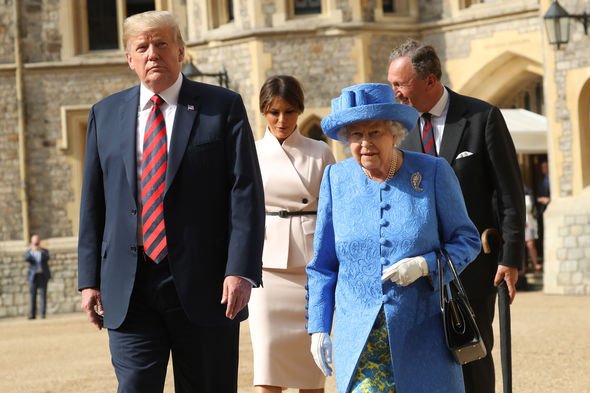 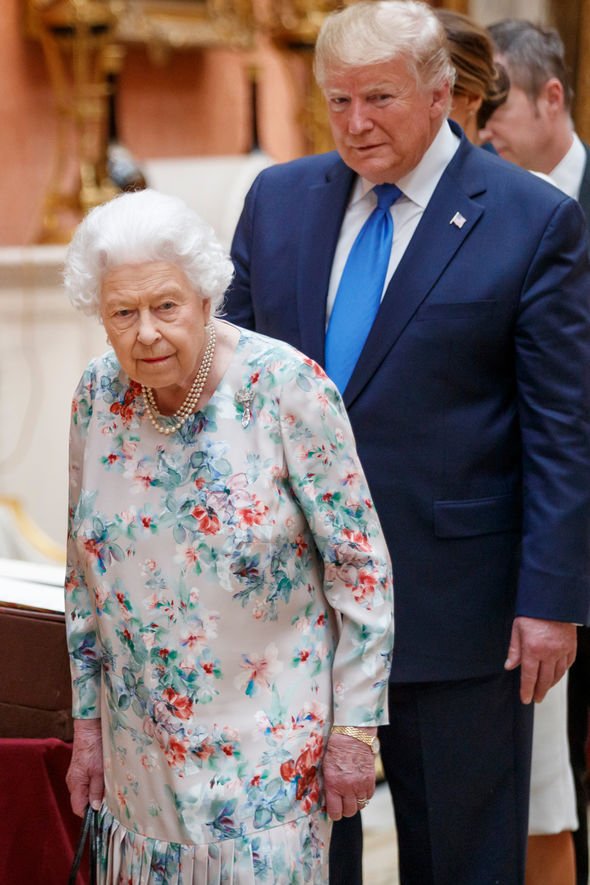 The Queen appeared unfazed as Mr Trump broke protocol by walking ahead of her during one of their encounters, Judi claimed.

The expert said: “The Queen’s lips are sucked in again with Trump as she walks ahead, possibly keeping in mind the moment when she was forced to dodge from side to side behind him to get ahead.

“Like her response when Michelle Obama placed an affectionate arm around her back though, the Queen looked reasonably relaxed about a less rigidly formal approach.”