‘I just gave them a knee in the groin’: Joan Collins insists actresses did NOT have to put up with sexual harassment – and blasts #MeToo stars for not not caring about abused women in refuges

Hollywood legend Joan Collins has opened up about her reservations about the #MeToo movement, insisting women could have done more to stand up for themselves.

The former Dynasty star says she would never have gone to a producer’s hotel room, and would have taken swift action if anyone did try to harass her.

She told the Observer: ‘It seems to me actresses who are saying, you know, “I went up to this producer and he took his d*** out and I froze”. I mean, I’m sorry, you don’t freeze you go, “I’m leaving”.

‘I just gave them a knee in the groin. It’s hardly suffering. You just didn’t put up with it.’

She added that her daughter Tara worked in women’s refuges for three years, and was left in tears when one victim went back to her abuser and was murdered by him.

‘Everybody’s very adamant and strong and #MeToo here in Hollywood, but I don’t see them opening refuges for women who have been abused,’ she said. 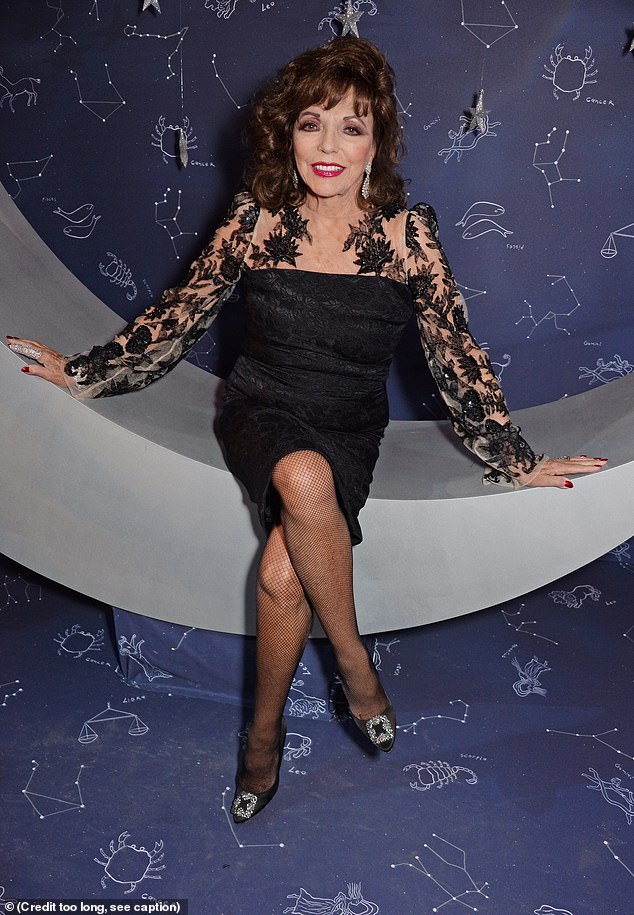 Joan Collins, 85, has shared her mixed feelings about the #MeToo movement, insisting that women in Hollywood didn’t have to put up with harassment from men 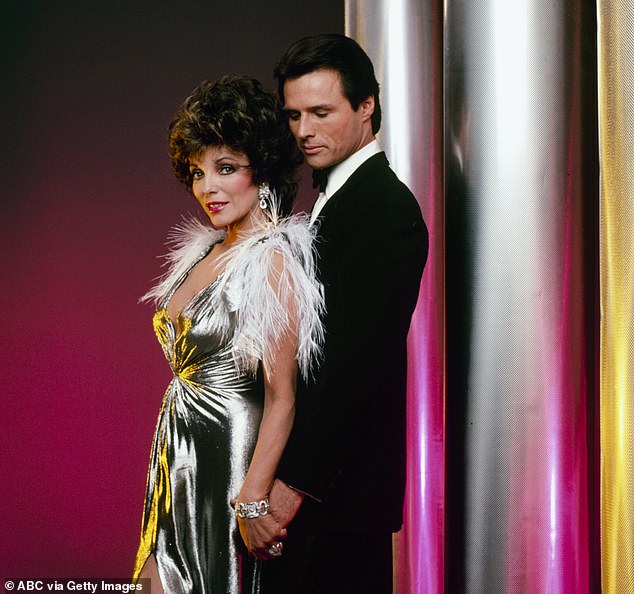 The former Dynasty star, pictured with co-star Michael Nader, said that if anyone had tried to sexually harass her she would have given them a ‘knee in the groin’

The British acting legend, who is appearing in American Horror Story, added that she’s been speaking up for women for 40 years, after she was drugged and raped by actor Maxwell Reed.

He later became her first husband, and she later explained: ‘I only married him because I was so embarrassed that he had taken my virginity.’

She’s now happily married to her fifth husband Percy Gibson, 53, who she wed in 2002.

Collins was 18 when she met the Hollywood heart-throb, who was then 32.

Joan Collins with her first husband the actor Maxwell Reed, who she married in 1952 despite the fact he drugged and raped her on their first date. She later said she only wed him because she was so ashamed that he’d taken her virginity at the age of 18

As an aspiring starlet herself, she was thrilled when Reed asked her out — but her joy would quickly turn to horror when he raped her on their first date.

‘He took me to a place called the Country Club in Hanover Square. We walked up lots of stairs to a small, candle-lit apartment where he asked me what I wanted to drink and gave me a rum and Coke.

‘It was a Mickey Finn. I was drugged. He said: “I am going to have a bath,” which I thought was very strange.

‘He then said: “Take a look at this book, I think you will find it interesting.” 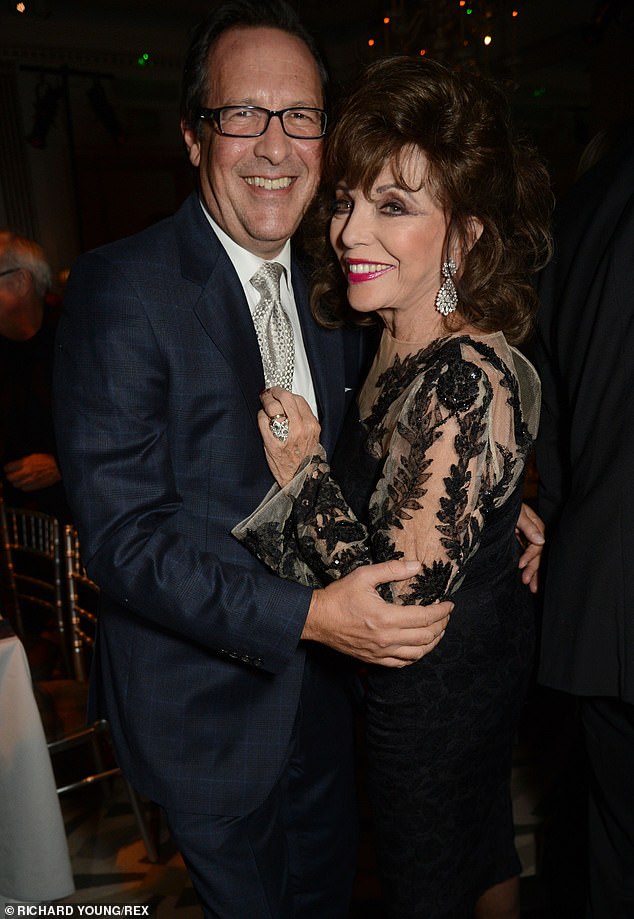 Joan is now happily married to her fifth husband Percy Gibson, 53, who she wed in 2002. Pictured: The couple at Claridge’s Christmas tree party in London in November 2018

‘Of course, it was full of disgusting, pornographic photographs. Now, any smart girl today would have got out of there and run down those stairs faster than a speeding bullet, but not little innocent, stupid Joan Collins, who stayed there and looked at the book.

‘The next thing I knew, I was on the sofa and that was it. Then I was throwing up into a bucket.’

She also previously revealed that she was ‘harassed’ by two megastars, and asked to pull down her top at an audition. 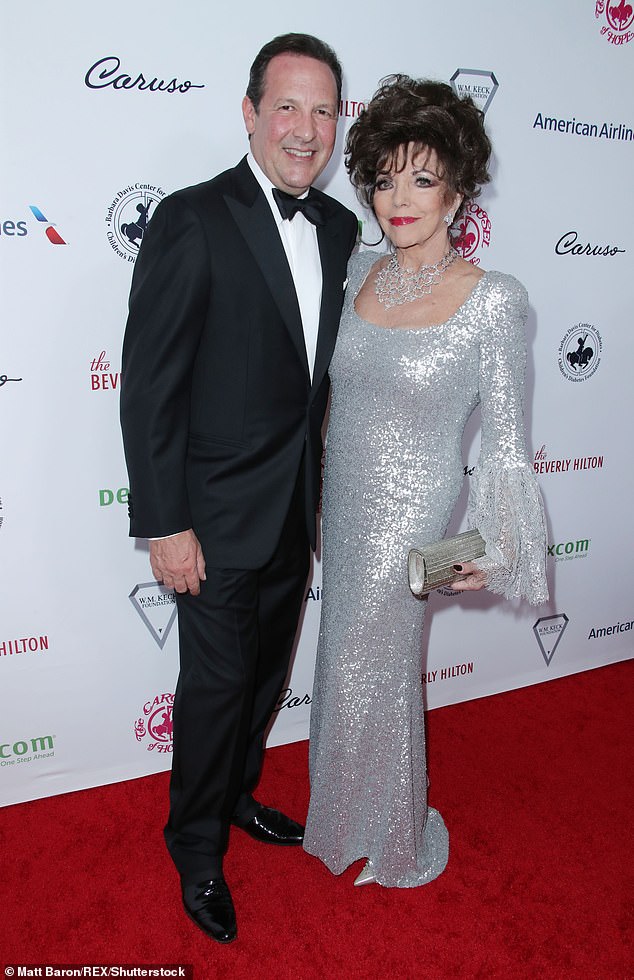 Joan, pictured at the Carousel of Hope Ball in LA in October 2018, said that women in Hollywood who support the #MeToo movement should do more about vulnerable women in refuges

Detailing a number of cases, which even saw her lose out on roles if she refused advances, Joan revealed she would hate her grandchildren to follow in her career footsteps, and go through the same experience.

While she explained she had always firmly batted away any advances, Joan admitted she had been warned about the ‘bad men’ of the industry by her father Joseph.

She said during appearance on This Morning: ‘One of the reasons my father – a theatrical agent – didn’t want me to go into the business, is because he warned me about bad men.