JAN MOIR: Crumbs! How did they make such a meal of the humble snack that got posh?

Scotch eggs are not the kind of edible to hog the limelight. Despite their reputation as a lunch-box staple and perhaps the ultimate bar snack, they are not pushy.

They don’t clamour for attention like a glazed chipolata on a stick (get her!) or a Cornish pasty with its great, show-off ruff of crimped pastry.

Scotch eggs are quiet and workmanlike; the yeoman guard of the hot buffet.

One of the reasons I love Scotch eggs is because they understand their limitations, they know their place. Which is right at the heart of British life, where they are loved and loathed in equal measure. 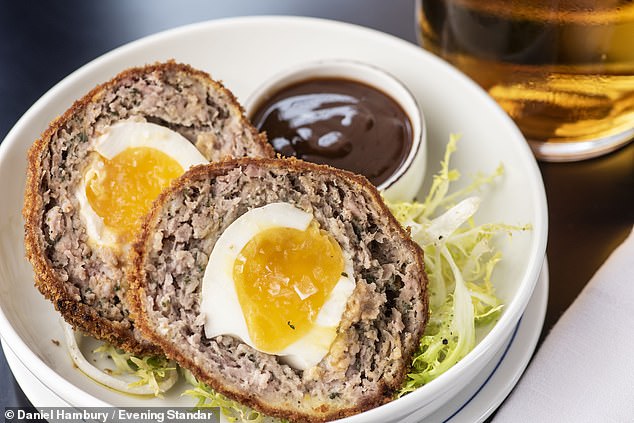 Scotch eggs are not the kind of edible to hog the limelight. Despite their reputation as a lunch-box staple and perhaps the ultimate bar snack, they are not pushy

For it is no secret that over the years the humble Scotch egg has been in and out of foodie fashion like a deep-fried yo-yo; sometimes much mocked, often royally adored.

They have been held up as national treasures and also laughed at as the food of fools.

And now this! How much more can they take? For innocent Scotch eggs have been dragged into the row over the new Covid restrictions, which begin today.

Forget the traditional — try these

And the prize for the strangest variation goes to…

A Smoked scallop and West Country crayfish Scotch egg is served at The Laughing Gravy pub in London (£9.90).

Fortnum & Mason sells a vegetarian version, below. Its ‘vibrant yolk’ is wrapped in a mulch of chickpeas, beetroot and ‘carrot madras,’ then coated with breadcrumbs (£22.95 for six). 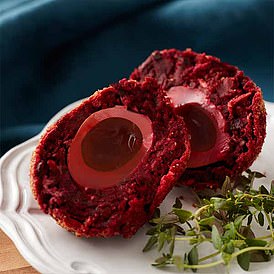 Chef Tim Allen created a £500 Scotch egg in 2012 draped in 24-carat edible gold leaf, wrapped in a ‘puree’ of wild salmon, coated in panko and served with beluga caviar.

Heston Blumenthal served a quail’s egg version at his pub, The Hind’s Head in Bray.

Edinburgh chef Tom Kitchin does haggis Scotch eggs. ‘The Scotch egg has a bad reputation,’ he says. ‘But made fresh, it can be truly delicious.’

Most of the country is locked into Tier Two, with severe limitations imposed on pubs where regulars can only drink alcohol if they have purchased a ‘substantial meal’.

The big question is, does a Scotch egg count as a substantial meal or not? It has become an egg-enigma wrapped in a sausage meat riddle, enrobed in the eternal mystery of highly seasoned breadcrumbs.

On Monday, the answer was yes. And also no. Environment Secretary George Eustice stated boldly that Scotch eggs counted as a substantial meal, absolutely, pass me the mustard, yum yum.

(Of course he would say that, considering his family farm in Cornwall reportedly sells Scotch eggs, along with sausage rolls and quiches.)

Then No 10 wasn’t quite so sure this was indeed the case. No, hang on. By Tuesday Michael Gove had decreed that Scotch eggs are indeed a ‘substantial meal’ and can be served with alcohol.

There was great rejoicing across the land, but one wonders where the indecision comes from. I mean, come on. A whole egg, boiled and then peeled before being encased in minced pork, dredged in breadcrumbs and deep-fried?

If that is not substantial, then what is? It is not a prawn or a handful of Bombay Mix or whisper it, an upstart pork pie. Sometimes you have to wonder about ministers’ grasp on reality, on everything from pub snacks to public health.

Previously, Communities Secretary Robert Jenrick had even suggested that a Cornish pasty would also count as a proper meal, but only if plated — dread word! — and served with chips and salad.

But who eats Cornish pasties like that? Like Scotch eggs they were made to be horsed down standing up, with a pint of ale in one hand, a joke on your lips and crumbs all over your Argyle tank top.

Or eaten straight from the paper bag by the seaside, while duelling with a beady-eyed seagull.

How did we get there? Despite the fact that they are deep-fried, Scotch eggs have nothing to do with Scotland.

In fact I would go so far as to say that they are not nearly so popular nor commonplace north of the border as they are down south. We’ve got our Scotch mutton pies after all, and on this issue we shall not be moved.

Fortnum & Mason claim to have invented Scotch eggs in 1738, in the days of horse-drawn travel when hardy, portable snacks were needed for toffs making the long journey home from London to their country estates.

I like to think that at a time when Handel was still writing his operas and cobalt was being discovered in laboratories, some bloke in Piccadilly was saying: ‘Ye knoweth what would be right tasty wrapped around ye boiled egge? Ye mince of sow and herbes!’

A Fortnum’s historian has pointed out that the eggs would have been smaller in those days; pullet rather than hens’ eggs. The meat would also have been gamier, a strong and coarse liver pate instead of pork. 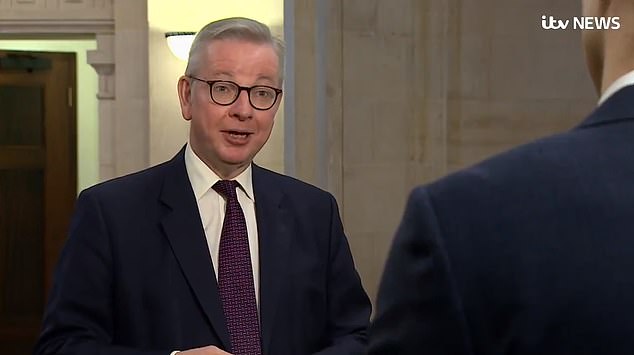 In their own journey into the affections and stomachs of the population, it is interesting that Scotch eggs were the exact reverse of oysters; they started off as a posh snack for the landed gentry, but ended up being as common as muck.

Indeed, by the time the 20th century arrived they were being mass produced in factories to their detriment; grey and compressed coffins of mystery meat encasing a bullet hard egg, its yolk tinged with green.

They were sold in motorway service stations and became a worrisome thing to find on your plate at school dinners. They developed into a national joke because — like birthdays, lovers, holidays and colds — everyone has had a bad one.

By the Nineties the Scotch egg was at such a low cultural ebb it had become Alan Partridge’s comedy snack of choice, even though it gave him egg breath and a gassy stomach.

The Kings Head in Gosfield, Essex, is offering £1.99 plates on a ‘Boris Menu’ such as a hotdog and chips, baked beans on toast with cheese and cheeseburger and chips

In Ricky Gervais’s hit comedy series The Office, a character called Keith often silently demolished one for his lunch. It was not a pretty sight.

Then something incredible happened. Over the following years, Scotch eggs became fashionable.

Gourmet versions started popping up in gastropubs. Waitrose began selling a black pudding version. Celebrity chefs added them to their menus. And food magazine Olive included them in its 2011 list of cool things to eat.

When everyone realised how enjoyable they could be if made carefully and with love, Scotch eggs had come in from the cold, literally.

At the Harwood Arms in London, its venison Scotch egg even reached a kind of cult status. I remember eating one for the first time and being thrilled by its deliciousness — and the egg yolk was still runny! How did they do that?

By plunging the soft-boiled eggs into iced water, and keeping them there after peeling, is the secret.

The joke — or should that be yolk — is that the Government’s dithering has meant that Scotch eggs are now undergoing yet another revival. Their recent exposure in the public eye has already seen a dramatic effect on sales.

According to one pub-food supplier, sales have increased tenfold over the last week. And that is just eggsellent news. Harwood Arms, here I come.