This story originally appeared on espnW.com.

This past August, in Madison, Wisconsin, 17-year-old Haley Adams stepped up to a barbell that weighed more than she did. It was the first day of the CrossFit Games, the sport’s annual competition to find the Fittest on Earth, and already Adams had beaten the 19 other girls in the 16-17 age division in a Marines-style obstacle course and a series of handstand walks.

Now, for the final part of the last event of the day, she had to get that 165-pound barbell from the floor to above her head in one explosive movement — twice.

Not only did Adams snatch the final weight, but she also won the event (which combined with jump-roping) by 34 seconds, a margin of victory that only expanded during the next four days of competition. Of the 11 events in her division, she won nine, took second in the other two, and accrued 1,080 points, more than 200 points higher than the second-place finisher.

“I couldn’t ask for a better performance,” she says. “Everything went perfect.”

It was also the most dominant performance in CrossFit Games history. 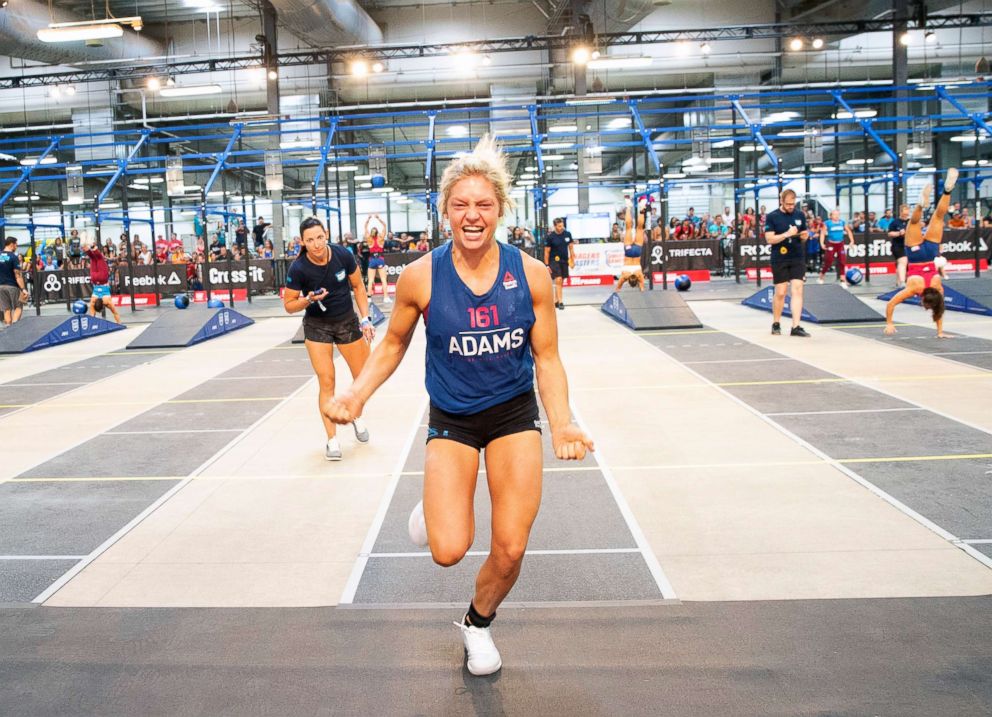 Adams has an advantage over every adult competitor on the floor, though: She’s part of the first generation of CrossFit natives. Founded in 2000, the sport is only a year older than she is, and because competitive CrossFit didn’t start until the creation of the Games in 2007, the adults all came from other disciplines. Mat Fraser, the men’s CrossFit Games champion for the past three years, was on track to become an Olympic weightlifter before an injury derailed him, while Tia-Clair Toomey, the reigning women’s CrossFit champ, was a runner.

And the events in the CrossFit Games require an almost impossibly diverse set of fitness skills. This year, the adults at the Games competed in 14 events, including a 12,000-meter bike race, a marathon-length row on an erg machine, a 500-meter open-water swim — and traditional strength tests such as the max deadlift, squats and shoulder presses. (The teens competed in three fewer events, at slightly lighter weights and a little less volume.)

Because of the huge variety of the events, athletes from other, more specialized sports always come to CrossFit with gaps in their previous training, but Adams has no such gaps. A gymnast since age 10, she transitioned to CrossFit at 14, which allowed her to build a broad foundation of fitness across all of the different potential CrossFit events.

Chris Hinshaw, one of Adams’ coaches and the trainer behind 28 CrossFit Games championships, says that Adams’ well-balanced training background makes it far easier for her to see improvement, and that she can already do training regimens that would challenge even elite CrossFitters. She also has an attitude that can’t be beat.

“She wants to train. She loves working out, and she’s not afraid of hurting,” he says.

As for weaknesses, Hinshaw points to Adams’ pure strength, but even that facet is remarkable. Her combined max deadlift, back squat and shoulder press (the “CrossFit Total”) is 710 pounds — 180 pounds heavier than the best score for an adult woman at that inaugural 2007 Games and enough to place 36th in the adult division this past August.

If Adams hopes to have a decade-long career, though, she’ll need to be careful. “I would really love to work on her pure speed,” Hinshaw says, “but it’s highly risky. I could run her fast, and then she pops a hamstring because she’s still developing. … We’ve seen a lot of athletes where the coach ruins them.”

For now, Hinshaw is encouraging her to maintain her skill sets rather than push her limits too far. For example, to be competitive at the Games level, Adams needs to shave five seconds from her 400-meter time, which, if she were an adult, Hinshaw would accomplish by having her practice sprints at 100 and 200 meters. Instead, she trains sprints and sled pulls at shorter distances in order to improve her starting power and acceleration with a lower risk of injury.

But even with appropriate coaching, it’s still unknown what’s in store for this first generation of CrossFit kids, and it’s impossible to completely lighten the demands that will be placed on Adams’ body.

Consider the case of Angelo Dicicco. He grew up in Cookeville, Tennessee, which has become a training mecca for stars like Fraser, Toomey and CrossFit Mayhem, the team that won the Games in ’15, ’16, and ’18 and is captained by Rich Froning, the four-time Fittest Man on Earth. At the 2017 Games, Dicicco won the boys’ 16-17 age division, and this year, he was set to compete at the Games with Mayhem, only to be diagnosed with degenerative disc disease, a genetic condition that causes the vertebrae in his back to deteriorate. In an interview on the EMOM Podcast, Dicicco says that even though the deterioration likely would’ve happened no matter what, his doctors believe it happened to him so young because of the intensity of his weightlifting. 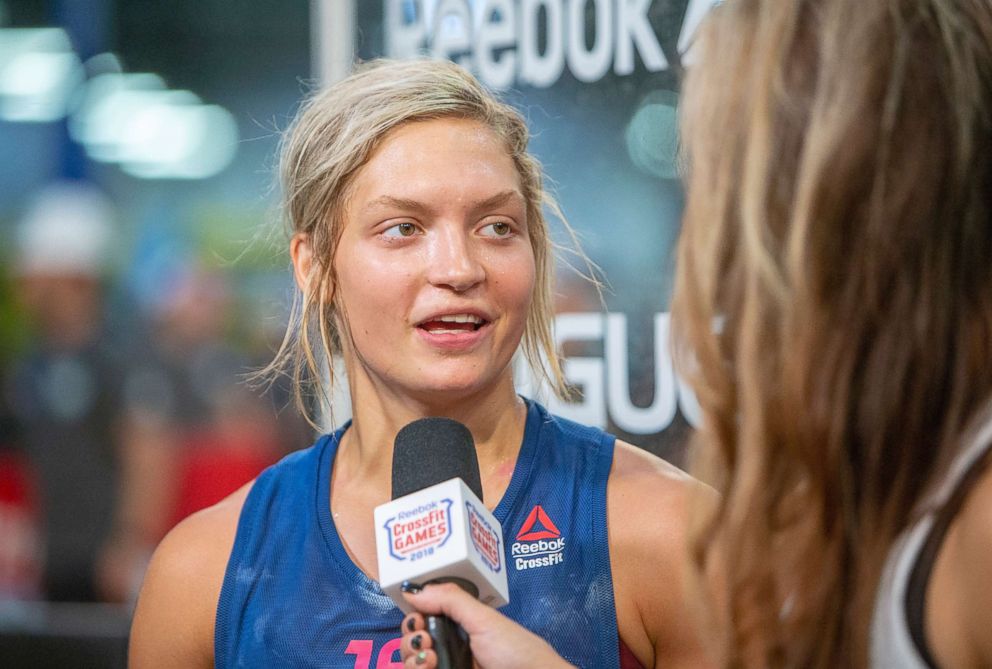 In October, Hinshaw and one of Adams’ other coaches, Heidi McLean, asked her to move from her hometown in Lexington, North Carolina, to train in Cookeville, the first teen to get the prestigious invitation. While there, she asked to attempt something she’d been itching to do since she saw the adults do it at the Games: row a marathon on an erg machine. McLean agreed to row the 26.2 miles alongside her, as long as McLean could split the distance with a friend, and just like that, the trio was off.

Three hours and 15 minutes later, Adams was finished, in an astounding time that would’ve placed her 25th at the Games and was just 15 minutes off the world record for her age bracket. “And that was with no stress and no competitors around her,” McLean says. “She probably could’ve done a lot better if she were on the competition floor.”

During that marathon row, Froning stopped by and complimented her split time, which ultimately sparked Adams on a new trajectory for her CrossFit career: Instead of trying to make it to the Games as an individual next year, she has decided to train with Mayhem full time and hopefully punch her ticket as part of the team.

“Before, I didn’t see myself on a team because I didn’t know who I’d be on a team with,” she says. At Mayhem, she’s found both a team and a community.

“She asked Fraser the other day, ‘What’s a good front squat-back squat training program?'” Hinshaw says, “And Fraser just — boom, gave one off the top of his head. And that’s what you get here — you get access to somebody like Fraser because you’re having dinner with him.”

Such a supportive training environment is also a welcome haven for Adams, who dropped out of public high school after her freshman year, partly because of bullying from boys who would grab her biceps in the hallway and tell her that girls shouldn’t have muscles. “I didn’t want to be around those kids anymore,” she says. “I was just ready to get out of there.”

In Cookeville, she’s finishing her senior year online and hopes to go to college and major in something related to exercise science. She’s currently on Mayhem’s B-team and an alternate for the A-team. Though nothing is guaranteed for the 2019 Games, it’s hard to imagine a Mayhem-affiliated team not making the cut — or Adams not being on the roster.

“Haley has the genetics and the experience,” Hinshaw says. “In addition, she’s created a balanced lifestyle and an impeccable support structure, which have helped her sustain an unrelenting level of motivation and work ethic.”

For her part, Adams is also optimistic. And she has her own prediction for once she gets to compete in the adult division. “In five years,” she says, “I’m going to win the CrossFit Games.”

Disney is the parent company of ESPN and “Good Morning America.”