Inside the most elaborate campervan EVER: Family buy an epic two-storey motor home with 10 beds, four TVs, a shower, toilet and a kitchen that rivals a modern apartment

A specialised vehicle company in Queensland has created what might be the most elaborate camper van of all time.

Designed by Gold Coast manufacturer SLRV for a family looking to explore the outback without relinquishing creature comforts, the ‘Commander’ is a sight to behold.

Typical motorhome fridge and freezer capacities range between 40 and 230 litres.

The diesel-powered caravan has all the features of a modern city apartment, with a fully functional kitchen, shower and toilet, sleek leather lounges and a washing machine hidden behind a panel on the outside wall. 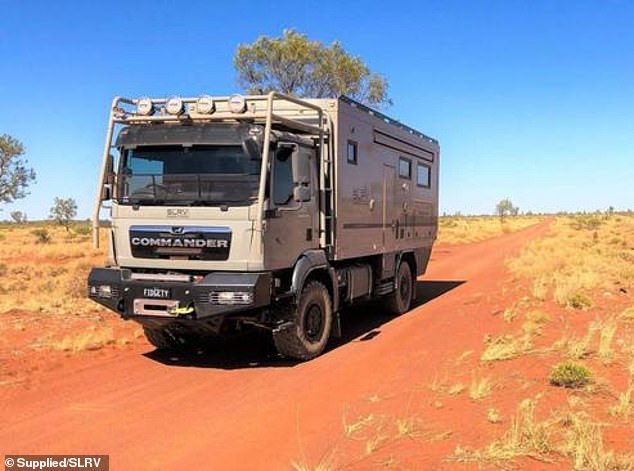 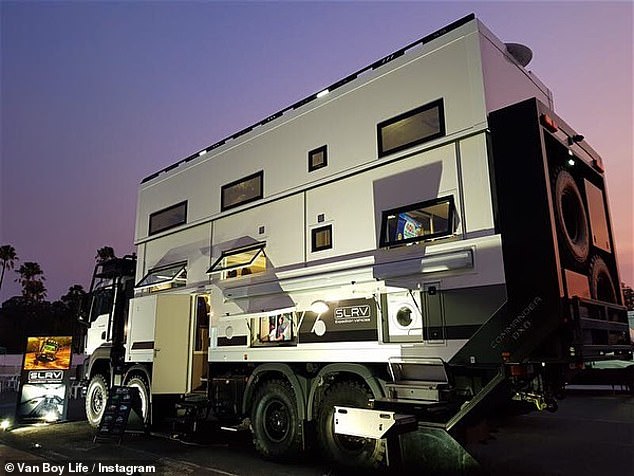 While the cost of the van has not been disclosed, an earlier interview with the NZ Herald estimated the total between $1million and $2.08million.

The average cost of a new motorhome in Australia is $150,000, according to figures from Camplify – but these basic models pale in comparison to the extraordinary features of the Commander.

The carriage is mounted on a MAN TGS, a German-made truck typically used to carry refrigerated containers for medium and long-haul transportation.

Designers chose the MAN TGS truck because of its robust and flexible chassis – the frame covering the wheels – which can withstand enormous pressure, making it ideal for driving in extreme conditions.

Powered by a 353 kilowatt engine, it can be driven in automatic or manual gear mode – essential for driving across rocky terrain.

Diff locks force the wheels to spin in unison, also vital for off-road adventures where trucks can suddenly lose traction.

An aluminium roof rack provides additional storage space over the cab, which also has a side ladder for easy access, spotlights to guide the way in poor visibility and metal sidebars to protect the truck from low-hanging tree branches. 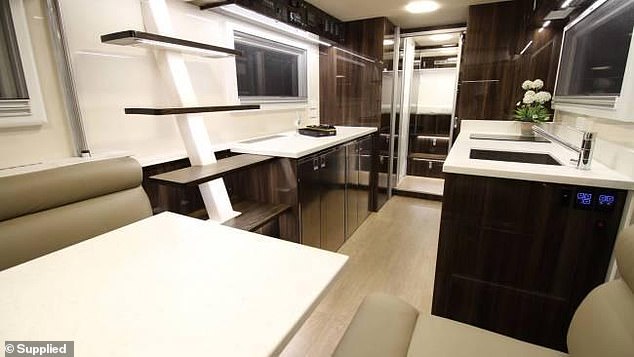 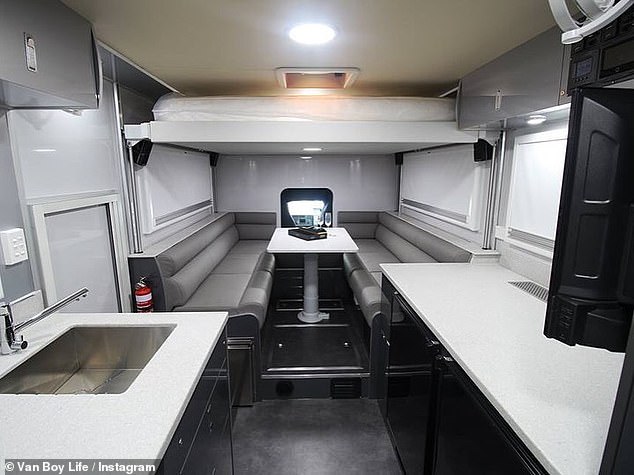 The body of the caravan is made from aluminium, steel and fibreglass panels, cut and folded with a computer numerical control, a machine used to laser cut heavy duty materials.

Every piece is waterproof and fire retardant for safety and durability, whether you’re exploring the rain-soaked countryside of Tasmania or the sun-drenched expanse of the Northern Territory.

Unlike standard campers constructed from hot glued panels, Commander panels are fully infused – which means they are sealed with a vacuum, bolstering the van with ‘ultimate strength’ and insulation.

This extends to the windows, which are double-glazed to protect the interior from the elements all year round.

Fly screens are fitted across the inside, blocking out mosquitoes and other insects found deep in the wilds of the outback. 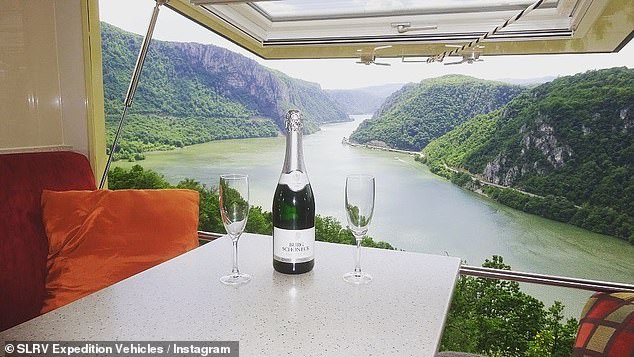 A view from inside the van, which drives easily through dense bushland and along the walls of canyons

Inside, cupboards and storage containers are made from premium plastic with soft-close runners and compression latches which stop drawers from rattling over bumps and potholes.

The van can be fitted with almost any appliance, including induction stovetops, convection ovens and microwaves, diesel-powered water heaters and speaker systems for entertainment.

Buyers can choose from a range of bathroom layouts, all of which include a mirrored vanity, shower and toilet – a rare feature for a motorhome.

An additional fold-out bed can also be installed above the lounge area on request.

Water is stored in multiple tanks, separated by quality which allows you to conserve the precious supply.

A smart system allows you to select which tank you wish to fill by pressing a switch, with options for shower, washing dishes and drinking. 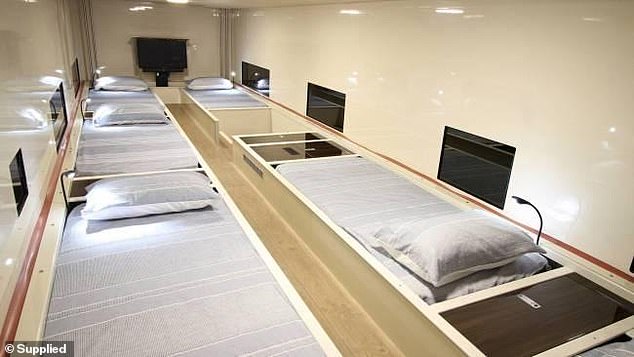 Inside are 10 bunk beds, four televisions and 475 litres of freezer space

Depending on single or two-storey configuration, the Commander can hold between 500 and 1,000 litres of water at a time – perfect for long-term travel across remote regions.

There’s also a ‘city water’ accessory that allows you to connect directly to mains water supply, bypassing tanks when you stop in urban areas.

A back-up fuel tank with 1,000-litre capacity is fitted in the truck for emergencies.

Unlike mass-produced caravan hatches, the panel on the exterior wall that covers the washing machine is dust and waterproof and does not degrade in the sun.

Powered by five separate electric systems and back-up alternators connected to a main circuit breaker in the truck, the lights stay on no matter how far you travel. 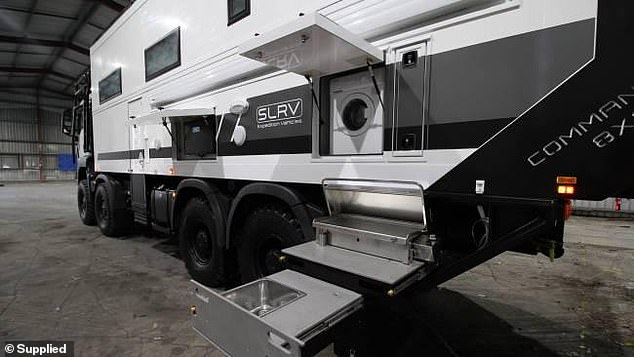 Unlike mass-produced caravan hatches, the panel on the exterior wall which covers the washing machine is dust and waterproof and does not degrade in the sun

The Commander can be made in single or double storey configurations, with options for custom interiors to suit travellers’ specific needs on request from SLRV.

The family who commissioned the original model in late 2019 started touring the Sunshine State in their ‘apocalypse-grade’ vehicle before the coronavirus crisis began in March.

Demand for camper vans and off-road vehicles has soared since the pandemic slammed shut Australia’s international and interstate borders, which have only started to reopen in recent weeks.

Online searches for motorhome and camper van holidays soared after the first coronavirus lockdown, as thousands of Australians looked to the roads for escape.

Trailer Camper Australia director Peter Dimmock noted a ’30 to 40 percent’ increase in footfall between May and June, the Canberra Times reported.

ARB, Australia’s largest manufacturer and supplier of four-wheel drive accessories, saw record sales in June and July after restrictions relaxed across the country, according to Sky News. 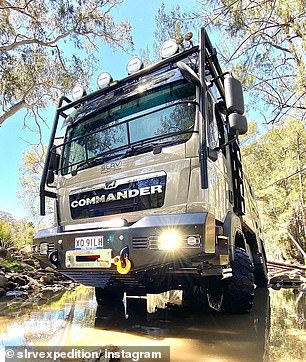 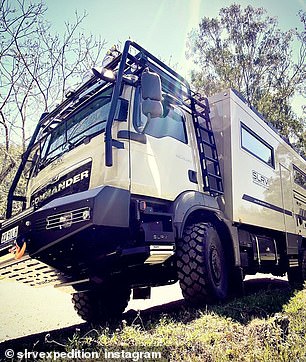 ‘We have had continued demand for our larger vehicles as they present a luxurious option to tour the country with all the comforts of home – especially in times where overseas travel is not possible,’ Ms Boswerger said.

As of June, the owners were still exploring the outback, waiting for state governments to relax their COVID-19 restrictions so they can travel further afield.