Belles of Le Bal! Inside the exclusive Parisian soiree where the debutante daughters of Jet Li, Julio Iglesias, and Tamara Mellon made glittering society debuts in couture gowns and dazzling diamonds

Society darlings — including daughters of the rich, famous, and royal — came out in their fanciest gowns and priciest borrowed jewels for the 2019 Bal des Débutantes in Paris last weekend.

The event, which was held at the ritzy Shangri-La Hotel in the 16th arrondissement, is in his 26th year, and is known to have some well-known names on the guest list.

This year, Jet Li’s daughter Jane Li, Jimmy Choo cofounder Tamara Mellon’s daughter Araminta Mellon, and Julio Iglesias’ daughters Cristina and Victoria Iglesias were among the debutantes to get all dolled up, dance, and socialize on November 30. 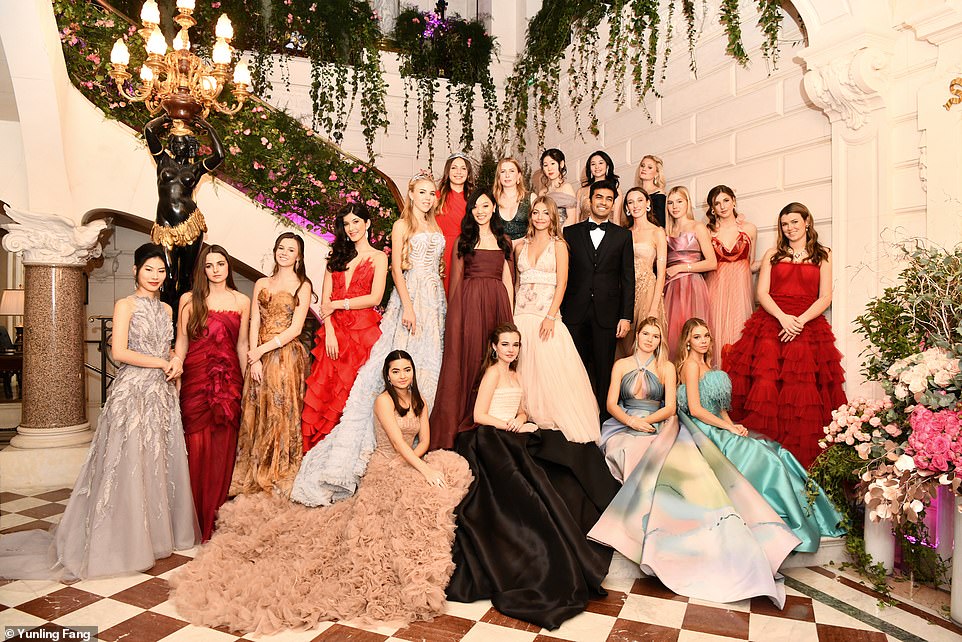 High society: The 26th annual Bal des Débutantes was held at the Shangri-La Hotel in Paris on November 30, and was attended by a number of young socialites from well-to-do families around the world 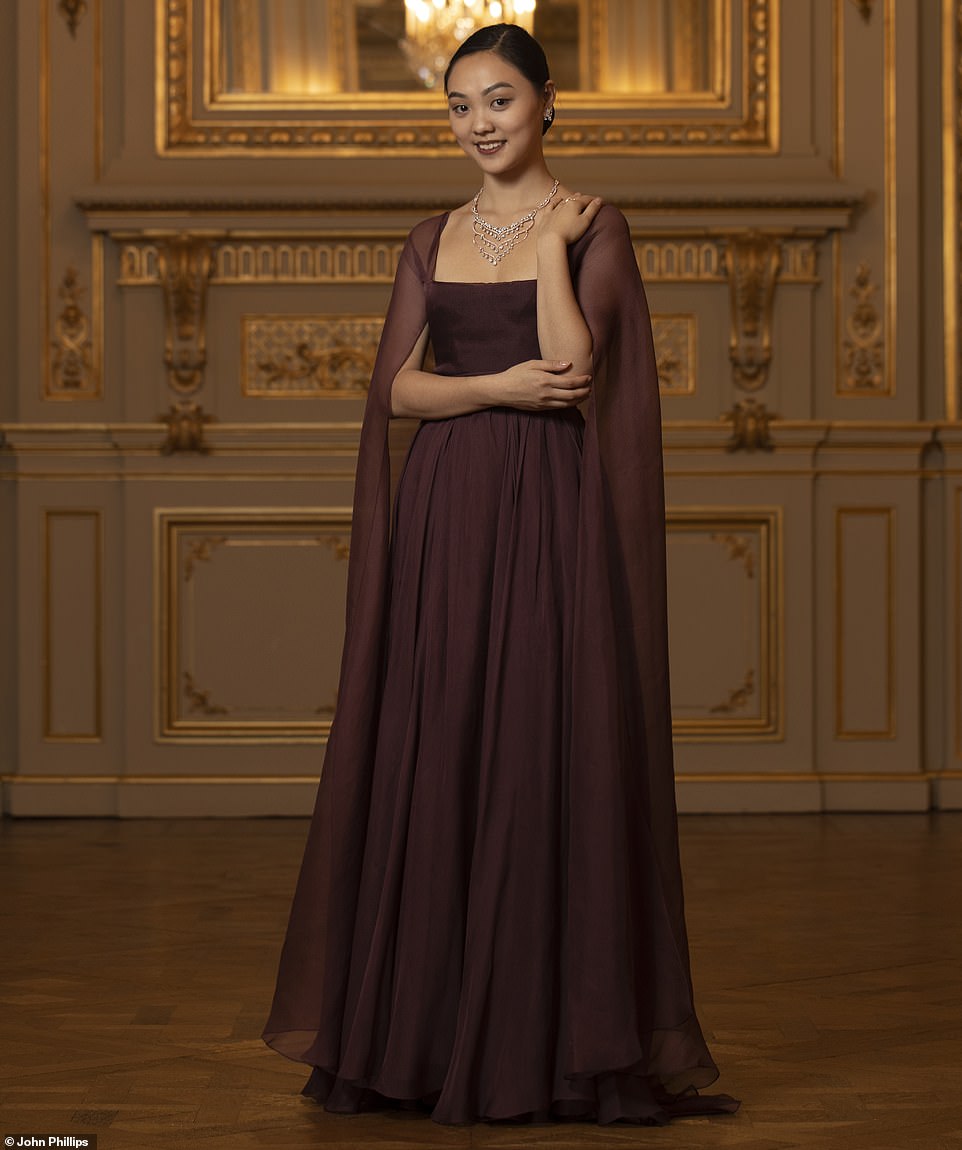 Famous offspring: Among the debutantes was Jane Li, the daughter of film star Jet Li, who wore a beautiful burgundy gown for the soiree, which she attended with both of her parents 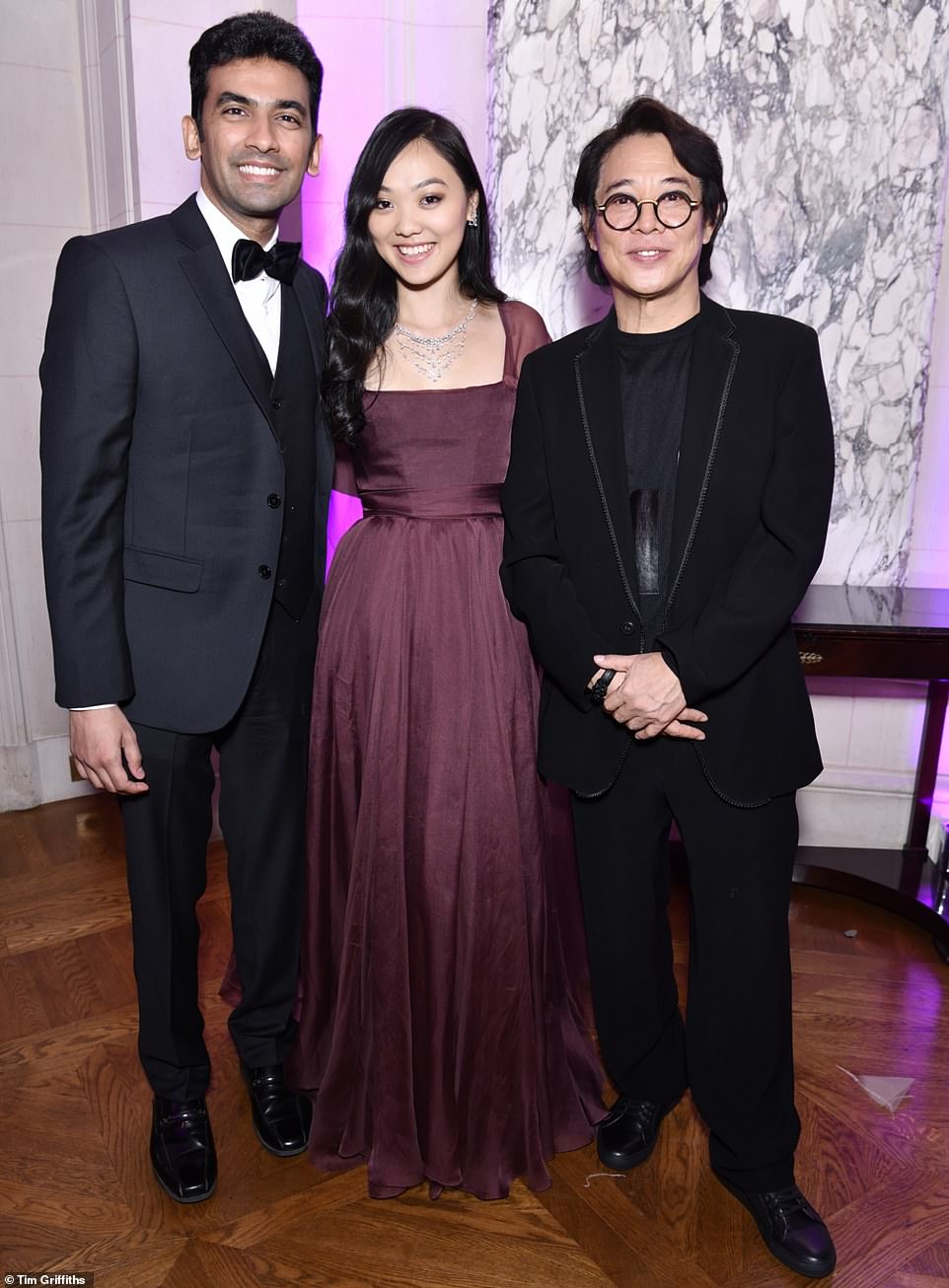 Posing for pictures: Jane, a 19-year-old sophomore at Harvard University, poses with her dad (right) and jeweler Harakh Mehta (left), who provided dazzling diamonds for the young women to wear with their couture gowns 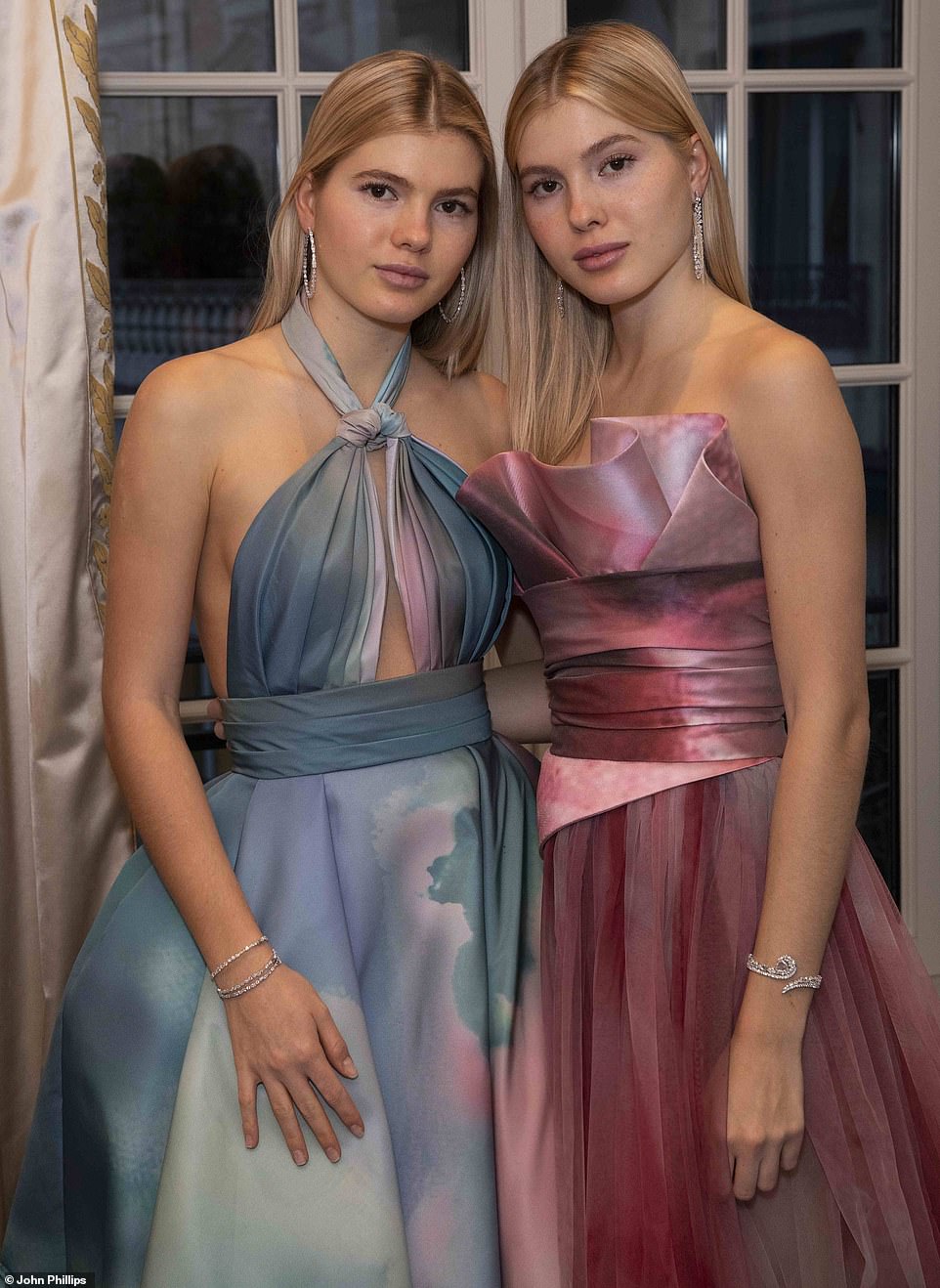 Thanks dad: Julio Iglesias’ daughters Cristina and Victoria Iglesias were also among the debs, and each wore a gorgeous watercolor gown by Elie Saab Haute Couture 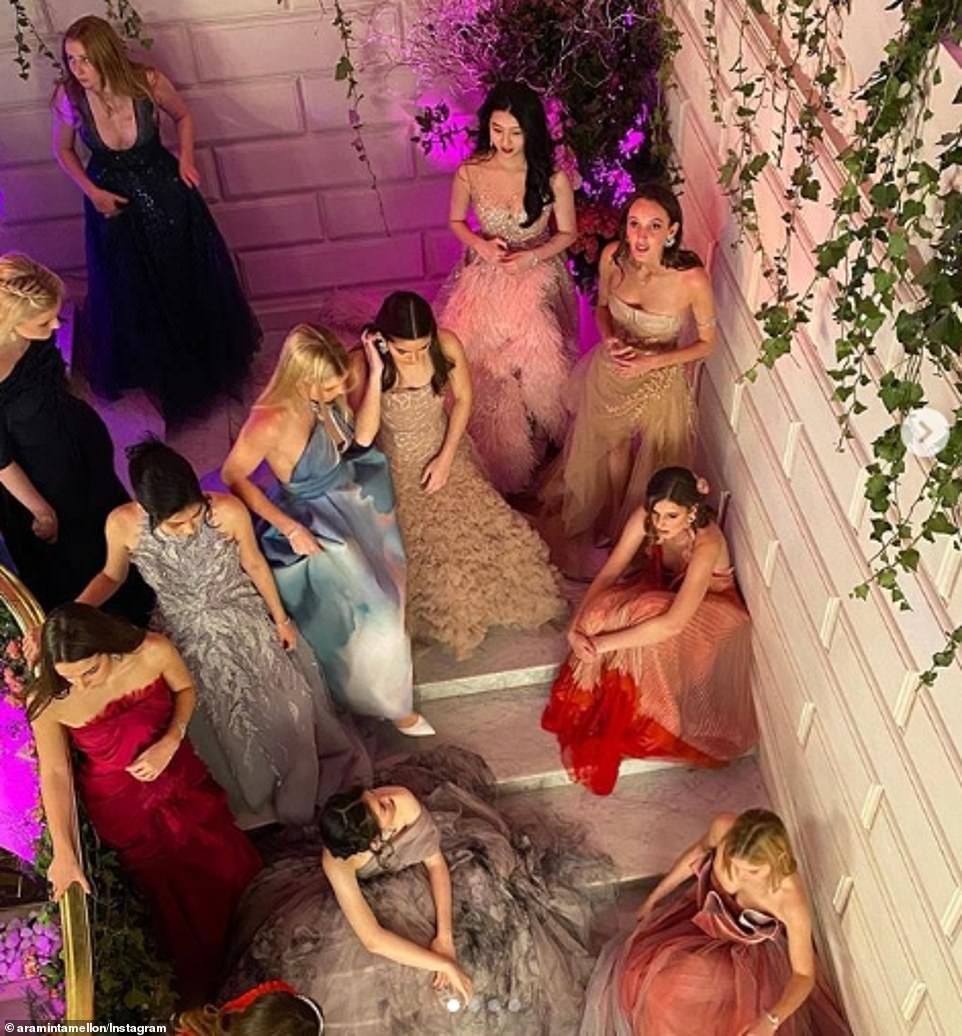 Ladies: The ball is organized every year by French publicist Ophelie Renouard, and celebrated its 26th year with 2019’s event. Last year the soiree was attended by Forest Whitaker’s daughter True, and HH Princess Ananya Raje Scindia of Gwalior 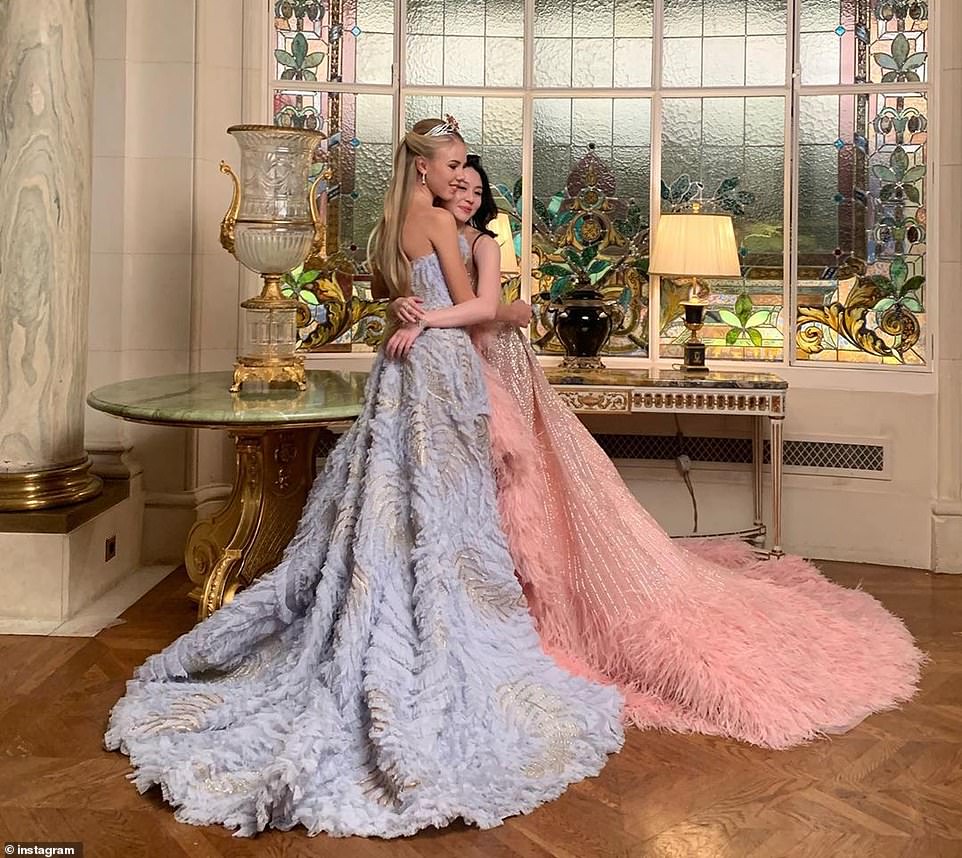 The ball is organized every year by French publicist Ophelie Renouard, who dreamed up the fete in the early 90s.

‘The original idea for the first debutante balls was to bring together young people from the same social background so they could get married,’ she told WWD.

Debutantes typically come with their parents, and are escorted by high society young men, who are called ‘cavaliers.’

Supported by private sponsors, the ball raises money for two charities: the Seleni Institute, which supports teen mothers’ reproductive and mental health, and Enfants d’Asie, which promotes the education of girls in Southeast Asia.

But while it certainly helps some worthy causes, it’s ultimately a chance for young, monied women to dress up in fancy ball gowns and parade in front of the cameras with their well-bred escorts.

A sophomore at Harvard University, Jane wore a stunning blush Dior gown for a pre-party photoshoot, and a maroon gown for the big night.

She was escorted by cavalier H.R.H. Prince Alexander d’Arenberg.

‘I first heard of Le Bal via my cousins on my dad’s side who had all done it,’ she told WWD. ‘My uncle wanted me to carry on the tradition. It was fun because I got to see all the old photos and their dresses.’ 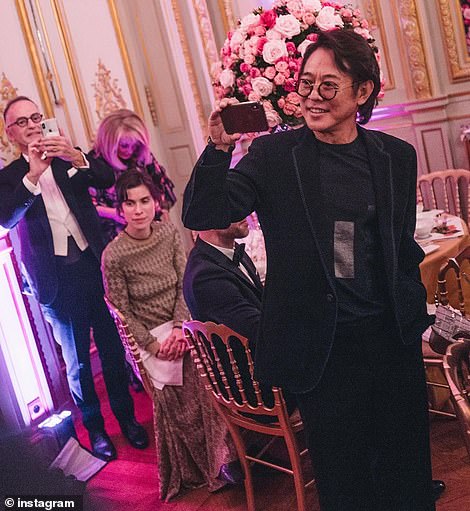 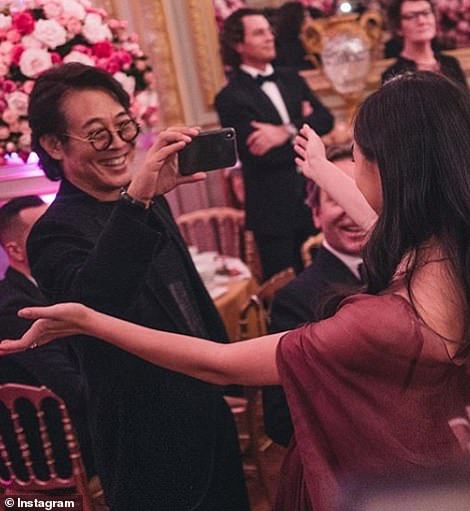 Proud dad: Jet Li looks on and snaps photos as his daughter enters the room, then goes for a hug 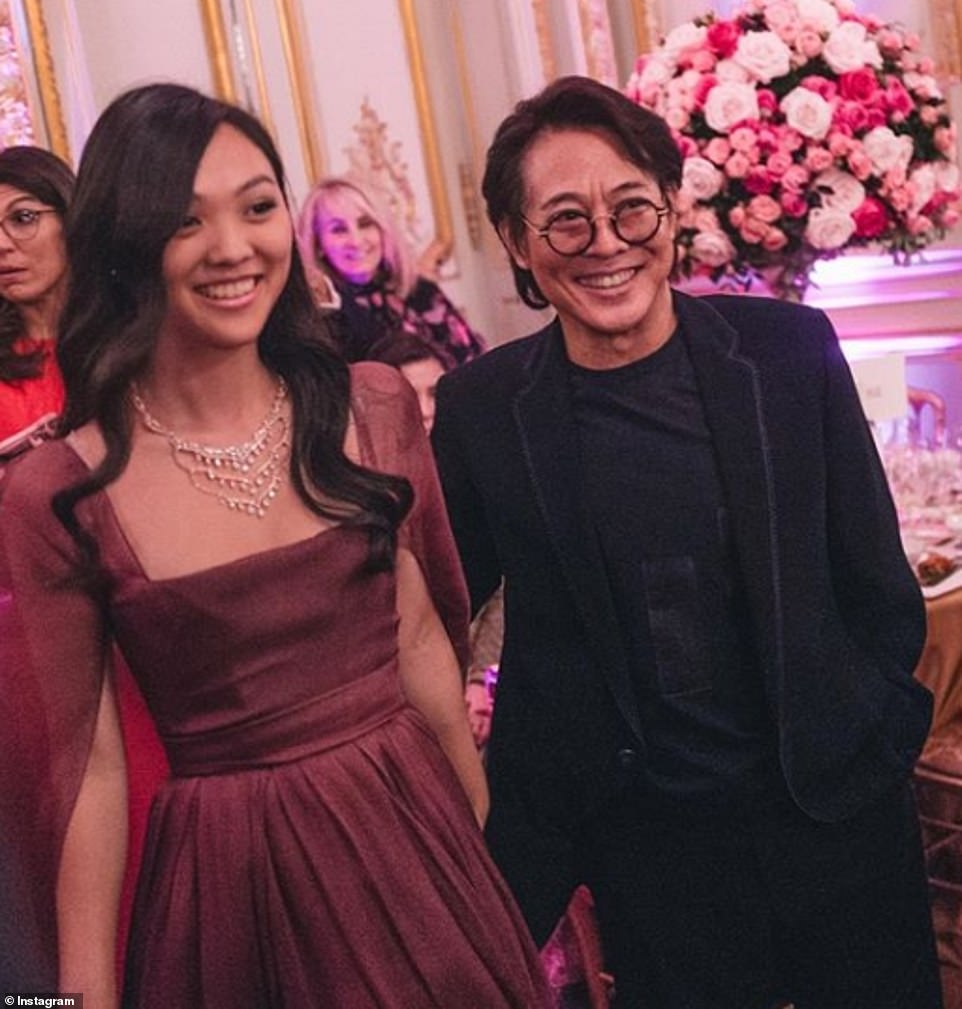 A special moment: The two posed for a few photos together after her entrance 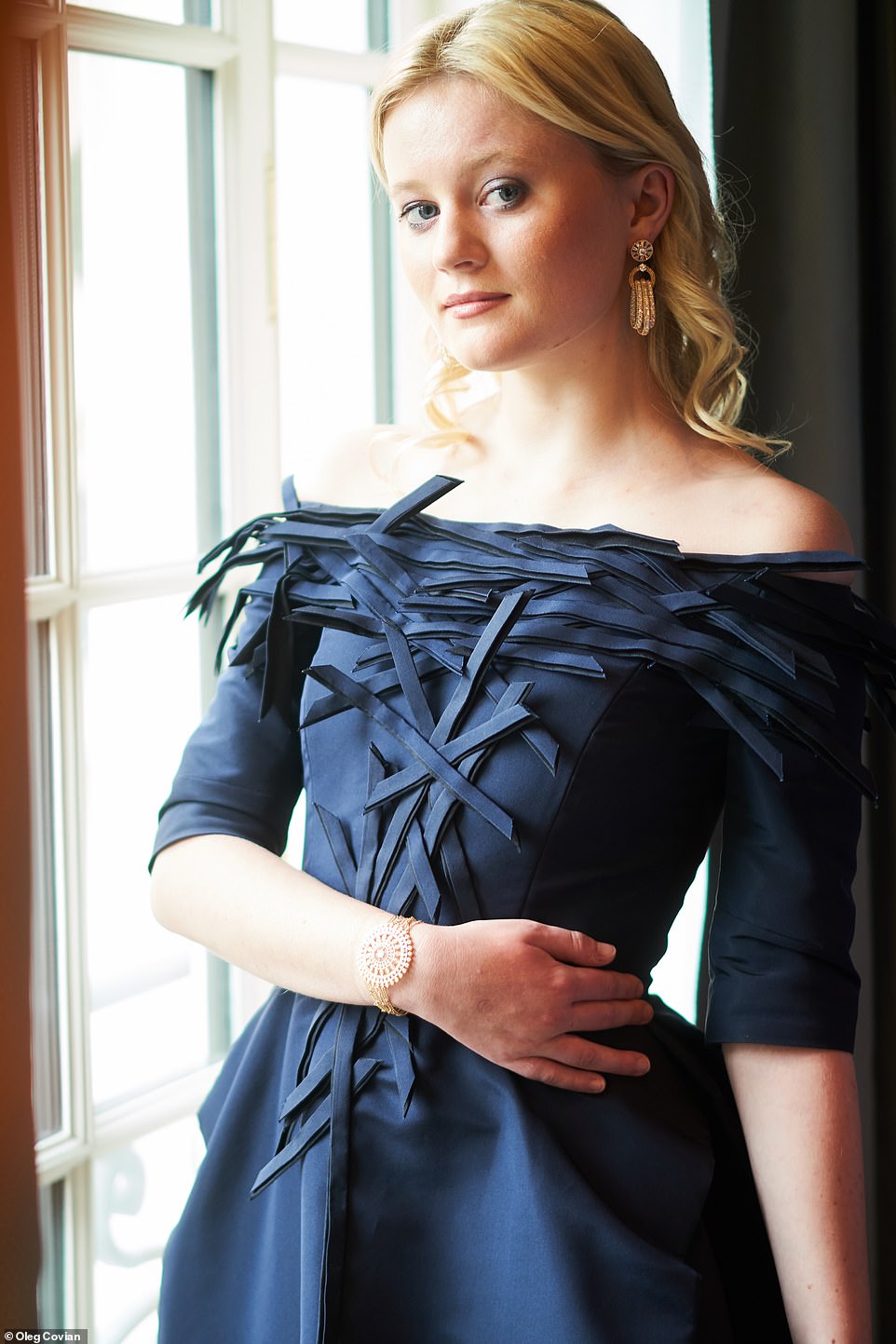 Glitz: Harakh provided a whopping $10 million worth of jewelry for the debutantes, including Josie Yates, whose father is a director and film producer 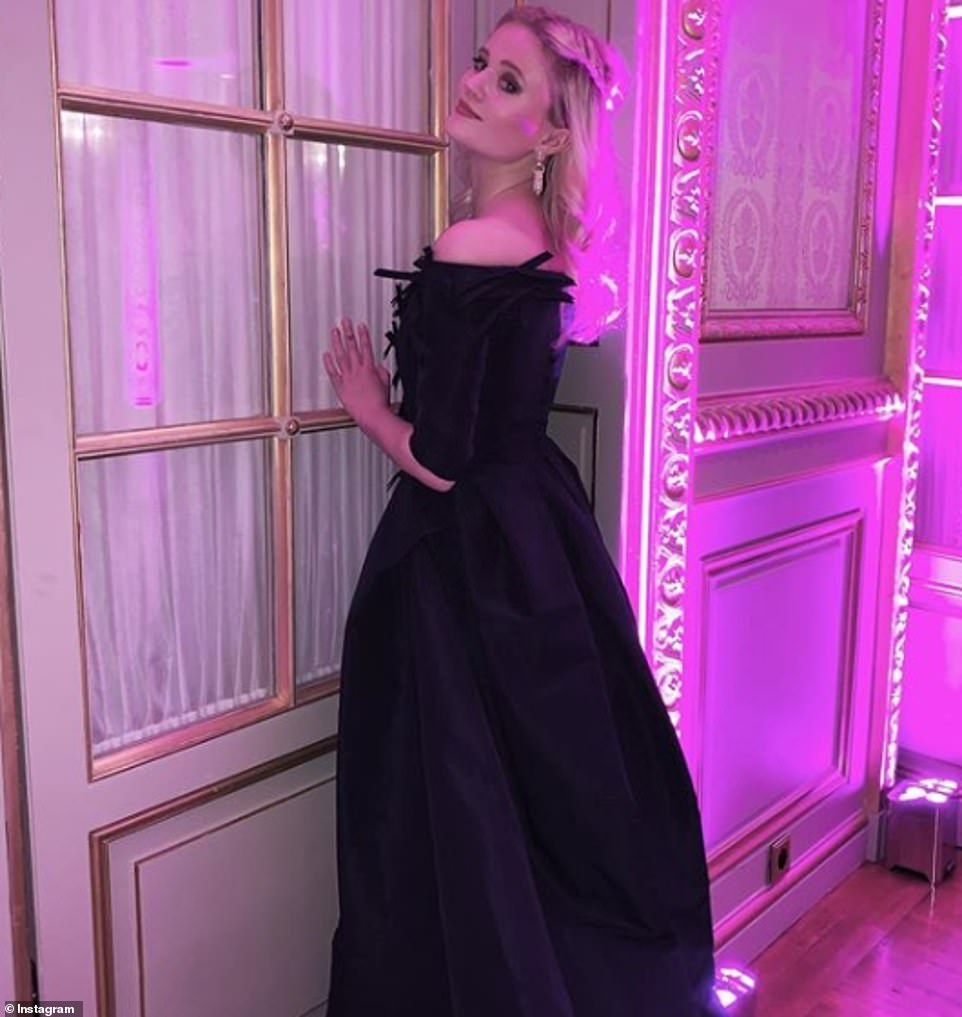 Strike a pose! Josie poses in a low-light area during the party 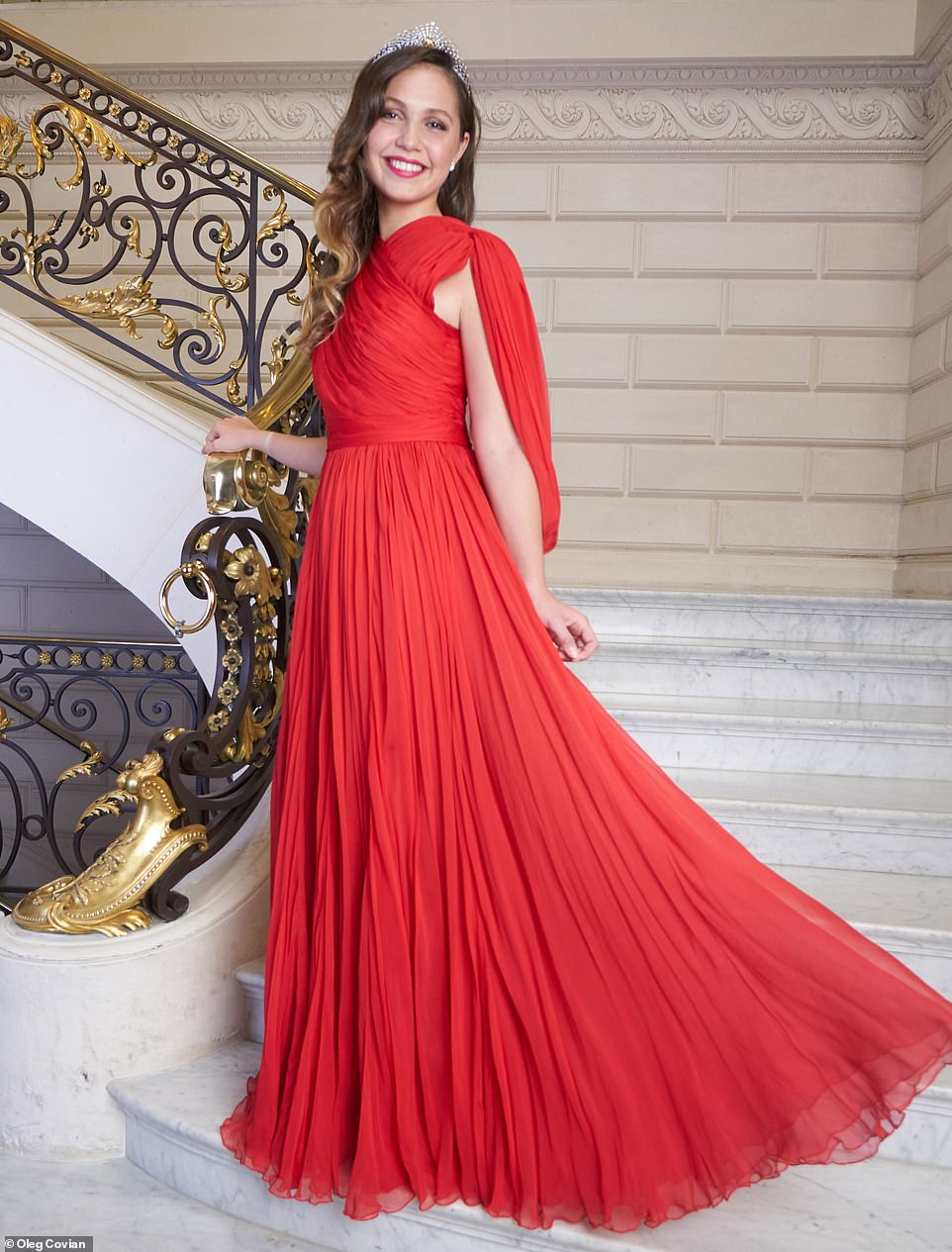 Besides donning dresses by top couture designers, the young ladies all get the privileged of borrowing pricey jewels for the night. 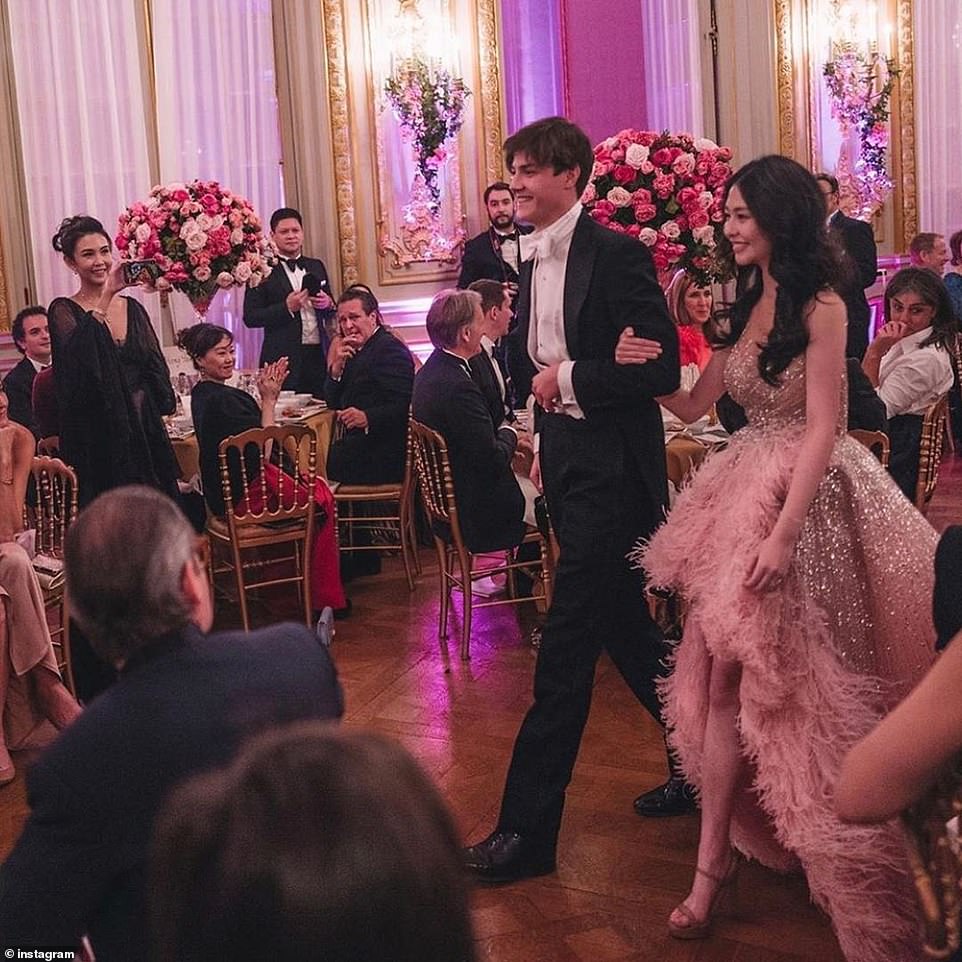 Got a hot date? Shum Yuet showed off some leg thanks to the high front hem of her feathered gown as she walked in with her cavalier while the guests clapped and snapped photos 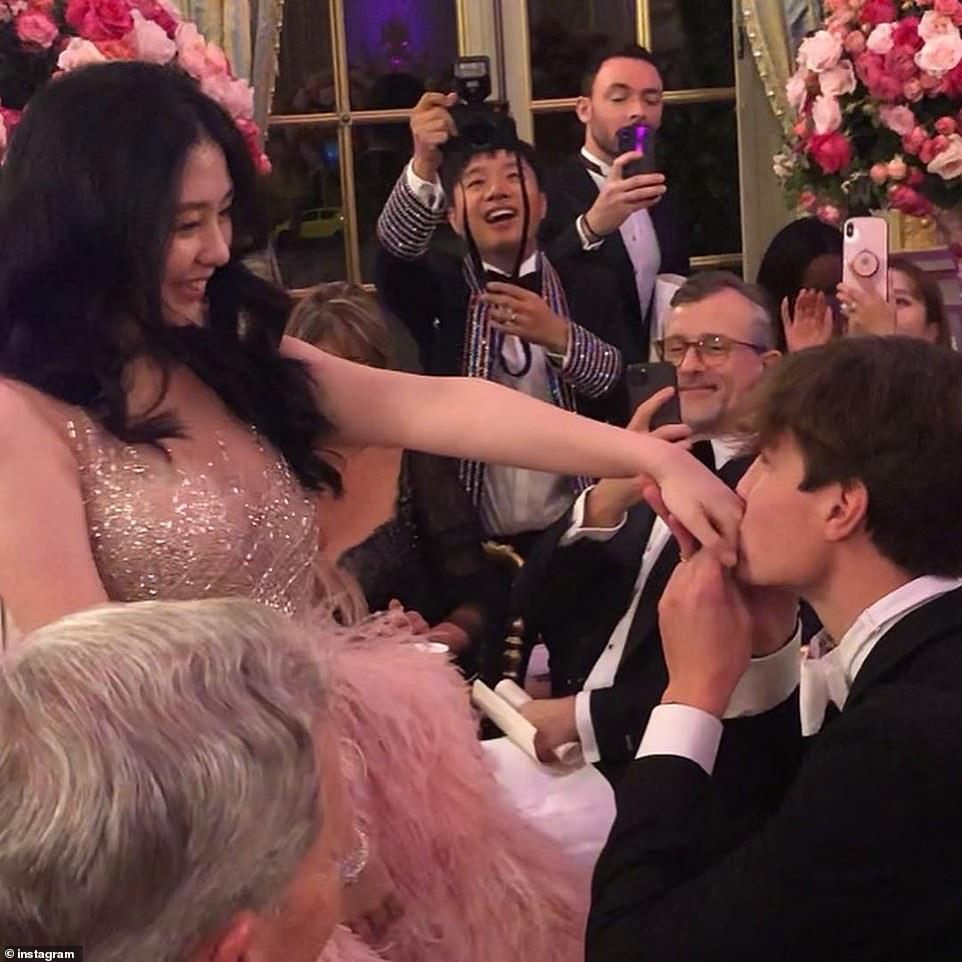 Manners: Shum Yuet gets a kiss on her hand from her cavalier 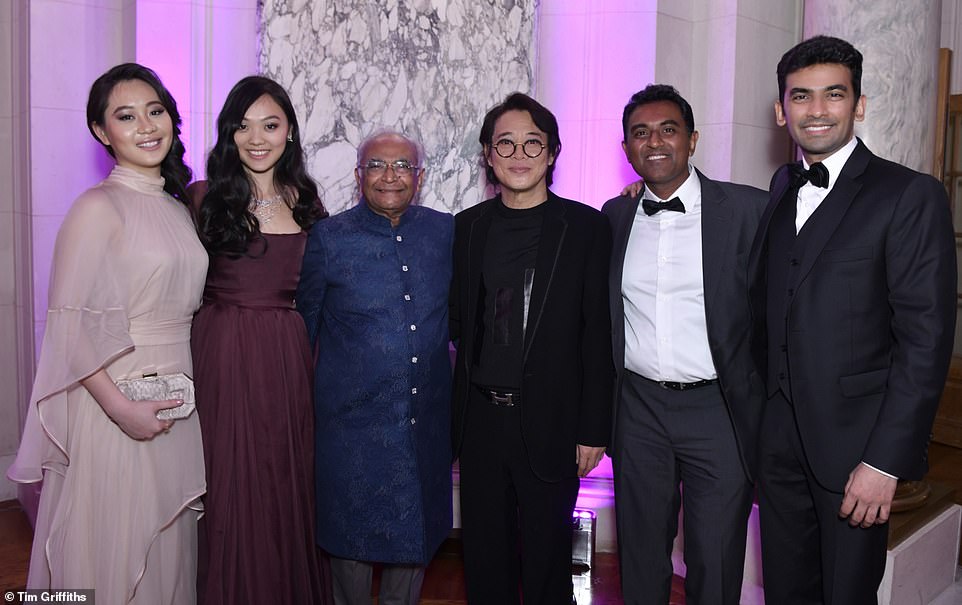 This year, the official jeweler of le Bal was Harakh. Founder Harakh Mehta provided a whopping $10 million worth of jewelry for the event.

He custom-designed several pieces for Jane Li, including a necklace, earrings, and a ring featuring the designer’s  ‘drop of joy’ motif.

‘Harakh Mehta has a profound understanding of jewelry and its space,’ Jane said in a statement.

‘Working with him to create custom jewelry for le Bal was a dream — each piece was so intricately and thoughtfully crafted. I am very touched by Harak’s ability to bring my stories to life and combine meaning with generations of craftsmanship. 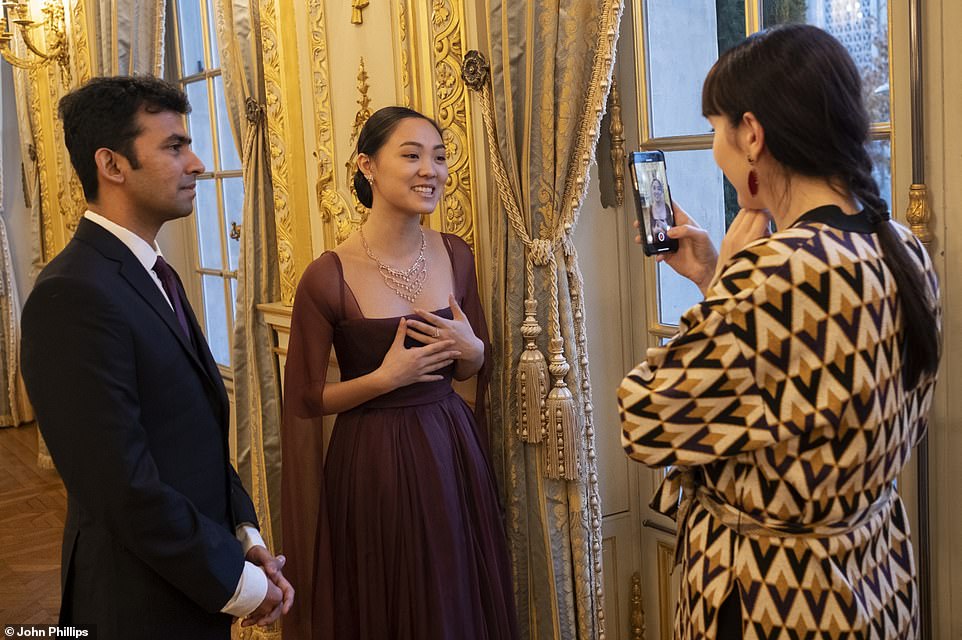 Some sparkle: Jane Li poses in her custom-designed necklace, earrings, and ring 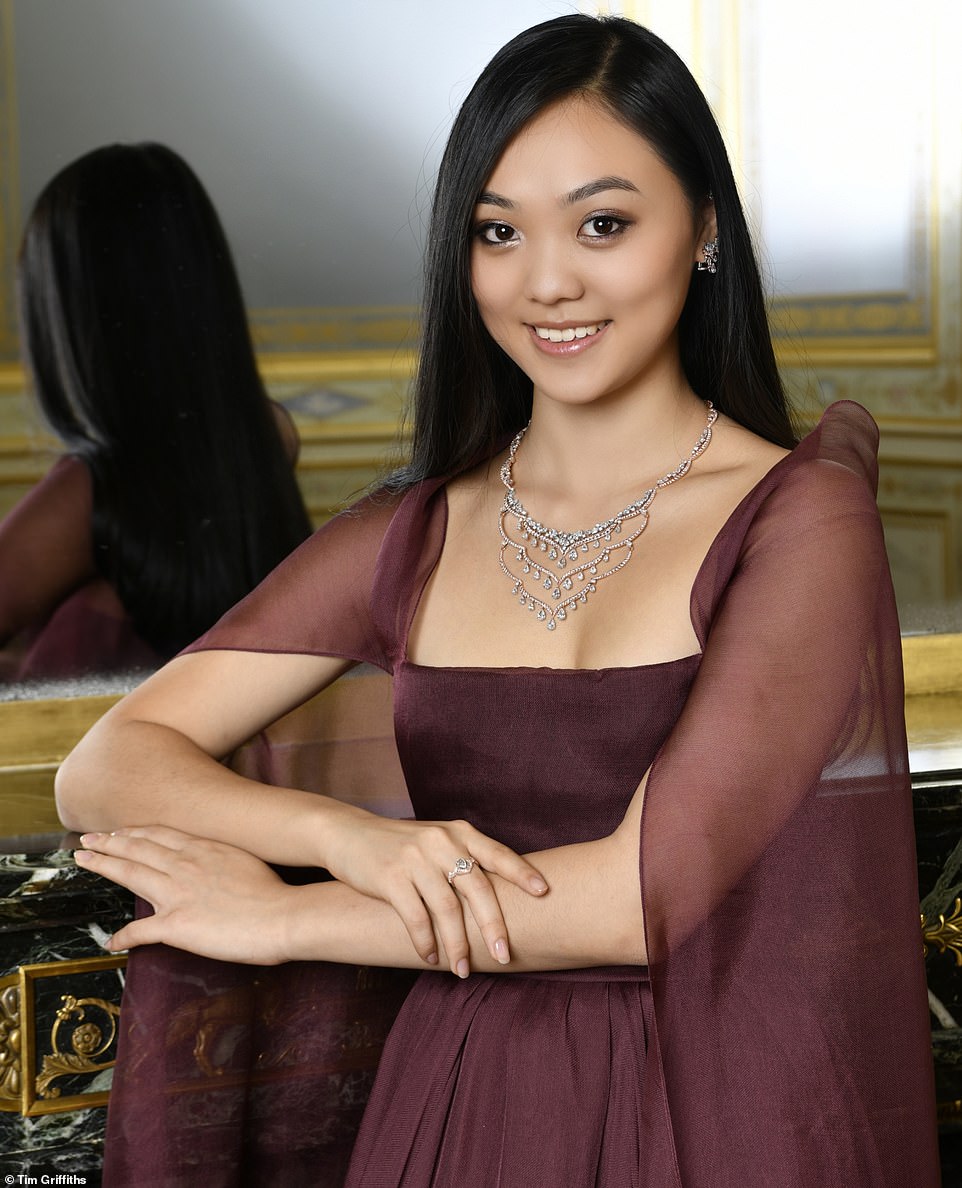 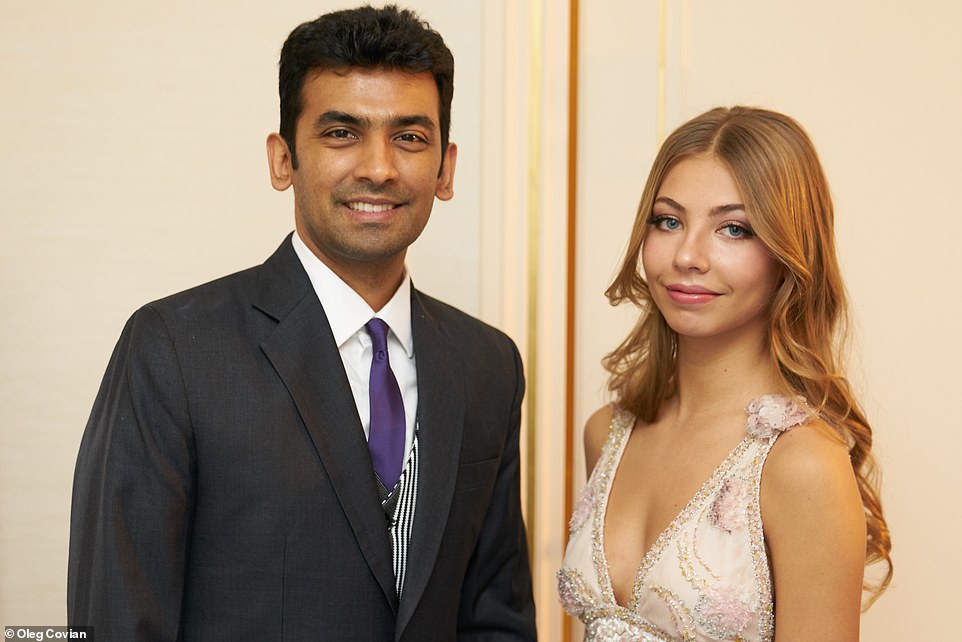 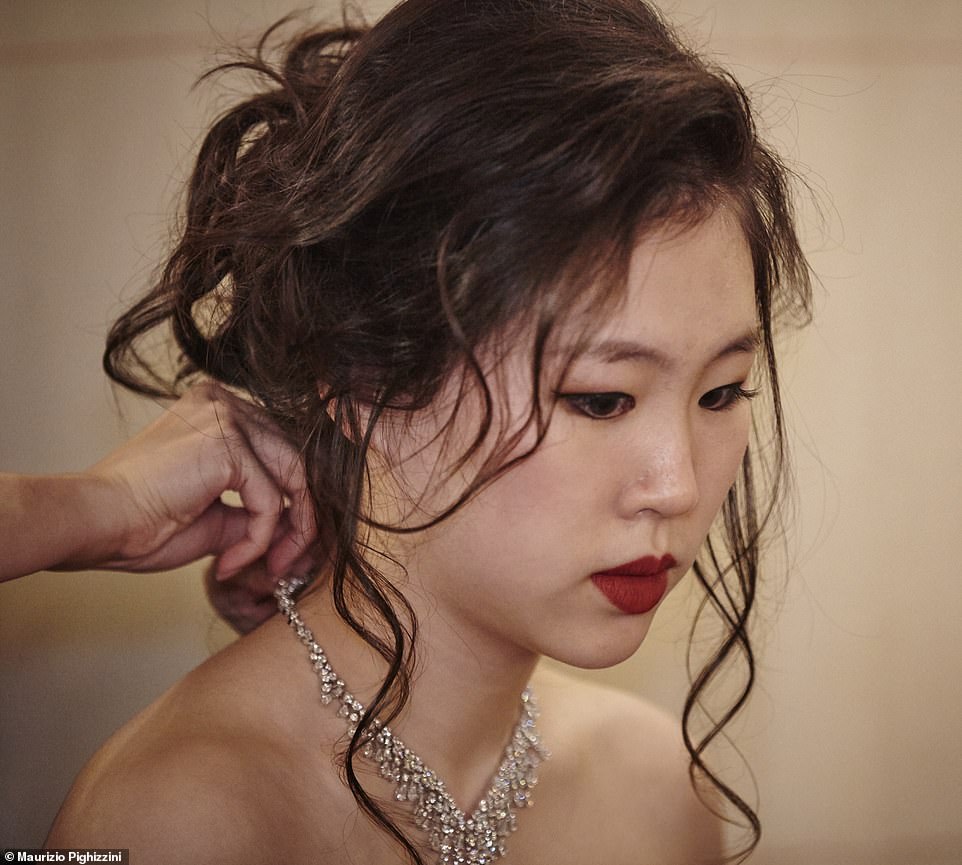 Getting ready: Another debutante adds some bling ahead of the ball 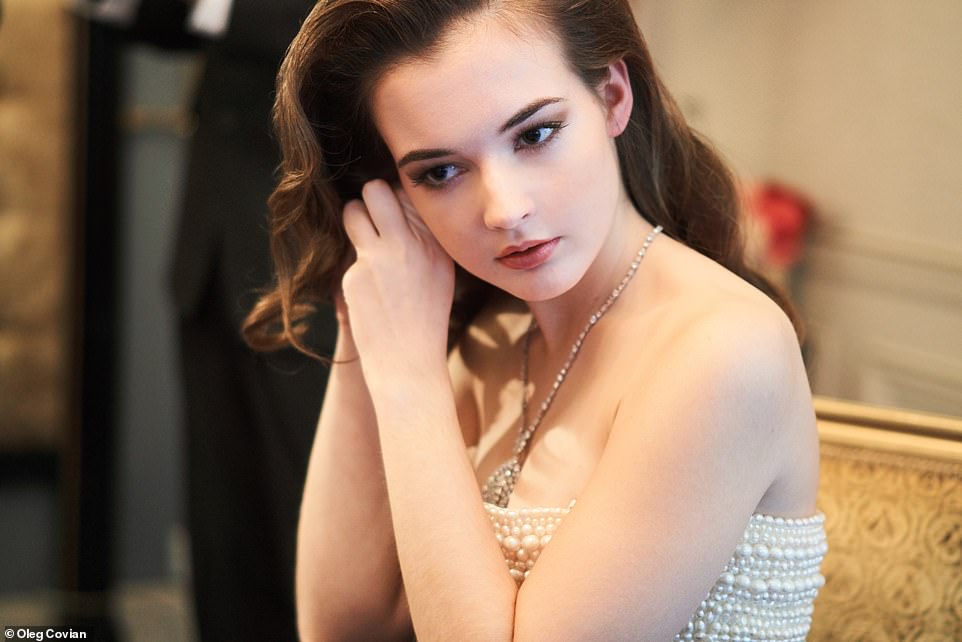 Ready to go: Countess Tatiana Mouravieff-Apostol puts on her earrings ahead of the party

‘I could not be happier to wear jewelry so authentic to me and my values to le Bal.’ 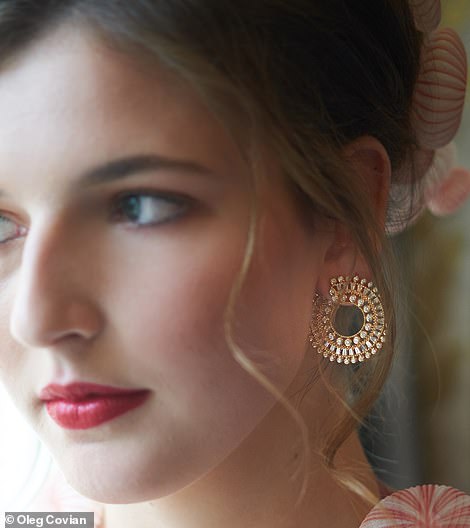 Meanwhile, Countess Tatiana Mouravieff-Apostol wore a necklace from the designer’s Peacock Collection, which was set with 33.17 carats of diamonds in 18k white gold — which cost $260,000.

Princess Louise of Orleans wore jewels that were nearly as pricey, blinging out her look with an 18k yellow and white gold tiara. The tiara had 29.92 carats of diamond and a retail value of $187,000 — which is in addition to the $22,000 18kt white gold diamond stud earrings.

But the most expensively blinged-out deb of them all was Shanaya Kapoor, whose jewelry totaled $402,000.