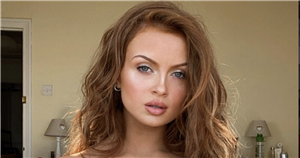 Maisie Smith sprung to fame as Tiffany Butcher on EastEnders and appeared on the famed BBC soap from 2008-2014 before taking a break from the role.

After appearing on Strictly Come Dancing in 2020, the 20 year old won over a whole new legion of fans and has amassed a whopping one million followers on Instagram, with fans including Khloe Kardashian.

So as Maisie keeps her huge following updated with the goings on in her life, how much do we know about her love life?

Who is Maisie dating?

The beautiful star, who opened up on her battle with body dysmorphia, has recently been linked to Love Island contestant Joe Garratt.

According to reports, the actress has “grown close” to the TV personality after her departure from the soap in December.

“It’s early days but they’ve got real chemistry,” a source told The Sun. “He thinks she’s so fit and really funny.

As spotted by eagle-eyed fans, 24 year old Joe has followed Maisie’s mum and sister on Instagram, leading them to believe that he is serious about getting to know the Strictly star.

Who has Maisie dated?

Maisie sparked romance rumours with her Strictly co-star HRVY back in 2020.

After singer HRVY, 23, posted a half-naked snap of himself on Instagram, Maisie left some cheeky messages in the comments section.

One comment read: “The Rock been real quiet since u posted this…,” with another saying “Omg you just reminded me my spaghetti's almost done!”

But the comment that elicited a response from HRVY said: “I think they were clapping coz they mistook u for 2009 JB [Justin Bieber].”

HRVY didn't do much to shut down romance rumours as he responded: "#onelesslonelygirl", the name of a Justin Bieber song about youngsters falling in love.

Addressing the rumours on Strictly It Takes Two, Maisie said there was a friendly "rivalry" between her and HRVY.

She explained: “He lied to me and said he wasn't very good and then he came out and did that jive! There's a bit of rivalry now.”

Previously, Maisie was linked to EastEnders co-star Zack Morris, 21, but the pair denied romance rumours after they were spotted “getting close” off screen.

The pair, who played newly married couple Tiffany Butcher and Keegan Baker, insisted they are “just friends” after a source tipped a “blossoming romance” between the duo.

Maisie, who lives in a stunning family home by the seaside, said: “I film most of my scenes with Zack, naturally we've built a great friendship. Nothing but mates.”

And Zack added: “The majority of our filming days are spent together so we have grown closer as friends but nothing more than that.”

Their denials came after the pair were reported to have been “getting close” away from the soap and were spotted leaving a cast party together, which celebrated 35 years of the soap.

A source told Mail Online: “Maisie and Zack are very close off-screen, as well as being a married couple in EastEnders. They were the only cast members to share the same cab home together after the party on Saturday night.”

While another insider added: “They couldn't resist showing their affections for each other, with Maisie tickling the back of Zack's neck as they left the party.

“Romance blossomed as their characters grew closer, which only adds to their chemistry on-screen.

“They're adorable together and the rest of the cast think it's really sweet they've connected in this way.”

For all the latest celebrity news, sign up to our daily newsletter here .