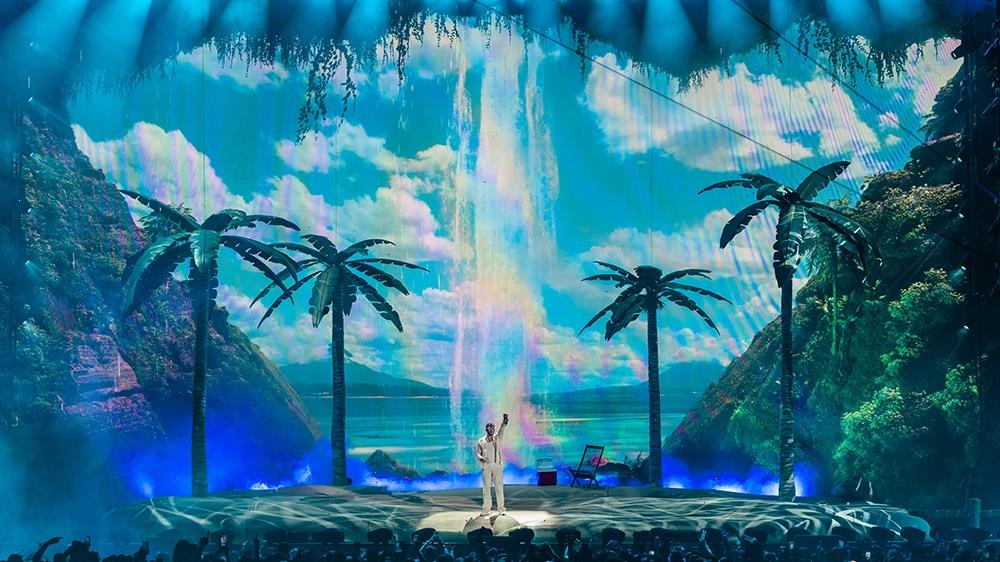 With a run of sold-out stadium shows grossing more than $91 million in August alone, Bad Bunny’s “World’s Hottest Tour” lives up to its billing. And, as with most things the Puerto Rican superstar puts his name to, the title is multi-layered. It’s both a nod to his incredibly successful 2022 and reflective of the tropical, sun-drenched theme of his chart-topping “Un Verano Sin Ti” album, which is innovatively brought to life via immersive CGI visuals courtesy of Sturdy.

Bad Bunny has been working with the Los Angeles-based production company since hiring it for a one-off live performance in 2020. He was impressed and asked Sturdy to design visuals for his “El Último Tour del Mundo” and now “World’s Hottest Tour.” “The first one was so much fun, we loved the energy that it encompassed,” Sturdy creative director Adrian Martinez says. “We were thrilled when they brought us back to work on all the visuals for the stadium show.”

Given that both tours took place in 2022, Sturdy was able to recycle some of the projections. “We were able to use content from the arena tour, but also created brand new visuals and new technology such as the floor LED.” It was a collaborative process with Bad Bunny involved every step of the way. “The man looks at every single detail,” Martinez says. His brief, he says, was “to expand the Bad Bunny universe,” a task that involved channeling the album’s beach aesthetic. He did this by incorporating majestic waterfalls, underwater jaunts and tropical sunsets, but also pushed much further, taking Bad Bunny into space.

Projections are now an integral component of virtually any stadium show, but the “World’s Hottest Tour” ups the ante by giving visuals equal weight with the ubiquitous live feed. “We inject his live feed into the imagery in a really creative way,” Martinez says, citing “Callaíta” as his favorite example. “We created a merry-go-round in 3D and were able to map the live feed into the content,” he says. “So as the ride spins around, you can see Bunny or the fans – depending on the camera operator’s decision – within it.”

If the effect is disorienting, that’s entirely the point. “It’s about creating flow and being able to lift the energy at the perfect time, so people really feel the impact of it,” Martinez says. Given the innovative approach, Sturdy opted for CGI animation for the visuals instead of pre-shot content. The reasoning was simple. They simply couldn’t capture the same camera movement and kinetic energy using real locations, and the details are important to Sturdy and Bad Bunny.

“We received a general setlist and built the narrative for the show around it,” Martinez says of the process. “Then we sent it to Benito and his team for notes.” Every song had its own concept, mood board and shot list. “It’s a very, very deep and intensive process,” he adds. However, it was worth it in the end. “It’s really emotional for me,” Martinez says. “I’ve watched the show a couple times now and every single time I’m blown away.”

Martinez got into touring production by accident. As a documentarian and music video director, he found himself at a lot of live shows, where, he says, “I often felt like the lighting was lacking, or that it wasn’t as good as it could be.” That opened the door to collaborate more deeply with artists, and Martinez and his associates formed Sturdy in 2018. “I’m looking to be able to help build entire worlds and run whole shows,” Martinez says. “We can direct the visuals, lighting and the automation and even design the stage itself.”

But there’s more. “The company is so multifaceted,” Martinez says. “We can do the live production, but we also do music video and commercial production, creative direction for album campaigns and really anything in between.” With a client list that now includes Bad Bunny, Drake, Kendrick Lamar, Rosalia, Baby Keem, and Rauw Alejandro, Sturdy will be elevating the live experience for some time to come.