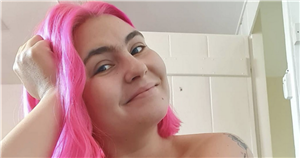 Sex educator Ruby Rare took to her Instagram to call out the site while on holiday in Tenerife.

She told her 81,900 followers that she had tons of "joyful topless pics" that she took on her sunshine break.

However, she said that they would never see the light of day due to Instagram's nudity guidelines.

This prompted the social media star to slam Instagram for "being weird about femme nipples".

The pink-haired star posted a topless snap to her Insta story to highlight her point.

However, she made sure to cut out her assets, with only her cleavage line showing, to make sure she was still within the guidelines.

Captioning the post, Ruby wrote: "Lol at the amount of joyful topless pics I took on holiday that will never see the light of day on here.

"Why you gotta be so weird about femme nipples Insta?"

"This includes photos, videos, and some digitally-created content that show sexual intercourse, genitals, and close-ups of fully-nude buttocks.

"It also includes some photos of female nipples, but photos in the context of breastfeeding, birth giving and after-birth moments, health-related situations (for example, post-mastectomy, breast cancer awareness or gender confirmation surgery) or an act of protest are allowed.

"Nudity in photos of paintings and sculptures is OK too."

The post comes after Ruby stripped off to a bikini on the holiday to proudly flaunt her "belly" and body hair.

Captioning the post at the time, Ruby told followers she felt "refreshed" after her break, however she did admit that it was hard not to compare her body to others while she way away.

Despite this, she praised herself for having the "resilience" to overcome this and enjoying her time away.

She also hit headlines for slamming 'sexist merch' she spotted while on the break.