Ed Sheeran has taken to the stand in a copyright trial regarding his 2017 chart-topping hit Shape of You. The singer has been accused of ‘borrowing’ ideas from grime artist Sami Chokri and music producer Ross O’Donoghue, who argue Shape of You infringes “particular lines and phrases” from their 2015 song Oh Why. Sheeran joins fellow pop star Dua Lipa as the latest high-profile musician slapped with a copyright infringement claim. 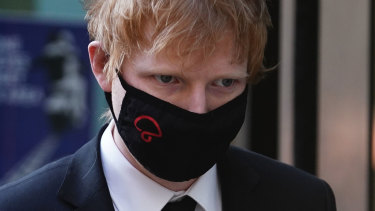 Musician Ed Sheeran outside the High Court in London on Monday. Credit:AP

I’m hearing Ed Sheeran is in trouble. Hit me with it.‹

He’s been accused of stealing.

Ed Sheeran! Stealing what? Our hearts?

No, it’s far more serious than that. Sheeran appeared in the High Court yesterday, facing accusations he lifted the hook of his hit 2017 hit, Shape of You, directly from the 2015 song, Oh Why, written by Sami Chokri and Ross O’Donoghue. Sheeran denies any allegations of copying.

Do they sound similar?

Look, you could definitely make the argument that the ‘Oh-I-oh-I-oh-I-oh-I’ hook from Shape of You sounds a lot like the ‘oh why’ hook from the Chokri/O’Donoghue song.

So, did the lawyers just play that above YouTube clip in court and then scream CASE CLOSED?

No. Barrister Andrew Sutcliffe QC – acting for the songwriters – claimed Sheeran must have known of Chokri’s song, pointing out that Chokri had tweeted him directly, and they had both appeared on SBTV, a British online music platform which helped launch Sheeran’s career.

Hmm. But Sheeran must receive a lot of tweets. I’ve tweeted him twice today already.

Well, that’s what he said. Sheeran told the court he gets “hundreds of thousands of tweets every single day” while also pointing to his long track record of giving credit where credit is due.

“I have always tried to be completely fair in crediting anyone who makes any contribution to any song I write,” Sheeran told the court. “If there is a reference to another work, I notify my team so that steps can be taken to obtain clearance.”

Well, there you go, it’s settled then. CASE CLOSED.

Stop saying that. And no, it’s not.

Sheeran has been the subject of a previous copyright claim regarding his 2015 hit Photograph. Songwriters Martin Harrington and Thomas Leonard, who wrote Matt Cardle’s 2011 single Amazing, claimed apparent similarities between the two tracks. Sheeran ended up reportedly paying the pair a $7 million lump settlement and a share of the song’s royalties.

Don’t tell me she’s wrapped up in this alleged theft ring too?

First, they come for Ed, then Dua. Who’s next in this thoroughly modern witchhunt?

To be honest, it’s not exactly a modern problem; copyright claims have been around forever.

You can go back to the 1960s when Chuck Berry sued the Beach Boys after Berry’s team claimed Surfin’ USA was eerily close to Berry’s 1958 hit Sweet Little Sixteen. Berry came out on top, and all publishing rights were transferred to him.

Or there was The Verve’s Richard Ashcroft, who wrote the 1997 hit, Bittersweet Symphony, but was denied royalties for two decades because it sampled an orchestral version of the Rolling Stones’ song The Last Time. Then you had Vanilla Ice going head-to-head with David Bowie and Queen over Ice Ice Baby.

Should we discuss the irony that Ice Ice Baby begins with the words: All right, stop, collaborate and listen.

That is quite good, actually.

Maybe he was on to something, though. Isn’t music all about collaboration? You know, Picasso had a saying, “good artists copy; great artists steal.”

Actually, Picasso never said that; it was a misquote made famous by Steve Jobs. The actual quote is “immature poets imitate, mature poets steal,” and is from T.S. Eliot’s 1920 book The Sacred Wood: Essays on Poetry and Criticism.

Now, should we discuss the irony that Steve Job himself was known as a prolific ‘lifter’ of other people’s ideas?

I won’t hear a bad word about the creator of the iPhone. CASE CLOSED.