What is it about procreating that turns men into miserable comics?  I'd like to float a theory while also making the case for the virtue of our much-mocked brand of humour.

Dads have, of course, been telling bad jokes forever but, in the last few years, the term "dad joke" has become a ubiquitous if affectionate insult online, and even its own booming comedy genre, the subject of popular Twitter and Instagram accounts and a cottage industry of books with titles like 101 So Bad They're Good Dad Jokes and Exceptionally Bad Dad Jokes. (No fewer than eight dad joke books have been published since 2017). 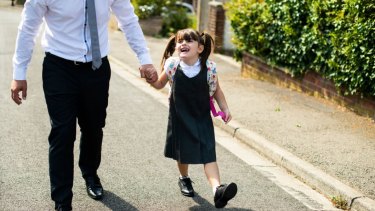 'What do you call a fish without eyes? Fsh.'

I'm a comedy critic, so being a dad can seem like an occupational hazard. It may be professional suicide to admit, but since having children, I often find myself making lame puns as well as poo jokes. I have been known to silently mouth words to my daughters when a loud train goes by until the noise quiets and I add: " … and that's the secret to life."

The demise of a dad's sense of humour begins in early parenthood while workshopping jokes in front of babies, tiny Philistines who think peekaboo is a hilarious bit of misdirection. It isn't long before these drooling rubes turn into trash-talking toddlers and fall in love with the scatological. Like so many lazy comics, we parents pander. If jokes work, they stay in the set. Gradually, we become hooked on cheap laughs. Some of us even delude ourselves into thinking we are actually funny.

This may sound like I'm blaming children for dad jokes, but only partly. Once dads develop this new sensibility, it doesn't evolve, while our audience does. When their humour matures, they mock ours and, in their search for a critical language to express their contempt, the dad joke was born.

Some fathers baulk at the term. Earlier this year, Andrew Beaujon wrote in Washingtonian magazine that it carries "the sting of ageism". Perhaps. But one of the pleasures of this humour is it gives fathers license to joke like they did as small children. Part of this is nostalgia, but not entirely. The most common dad joke relies on puns. ("What has two butts and kills people? An assassin.") To redeem them, you needn't point out that Shakespeare used such jokes. Just listen to the raucous crowd at the popular Punderdome contest in New York, essentially an excuse for young people without children to tell higher quality dad jokes.

'If at first you don't succeed, don't try sky diving.'

Dad jokes are also the training wheels for cringe comedy. Part of their purpose is to embarrass and create discomfort, a benign troll. The goal often is to get not a laugh but a groan. It's probably no accident that the oldest collection of dad jokes you can buy on Amazon is from an English writer (Ian Allen, who wrote The Very Embarrassing Book of Dad Jokes in 2012), since the British comic tradition has always been best tuned to the delight of embarrassment.

One appealing aspect of dad jokes is how they can be self-mocking and teasing simultaneously. An ironic distance is baked into them. No wonder they're popular among Generation X parents.

But they have deeper roots. Dad jokes tend to be clean, generic and short, requiring no context or explanation. In many ways, they are throwbacks to the days when comics leaned on bits that started with a trio of religious figures walking into a bar, or evergreen one-liners that began with, "Did you hear the one about … ?"

Professional comics once trafficked in these jokes, but they went out of fashion as stand-up became more ambitious, and also more personal, putting a premium on original material that reflected a specific point of view.

What's striking about the new dad joke books is how similar they are to once-essential, long-forgotten gag books from the middle of the last century, the kind written by prolific quip collectors like Robert Orben, whose work was plundered by entire generations of comics as disparate as Joan Rivers, Steve Martin and Dick Gregory.

Say what you will about a joke like, "What do you call someone with no body and just a nose? Nobody knows," but it doesn't age.

The history of comedy is not a linear story of steady progress, and the dad joke may just be the latest incarnation of a genre whose appeal is deep-seated and will never die so much as be reborn in different incarnations.

'What rhymes with orange? No it doesn't.'

The best argument for dad jokes is that bad art can be tremendous fun. Anyone who tells you differently has never cackled their way through an abysmal movie as they made fun of it with good friends, or gleefully beat a joke into the ground, or seen stand-up comedian and former Saturday Night Live cast member Norm Macdonald spoof a roast by telling the most hackneyed jokes with complete conviction. Some of the biggest laughs of my life have been from bad jokes, because what's funnier than failure?

Bad jokes clarify the feat of good ones but also show their limitations. Stale punch lines rarely segregate those who get it from those who don't, but they unify everyone in sighing condescension. They're inclusive, the opposite of inside jokes.

In a time when bad jokes often mean jokes that offend, dad jokes carve out space to hate comedy for purely aesthetic reasons. Politics are involved, of course, because where is the mum joke? That the term doesn't exist says less about mothers' senses of humour, which are just as corny as fathers', than about restrictive gender roles that cast women as humourless disciplinarians.

But surely one of the few things that everyone can agree on is that "What do you call a fake noodle? An impasta" is an absolute abomination.