Dumped cabinet minister Darren Chester has apologised for the federal government’s role in the nation’s sluggish coronavirus vaccine rollout but believes the media must share some blame, saying sensationalist reporting has fuelled levels of hesitancy.

The Nationals MP, who was sacked from the front bench following Barnaby Joyce’s return as Deputy Prime Minister last month, said on Thursday he was “sorry” the rollout had experienced so many delays and difficulties. 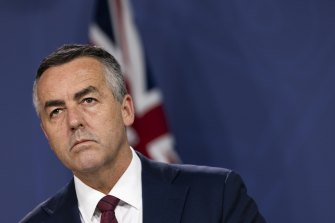 Former veterans’ affairs minister Darren Chester said if it helped people to hear it, then he was “sorry” the rollout had taken longer than expected.Credit:Brook Mitchell

Prime Minister Scott Morrison faced several grillings on breakfast radio on Wednesday over the vaccination program, admitting to “regrettable” delays and revealing he had repeatedly asked the nation’s peak medical experts to review their advice on the AstraZeneca vaccine in order to accelerate the rollout.

Treasurer Josh Frydenberg also refused to apologise for the rollout in a heated clash on breakfast television on Thursday with Nine’s Today presenter Karl Stefanovic.

“We accept responsibility, that’s even more important because what is key here is what takes us forward,” Mr Frydenberg said in response to the host’s querying whether he was prepared to say sorry.

As of Wednesday, there have been 10.47 million doses administered nationwide. About 29 per cent of the population has received one dose and 11.6 per cent two doses.

Mr Chester said if it helped people to hear it, then he was “sorry” the rollout had taken longer than expected.

“And I’m sorry that some people have lost confidence in our government and our world-class health system as a result,” he wrote on social media.

“I was a member of federal cabinet when decisions were made to pre-order vaccines and develop a capacity to manufacture in Australia and I supported those decisions. Just as I supported decisions which have saved thousands of Australian lives by protecting us from the exponential growth in cases that other developed nations have experienced.”

The former veterans’ affairs minister said would not “point the finger and blame anyone for the delays” but there were some factors the media had chosen to ignore.

“For months, the mainstream media added to vaccine hesitancy by heavily reporting the tiny number of adverse reactions and now criticise the government because AstraZeneca has a poorer reputation than Pfizer,” he said.

“Some people were reluctant to get vaccinated when there were no cases for months but the recent outbreaks have certainly increased demand.”

He said the decision by health authorities not to recommend AstraZeneca for people under 60 was not consistent with other nations and would be different if Australia had huge coronavirus case numbers.

“In a bizarre way, we are victims of our own success in suppressing the virus. And in relation to demanding extra Pfizer supplies, it’s a bit hard to make the case for a rich nation with very few cases to take limited supplies from developing nations with thousands of daily deaths,” he said.

Mr Chester, who represents the seat of Gippsland in eastern Victoria, said governments at all levels had generally made good decisions.

“I know it’s frustrating and the uncertainty around lockdowns is stressful and costly for local businesses. Please try to stay positive and optimistic – we’ve proven our resilience many times before and we will get through these challenging times as a region.”

“I think he would have been better off saying sorry. And everyone has made mistakes. No one’s perfect,” Mr Albanese told Melbourne’s KIIS 101.1 FM with Jase and PJ.

“The problem is, you know, he said so many times that it’s not a race. And the truth is it is a race … he tried to say that was about the approval of the drugs. And that’s not true either. That’s not true.”