Every story I’ve ever heard about a friend’s amazing experience with crystals starts with a preface about how they’re "not really" into crystals. This is then followed by evidence that they are, seemingly, very much into crystals: tales of energies unblocked, focuses regained, love connections made. It makes me wonder where the bar for qualifying as a "crystal person" is set — do you have to, like, spend weekends mining your own selenite or something? But it also helps me explain my own story: I, too, am not really into crystals. But I thought that maybe, just maybe, a water bottle with a crystal embedded in the bottom could fix my entire life.

I am a millennial woman, so, naturally, I own a few crystals. According to numerous trend reports, we’re the most crystal-loving generation of Americans since the ’70s, when Baby Boomers first learned about the alleged spiritual powers of amethyst. While that generation was motivated by the countercultural values of the ’60s, experts have theorized that millennials love crystals so much because we’re less interested in rigid, traditional religion than we are in spiritual practices that feel personally meaningful to us. That tendency has led to booms in popularity for astrology, witchcraft, and, of course, crystals.

Crystals and stones have been used for health and meditation in various religious and spiritual traditions for thousands of years, and I know a number of people my age who have a powerful and very real relationship with their crystals. But I am not one of those people. I don’t have a spiritual relationship with much of anything, and can’t even remember when or how I acquired the three tiny crystals in my possession — some long-ago post-break-up emotional wellness bender? A last-ditch effort to combat last year’s seasonal depression? But they sit on my nightstand, where I don’t feel like they really do anything, and also am afraid to move them at all, just in case they’re the one thing that’s actually holding my life together. 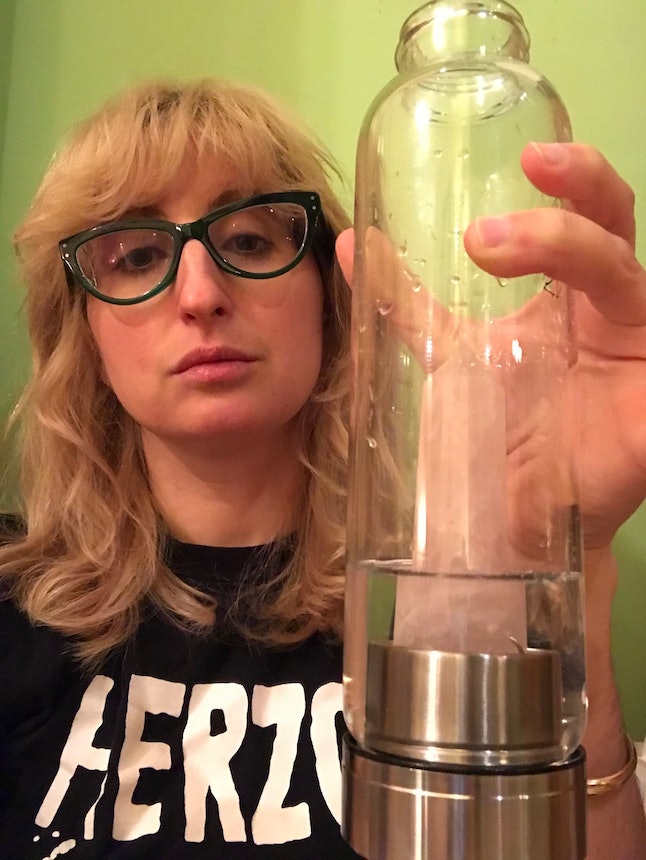 It is with all of this in mind that I picked up a crystal water bottle by Glacce, which can be yours for $80. "Crystal elixir," the beverage these bottles are supposed to help you make, is pretty simple: according to the Glacce website, drinking water that has had a crystal soak in it supposedly helps you better absorb that crystal’s alleged positive properties.

One could easily create a crystal elixir by just soaking crystals in a glass of water and then drinking that glass of water (but be careful and check that you’re not trying to make crystal elixir with pyrite, which contains toxic elements like lead, or any other mineral that is unsafe for human consumption). But, like everything in America, there’s a luxury version. There’s Uber Black, $800 sweatpants, and restaurants that somehow charge you $30 for what is essentially a personal pan pizza. So why not a pricier and more aesthetically pleasing contraption to make your crystal elixir? 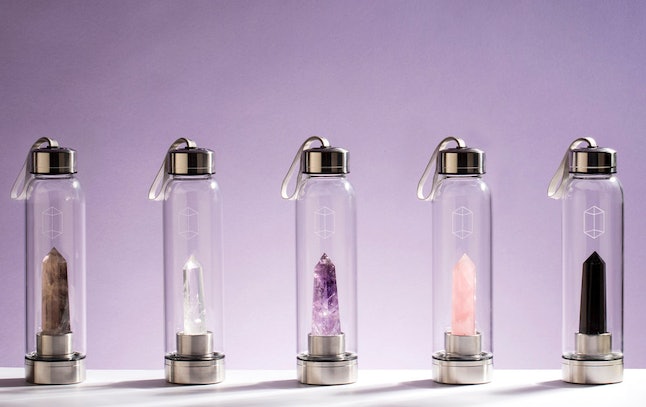 If it wasn’t yet clear, it should be noted that I am something of a skeptic; I wrote an entire book about the excesses of high-end wellness culture, and in my crankier moments, have been known to dismiss everything from eating zoodles to apologizing as a "New Age scam." But like a great many skeptics, what I want most of all is to be convinced. I’m salty at times towards New Age culture because I just want so badly for all of it — crystals, auras, psychic activity, everything — to be real. I want there to be more to life than just going to work, paying my credit card minimum, and cleaning my bathtub over and over until eventually I keel over and die. I want the true, magical nature of the universe to jump out of an alley and scream in my face that there’s so much more. To quote the greatest mystical weirdo of all time, Agent Fox "Spooky" Mulder: I want to believe.

And for my week with the crystal water bottle, I decided to try, as best I could, to believe in the large, pretty chunk of rose quartz attached to the bottom. Rose quartz is often thought of as the crystal that brings romantic love in your life, which I wasn’t looking for (my marriage is about the only thing in my life that doesn’t stress me out these days). But according to the Glacce website, rose quartz is tied to "compassion, love, peace, tenderness, healing and nourishment," and rose quartz crystal elixir is thought to "enhance communication and [have] the ability to make surrounding environments feel open and safe." So I thought, yes, let’s give it a shot. I mean, who would see the prospect of peace and enhanced communication, and just say "next!"?

Sadie Kadlec, an intuitive healer at Brooklyn’s Maha Rose Center for Healing, tells Bustle that there’s no risk to working with crystals, even if you have no idea what you’re doing. "They don’t harm in any way," says Kadlec. "It’s not like [having] a rose quartz in your water bottle and not knowing how it works is gonna somehow be detrimental to your health." But, Kadlec adds, "I do believe that there needs to be some more consciousness brought into working with them."

In short: just showing up and expecting your crystal water bottle will do all the heavy lifting won’t yield the same results as when you use the bottle as an opportunity to think, meditate, and otherwise focus. "Magic is always stronger when there’s awareness and intention," says Kadlec. "Those are kind of like weird buzzwords I hate using, but it’s true. Anytime you do something with intention […] you feel better about it."

I wasn’t sure what my intention was with my crystal water bottle, besides tricking the universe into showing me that the power of crystals (and thus, a billion other spiritual things) was real. But I kept forgetting to think about that during my week with it, whether I was drinking or not. So I thought I’d just focus on being in a better mood, which I also kept forgetting to think about. I mostly drank my water first thing in the morning, before my coffee, so primarily I thought about how I was sleepy, cranky, and a little too cold.

The first thing I noticed about having a crystal in my water bottle: it makes the water taste, uh, different. Not bad, per se, but definitely like maybe there was a rock soaking in the water overnight, which is not a flavor profile that I am used to. 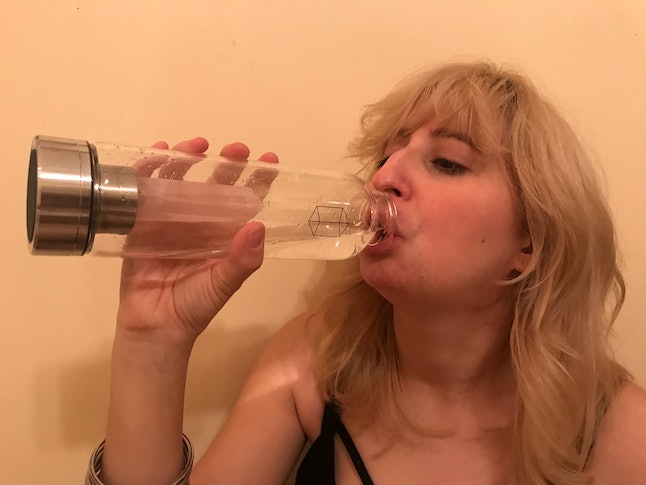 I also made a habit of chugging from it first thing in the morning because the bottle is heavy. Made of glass and metal, it’s beautiful to look at and weighs more than a pound while completely empty. I tried to just toss it into my tote bag like I would a regular water bottle, but found myself walking around with my tote-supporting shoulder about an inch lower than the other all day long.

I drank my crystal water every morning like clockwork, kind of expecting nothing to happen, but also really eagerly anticipating that something huge might happen. Kadlec says that even if you aren’t meditating and working with your crystals the way a dedicated practitioner would, that doesn’t mean they won’t do anything for you. Your crystal, she says, will "work in the way that it needs to work for you." I was hoping that for me, that would mean that when I was least expecting it — like while I was buying roach traps at CVS or something — I’d be attacked by a rogue beam of self-love. My angry outer layers of self-defenses would melt, because I would no longer need them, because I wouldn’t hate myself so deeply inside. I’d develop a spiritual life. I’d forgive people more often, or, you know, ever. Maybe I’d even become so happy that I’d let those little bugs live.

Of course, none of that happened. I was just drinking water, after all. 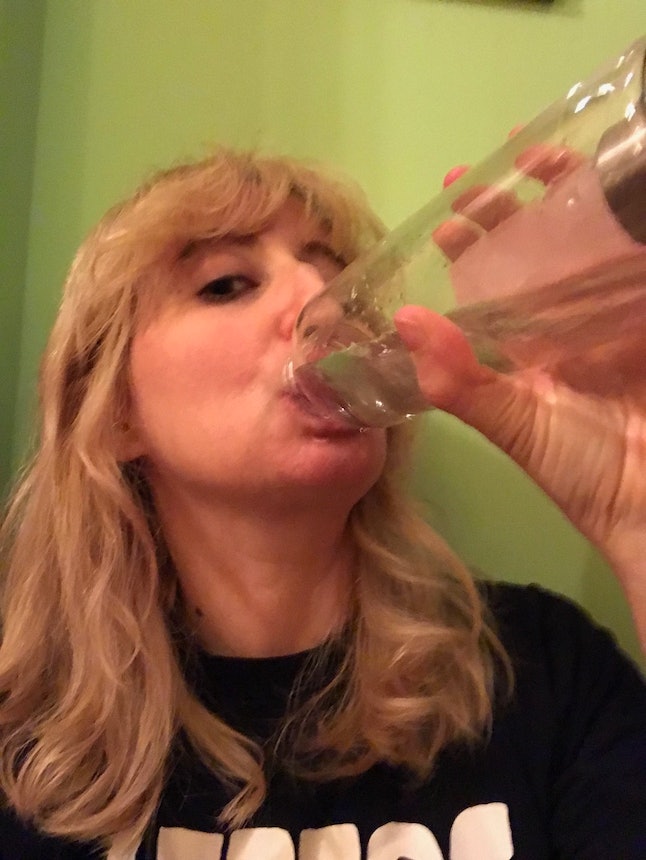 A small study conducted in 2001 by the European Congress of Psychology found that crystals do work via the placebo effect — essentially, if you expect crystals to help you, they’ll help you. (It should be noted here that the medical community is pretty united in thinking that crystals do not have any medical benefits, and should never be used in lieu of medical treatment.) I don’t mention this to imply that this is somehow a failure on the part of crystals, or the folks who champion them; though they’d use different words, crystal experts essentially say the same thing. For example, Glacce cofounder Julia Schoen told Goop, “If you believe the crystal can help you, you open up so many doors and become more receptive to its power.”

But what if you don’t believe the crystal can help you? That’s the catch 22 of faith — you generally have to believe in order to find the proof that allows you to keep believing. That’s certainly where it’s always gotten me; I’ve been too afraid of being wrong, found that prospect too humiliating, to believe in anything. Maybe this counts as that crystal working in the way that it needs to work for me — I don’t like myself any more than I did before I started this experiment, but I did admit to some long-standing crippling emotional issues, which I guess isn’t nothing. It’s just not what I expected when I picked up that fancy water bottle.