Wave heights and wind strength are not usually things to worry about on the New York Subway.

But moving subway carriages into position on the set of the Opera Australia production of West Side Story  at Mrs Macquarie's Chair on Sydney Harbour is a different matter entirely. 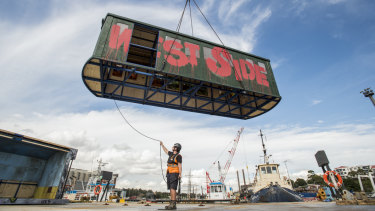 Martinez Kingsley supervises the loading of a subway carriage onto a barge that will transport it across Sydney Harbour to the set of West Side Story.Credit:Steven Siewert

Clif Bothwell, technical director for Opera Australia, has been keeping an eye on tidal conditions as he supervises the transport and installation of four subway carriages weighing up to 1.4 tonnes each.

The carriages daubed in graffiti were constructed in Opera Australia's workshop in Surry Hills, then hoisted onto a barge at Rozelle last week for the journey across Sydney Harbour to Mrs Macquarie’s Chair.

“The tide changes the height of the barge when we’re loading and unloading it,” he said. “The wind blows thing over and the rain makes everything slippery and more difficult to work in.”

West Side Story is the first musical staged for Opera on Sydney Harbour and Bothwell said it was the "most challenging" production so far on a technical level because of the size of the moving objects.  Bothwell has previously supervised the construction of a giant chandelier for La Traviata, a billboard for Carmen and the head of Nefertiti for Aida. 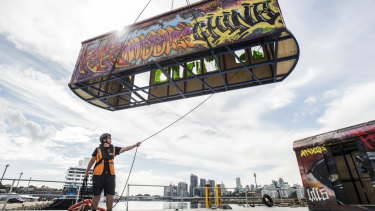 Four subway carriages daubed in graffiti were built by Opera Australia for its outdoor production of West Side Story.Credit:Steven Siewert

West Side Story is a retelling of Shakespeare’s Romeo and Juliet transposed to rival gangs in New York. The musical premiered on Broadway in 1957 and was later turned into an award-winning 1961 movie starring Natalie Wood as Maria, the sister of a gang leader of the Sharks, who falls in love with a former member of the rival Jets gang.

The Opera Australia production is directed by Francesca Zambello, who previously produced the musical on a stage floating on a lake for Austria’s Bregenz Festival in 2003. That set featured the twisted wreckage of a skyscraper reminiscent of the terrorist attack of September 11, 2001.

Bothwell said the subway carriages in the Opera Australia production were smaller than life-size and without wheels. One would open up to become locations such as Doc's Store, while two would appear to crash off the stage and into Farm Cove.

The set would also feature a giant highway flyover, an arm of the Statue of Liberty, Maria’s bedroom and the bridal shop.

“We’ve got a lot of weight moving up and down the stage and we’ve got to think about doing all that in the wind and the rain,” Bothwell said. “And making sure we’re safe if a storm comes through.”

Set designer Brian Thomson, who also designed the sets for Opera on Sydney Harbour's La Traviata and Carmen, was inspired by photos of old subway carriages dumped in the ocean to serve as artificial reefs.

Thomson, said the set also served as a tourist attraction.

“Thousands of people walk past it,” he said. “It’s a bit like Luna Park – it’s a spectacle that also has to serve the show.”

Opera on Sydney Harbour’s West Side Story runs from March 22 to April 21.