One day in October last year, former surgeon Afif Hadj was standing in the car park of one of the four aged care homes he owns.

The home, in Sunshine West, is next door to another centre where 64 residents, staff and close contacts caught coronavirus. Eight residents died. 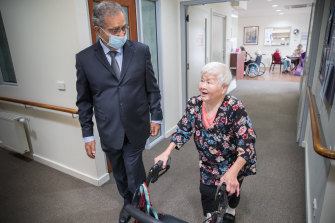 Afif Hadj from Hope Aged Care with resident Mei Mei Chiang, who has stayed at the company’s Brunswick centre for eight years.Credit:Jason South

“Their car park and my car park, there was no fence in between,” said Professor Hadj, who recalled how he watched potentially dangerous material, that should have been put in clinical waste bins, blow into his centre’s car park.

“I employed a builder on a Sunday, I said, ‘I don’t care what you’re doing, come and put a bloody fence up’.”

Hope Aged Care’s Melbourne homes are in Sunshine West, Brunswick and Gladstone Park and not one of its 255 residents, nor its staff members, nor their contacts, caught coronavirus.

Some working in the aged care sector point out that this may just have been luck. There are 789 aged care facilities in Victoria and coronavirus got into 174 of them. Homes in Melbourne had almost all the state’s 2000 aged care infections. 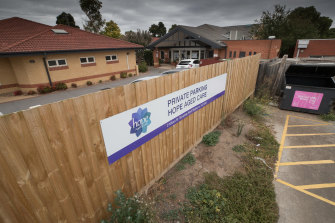 The fence Hope Aged Care had built last year during the pandemic, between it and another aged care home.Credit:Jason South

It was terrible for homes with infections: families lost loved ones, funerals were capped at 10 people and the pandemic separated families from aged relatives for months on end. Residents were often confined to their rooms for weeks at a time, as homes desperately tried to get on top of infections.

Hope Aged Care’s homes are in Melbourne’s northern suburbs, through which the virus cut a deadly swath. In the end, 655 aged care residents died in Victoria – in many cases due to poor infection controls.

However, residents in the Hope group’s homes experienced little of the drama experienced elsewhere. Mei Mei Chiang, 81, has lived at its Brunswick home for eight years.

“I wasn’t that worried at all, because before the virus started, we were informed, the home was really proactive,” Ms Chiang said.

“Straight away, the staff had PPE and the masks and sanitiser was around the place. My family, who has a medical background, weren’t worried about me.”

Professor Hadj said preventing infection is one of the biggest issues for surgeons when they operate.

“Any surgeon on this planet, what they fear most: it’s infection,” said the 71-year-old former trauma surgeon, who worked for many years at Preston’s former PANCH hospital.

Professor Hadj – who moved to Australia from Lebanon in 1959 – retired from surgery a decade ago and took more of a role in aged care.

A major issue in aged care before coronavirus came along was influenza and gastroenteritis, often brought into homes by visiting children.

Professor Hadj had outbreaks of gastro at two of his homes a few years before the pandemic. It meant they had personal protective equipment supplies in quantities greater than many other homes.

“Sanitiser, lots and lots of PPE, I just had a room full of stuff,” he said.

“I thought, ‘If this is going to go through, there is going to be shortages’, I then ordered like you have no idea and I got my staff to take it home.”

He also sat his staff down and retrained them in wearing PPE and infection control.

This week’s aged care royal commission made numerous recommendations around staffing and working conditions, with a demand for better staff registration.

However, it wasn’t staffing levels so much as dedicating most of its 300 staff to individual homes that may have been crucial to Hope Aged Care’s zero COVID-19 tally. Previously, 30 per cent of the homes’ staff worked across multiple facilities.

When the second wave washed over Melbourne in July, Professor Hadj said staff were asked to choose: “You either work for me, or for the other mob. You work at one site.”

This was later brought into the rules by state health authorities, but Professor Hadj said he “knew instinctively” it wouldn’t be relatives of residents who would bring in coronavirus.

“We might think [of aged care staff] ‘You stupid person for bringing it in’ [but] it’s understandable – if they don’t work, they don’t eat.”

Those who elected to work only at one home got a promise their jobs were guaranteed once the outbreak was over, and extra pay if they lost out. Those who chose to stay became more loyal, staying home if potentially infectious.

“Keeping the virus out was due to my staff being so responsible – people in aged care are some of the most undervalued workers in our community,” Professor Hadj said.

He said big business moving into aged care has damaged it badly.

“You do not have that person sitting there, watching and saying, ‘you are not doing the right thing’ to people who don’t,” he said.

“I don’t make myself out to be the Joan of Arc in all this, but I care about my residents, and it’s sad that aged care is becoming more and more corporatised.”