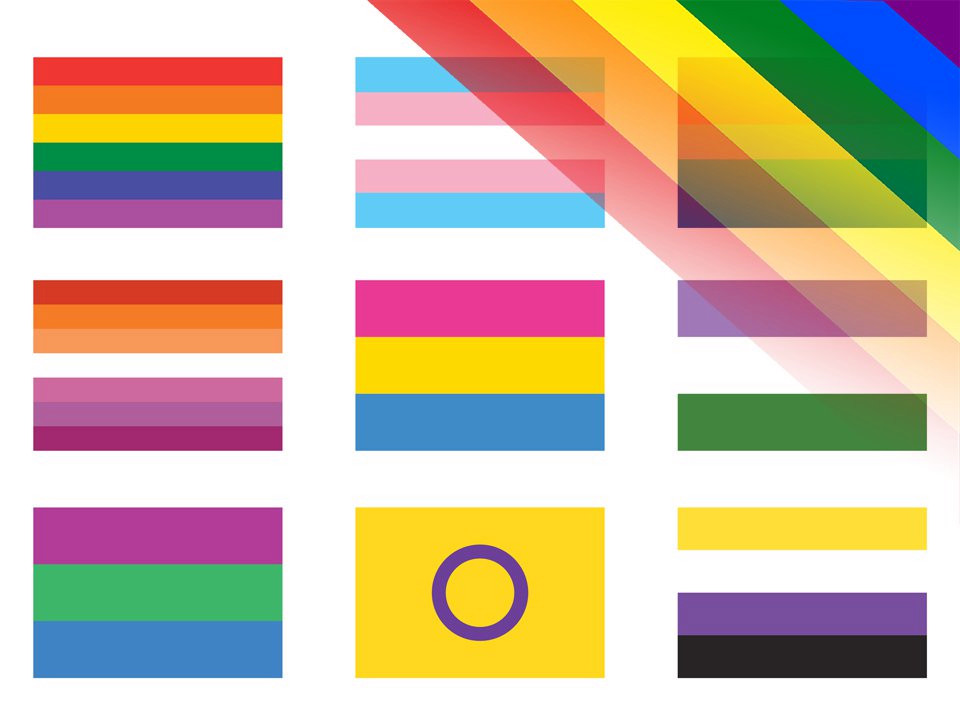 June 1 marks the beginning of Lesbian, Gay, Bisexual, Transgender and Queer (LGBTQ+) Pride Month in the UK and in many countries around the world.

Held annually in June to commemorate the Stonewall riots, which occurred at the end of June 1969, Pride is also about communities coming together in celebration, protest, unity and solidarity.

While Pride celebrations looked different in 2020 and 2021 due to the Covid-19 pandemic, Pride Month events will hopefully be back to normal for many in 2022.

Ruth Hunt, Stonewall’s Chief Executive, said: ‘Pride is a time when we stand together, in celebration of what we’ve achieved and to renew our commitment to fight for true equality for all LGBT people.’

‘We have not achieved equality until every LGBT person, of every colour and background, is able to enjoy equality within our community and outside of it,’ Phyll Opoku-Gyimah, Executive Director of UK Black Pride added.

Often, during Pride Month (and indeed at all times of year), you’ll see the use of rainbow and colourful flags, representing different groups of the LGBTQ+ community.

But how many are there, and what do they stand for?

How many Pride flags are there?

The rainbow flag is already a well-known symbol of gay pride.

However, there are many more flags used to celebrate the diversity of sexualities and gender identities that are important to know about and recognise.

Queer In The World says there are currently more than 50 flags you might spot, though the number isn’t fixed – as there may be multiple designs and variations for any particular flag.

What are some of the Pride flags?

Below are just a few examples of Pride flags you might see during Pride Month – or at any time of year.

Originally designed by American artist and gay rights activist Gilbert Baker in 1978, the rainbow flag was originally made up of eight stripes.

The colours of the flag each had a meaning assigned by Gilbert:

Recalling the moment he came up with the idea of a rainbow flag, Gilbert explains in his book Stitching A Rainbow:

‘As a community, both local and international, gay people were in the midst of an upheaval, a battle for equal rights, a shift in status where we were now demanding power, taking it. This was our new revolution: a tribal, individualistic, and collective vision. It deserved a new symbol…

‘…a Rainbow Flag was a conscious choice, natural and necessary.

‘The rainbow came from earliest recorded history as a symbol of hope. In the Book of Genesis, it appeared as proof of a covenant between God and all living creatures. It was also found in Chinese, Egyptian and Native American history.

‘A Rainbow Flag would be our modern alternative to the pink triangle (the symbol for the gay movement up until the 70s). Now the rioters who claimed their freedom at the Stonewall Bar in 1969 would have their own symbol of liberation.’

The rainbow flag many will be most familiar with today is a slightly amended version of the original flag by Gilbert and has been popular since 1979.

Due to the unavailability of hot-pink fabric for those looking to make the flags, that colour was the first to be dropped from the design, before it was modified again to lose the turquoise strip in 1979.

In June 2017, a new variation of the rainbow flag was created, adding black and brown colour strips to the top of flag.

The new additions were to create a more inclusive flag and recognise people of colour in the LGBTQ+ community.

Another iteration of the rainbow flag was revealed in 2018, when designer Daniel Quasar, who identifies as queer and non-binary, redesigned the original flag to place a greater emphasis on ‘inclusion and progression’.

‘The 6 stripe LGBTQ flag should be separated from the newer stripes because of their difference in meaning, as well as to shift focus and emphasis to what is important in our current community climate,’ he explained via his KickStarter campaign for the project.

‘The main section of the flag (background) includes the traditional 6 stripe LGBTQ flag as seen in its widely adopted form so as not to take away from its original meaning.

‘The trans flag and marginalized community stripes were shifted to the Hoist of the flag and given a new arrow shape. The arrow points to the right to show forward movement, while being along the left edge shows that progress still needs to be made.’

The Bisexual Pride flag was created by Florida based bisexual activist Michael Page in 1998.

Following Page’s creation of the The Bisexual Pride flag, he spoke to Monica Helms, an American navy veteran who came out as trans in 1987, about the creation of a flag for the trans community.

Monica designed the flag in 1999 and describes the meaning of the transgender flag as follows:

‘The stripes at the top and bottom are light blue, the traditional color for baby boys. The stripes next to them are pink, the traditional color for baby girls. The stripe in the middle is white, for those who are intersex, transitioning or consider themselves having a neutral or undefined gender. The pattern is such that no matter which way you fly it, it is always correct, signifying us finding correctness in our lives.’

The above flag, featuring seven different shades of pink, white and red, is flown as the official lesbian flag.

Sometimes it features the addition of a lipstick mark in one corner and is flown to celebrate the subculture of Lipstick Lesbian, members of which stick to a ‘feminine’ image rather than taking a ‘butch’ one.

Some prefer to use a variation of this flag with fewer stripes, with orange stripes further up, with white and pink stripes underneath.

Designed in 2013 by Intersex Human Rights Australia, this flag intentionally avoids the use of traditionally gendered colours such as blue and pink to celebrate the intersex community.

Intersex is a general term used for a variety of conditions in which a person is born with a reproductive or sexual anatomy that doesn’t seem to fit the typical definitions of female or male.

Explaining the meaning of the flag, the group states: ‘The circle is unbroken and unornamented, symbolizing wholeness and completeness, and our potentialities. We are still fighting for bodily autonomy and genital integrity, and this symbolizes the right to be who and how we want to be.’

Created in 2010, the designer of this flag is unknown but the colours represent pansexuality’s interest in all genders as partners. The pink represents women, yellow non-binary and gender-nonconforming people, and the blue is for men.

Also created in 2010, this flag was designed by a number of asexuality sites, led by users on AVEN.

Asexuality is defined as a lack of sexual attraction and an asexual is someone who is not sexually attracted to anyone.

As with the other Pride flags, each of the colours has a meaning: black represents Asexuality, grey represents Grey-Asexuality and Demisexuality, white represents for non-asexual partners and allies and purple signifies community.

A polysexual is someone who is romantically or sexually attracted to some but not all genders. The flag has been designed to reflect this.

The pink represents attraction to females; the blue for males. The green is for an attraction to those who don’t conform to either gender.

This flag celebrates the infinite selection of partners available to polyamorous people.

The meaning of flag is explained as: ‘blue represents the openness and honesty among all partners with which people who are polyamorous conduct their multiple relationships; red, represents love and passion and black represents solidarity with those who, though they are open and honest with all participants of their relationships, must hide those relationships from the outside world due to societal pressures.’

Created in 2014 by 17-year-old Kye Rowan, the yellow symbolises gender outside a binary. The white, a mix of all colours, represents those with many or all genders.

Purple stands in for those who feel both binary male and female or fluid between them. The black is for the agender community, without sexuality or colour.

JJ Poole created this flag in 2012 for those who does not identify themselves as having a fixed gender and are gender fluid.

Created by genderqueer writer and advocate Marilyn Roxie in 2010, this flag was created ‘to help create visibility for the genderqueer community and related identities’ according to Marilyn.

People who are genderqueer tend to be those who do not subscribe to conventional gender distinctions but identify with neither, both, or a combination of male and female genders.

This list is not exhaustive, and Pride flags or their design variations left off this list have not been done so intentionally.

This year marks 50 years of Pride, so it seems only fitting that Metro.co.uk goes above and beyond in our ongoing LGBTQ+ support, through a wealth of content that not only celebrates all things Pride, but also share stories, take time to reflect and raises awareness for the community this Pride Month.

And we’ve got some great names on board to help us, too. From a list of famous guest editors taking over the site for a week that includes Rob Rinder, Nicola Adams, Peter Tatchell, Kimberly Hart-Simpson, John Whaite, Anna Richardson and Dr Ranj, we’ll also have the likes Sir Ian McKellen and Drag Race stars The Vivienne, Lawrence Chaney and Tia Kofi offering their insights.

During Pride Month, which runs from 1 – 30 June, Metro.co.uk will also be supporting Kyiv Pride, a Ukrainian charity forced to work harder than ever to protect the rights of the LGBTQ+ community during times of conflict. To find out more about their work, and what you can do to support them, click here.