I spent the last school holidays child-free (I know that sounds like fun, but it really isn’t) and to avoid the weirdness of being in my own house sans children, I embarked on a "house and dog-sitting" binge. From Manly to Mosman to Coogee, I made myself available for absent friends.

The interesting thing is, when you stay in other people’s houses, you quickly get a sense of what they do and don’t believe in; sometimes just by opening a kitchen drawer. There are things I was surprised to discover people I thought I knew just do not believe in. 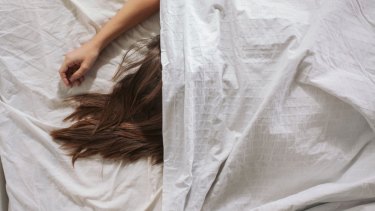 Not everyone uses a top sheet. Who are these people?Credit:Stocksy

Top sheets
Some people don’t believe in top sheets. I had to put it in a sentence to make sense of it. They go: fitted sheet, doona-in-a-doona-cover, the end. To be fair, I think the reason I do believe in top sheets is because I’m lazy. I don’t want to have to wash the doona cover and then put the doona back in the cover any more regularly than twice a year. Hence, therefore, ergo: top sheets for me.

Some people have them but they choose not to use them. (What madness is this?) I was told by one house owner, ‘We don’t use the dishwasher, but you are welcome to it.’ WHAAAAT?

It has come to my attention that some people do not have a coffee machine anywhere in their house: not a Nespresso machine, not drip filter or plunge, not even a small stovetop espresso maker. I was so discombobulated by this alternate reality that I found myself opening and closing the same cupboards over and over, convinced I’d just missed it the first time.

Kitchen scissors
To me, a pair of robust kitchen scissors is as essential to a house as running water. But some people, when you open up the top drawer, simply do not keep a pair of scissors there. I kept closing the drawer and opening it again in the hopes that a pair would materialise. In the end I had to use a steak knife to cut open a packet of pasta. It’s just not civilised.

Bath mats
I know they’re ugly but they’re just so functional … and absorbent. At one house I searched high and low and could not find a one. Turns out, she doesn’t believe in them.

Streaming services or any kind of ‘on demand’ television

You don’t realise what a dire situation free to air TV is until you are forced back onto it for want of other options. Not only do you have to time your day around the program schedule, (instead of vice versa) but there really is nothing good on free to air anymore. And if by some miracle, there is something good on, you have to wait for it to come on or it was on last night and you missed it. Who can live like that? We’re not animals!

Having multiple quantities of random useful things
If a basic household item is useful, I like to have at least two, just in case of an emergency. A lot of people agree with this way of life. For instance, one house I stayed in had eight pairs of mini tongs in the kitchen drawer. Another house had six teeny-tiny whisks. If you stayed at my house, you would find no less than four varieties of sieve or pasta strainer.

Some people have dishwashers but they choose not to use them. What madness is this?

Which brings me to the last house I stayed in on my house-sitting binge which had only one handle-less sieve. ONE! WITHOUT A HANDLE! And there was no colander: the armless sieve was the only way to drain pasta. What I’m saying is, if you had two sieves, the fact that the first one didn’t have a handle, wouldn’t matter so much.

TVs as altars in the living room
After experiencing a few hidden TV scenarios, I am now completely converted to this concept of banishing the television from the living area: whether it’s hidden in a cabinet with magic-reveal door, or completely outcast to a separate, purpose built TV room. If I had more rooms (or the time and energy to employ a cabinetmaker) I would totally banish my TV’s presence from the living room too.

Microwaves
One out of my three houses did not have a microwave. Just an anomaly? Not so, it’s a surprisingly common aversion. My sister is also a microwave naysayer as is another close friend of mine. Suffice it to say, it makes leftovers an unnecessarily difficult scenario.

Dogs who sleep in kennels
When you dog sit other people’s dogs, you have to do as the owners do, so as not to distress the dog and trigger an indoor toileting incident. I learned this the hard way when I banished my canine charge from the master bedroom because I thought he slept in the kennel.

The kennel however, was a misdirect. My furry friend, liked to sleep on the master bed with his bum on the spare pillow next to my head. He then proceeded to blow off through the night at regular intervals. But I couldn’t abandon him (and his toxic miasma) to sleep in another room, because then he’d get anxious and pee on the floor again. So I had to stay the course and brave the pungent fumes. Who says I’m not a dog lover?