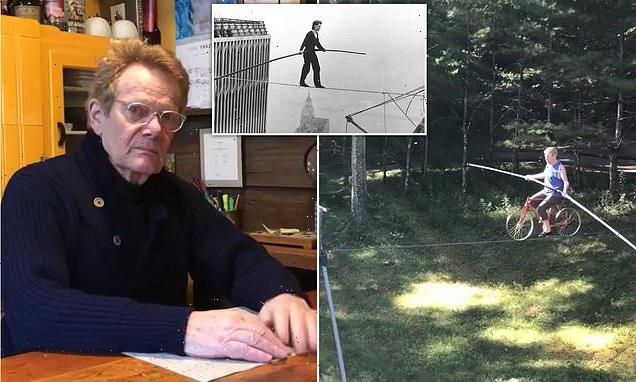 He’s still got it! Tightrope walker Philippe Petit, 73, who crossed high wire between the Twin Towers, reveals he plans to tackle a five-storey building in Washington DC

Nearly 50 years on from the stunt that propelled him to international fame, the tightrope walker Philippe Petit has hinted he is nowhere near retirement.

The Frenchman, 73, became a worldwide sensation in 1974 when he illegally crossed between the Twin Towers in New York City without any safety measures in place.

Now, his friend Keith McNally, the owner of Baltazar Restaurant – who made headlines earlier this year by saying he had banned James Corden from the establishment – has revealed Petit is planning another stunt soon.

Sharing a picture of a recent catch up with the aerialist on Instagram, McNally revealed Petit will tightrope a five story high building in Washington DC in the coming months. 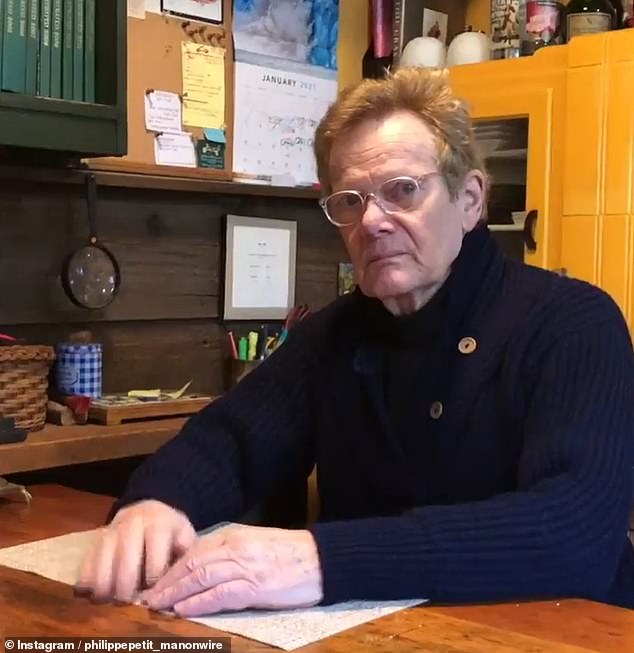 Nearly 50 years after he tightroped between the Twin Towers in 1974, the aerialist Philippe Petit, now 73, is planning to tightrope a five story high building in Washington DC in the coming months

‘Philippe’s planning another walk, 5 storeys high, in DC in a few months. I’m considering joining him on the wire,’ McNally wrote on his Instagram account.

Philippe made a name for himself defying gravity on several occasions, with his first stunt in 1971, where he tightroped between the two towers of Notre-Dame de Paris in the French capital.

And after the cathedral burned in 2019, he revealed he ‘dreamed’ of crossing between its towers once again. 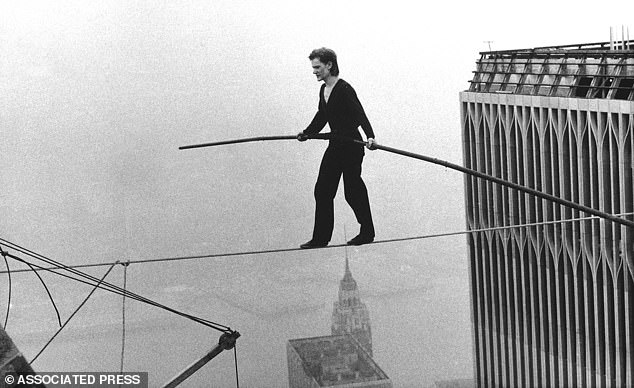 Petit gained international fame after the World Trade Centre stunt in 1974, where he crossed four times and danced on the wire, even laying flat on the steel pole

He also revealed he thought about tightroping the Petronas twin towers of Kuala Lumpur, which are 452m-high, but said he couldn’t do it without permission.

‘A guy with a ton of material, in the night, on top of a giant tower. Don’t you think they’d shoot before asking questions?

‘We live in a world that’s so paranoid about security.’ he told La Croix in the same interview. 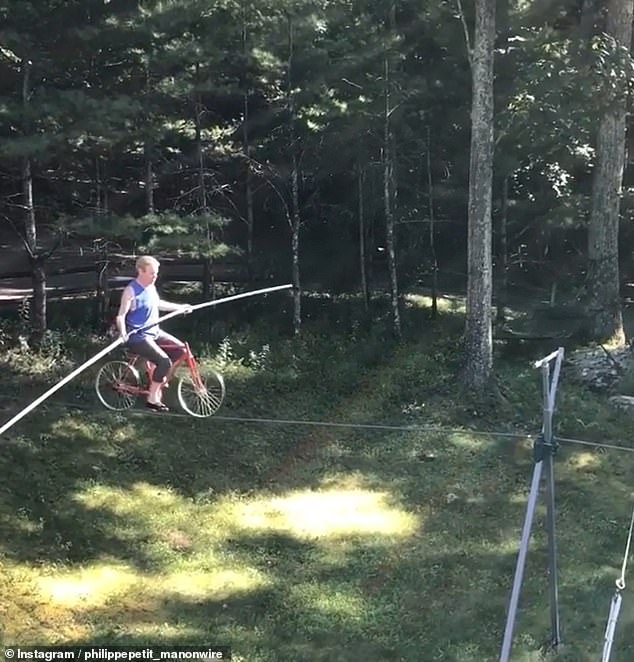 In 2020, he showed he had not lost any of his abilities, with one video showing himself riding a bicycle on a tightrope in his backyard

But it is his 1974 illegally crossing between the Twin Towers that saw him gain worldwide attention.

The artist first got the idea of crossing the towers in 1968 aged 18, when he read an article about the World Trade Centre being built in New York.

It took Petit six years and several trips to New York to plan for what he called the ‘perfect artistic crime.’

He and his team of friends and photographers took advantage of the fact that the construction of the towers wasn’t totally finished to enter the building posing as contractors and fool security. 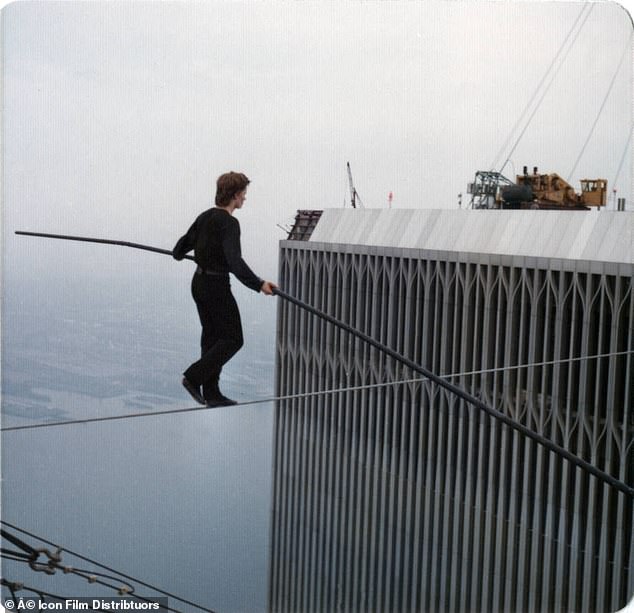 Man on Wire, which was released in 2008, tells the story of Petit’s crossing of the World Trade Centre

They used fishnets and a bow and arrow to throw the tightrope from one tower to the other, and Petit used a 61m-long pole to keep his balance during the excercise.

The stunt lasted for 45 minutes, during which Petit crossed back and forth between the Towers four times.

The New York Police Department and the New York Port Authority tried to convince him to come down from the rope, however, even they applauded once he finished the show.

While he was arrested after the stunt, the New York District Attorney dropped the charges against Petit in exchange of a series of tightrope performances for children in Central Park.

Tightroping the Twin Towers made Petit a star overnight, and the story of the crossing has been the subject of two movies, the documentary Man on Wire, in 2008 and the Hollywood retelling The Walk, with Joseph Gordon Lewitt, in 2015. 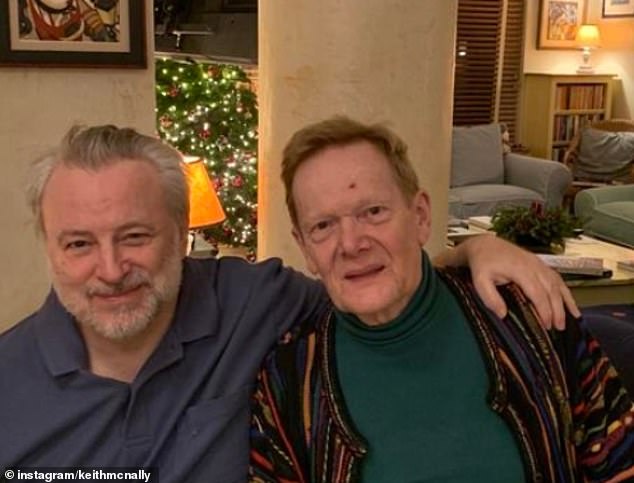 Keith McNally, who owns the Baltazar restaurant in New York, revealed the project Petit is working on in an Instagram post

The tightrope walker, whose career spans decades, is as active in his 70s as he was in his 20s.

And the artist has been keeping fit at home, where he has been training for new stunts away from the spotlight.

In 2020, he showed he had not lost any of his abilities, and shared a video of himself riding a bicycle on a tightrope in his backyard.

And in 2021, he brushed off his age by throwing away his glasses, saying he felt ‘so much better’ without them.

The last true movie star? From flying fighter jets to motorcycle jumping off a cliff, Tom Cruise has gone above and beyond to ensure his action movies remain a true spectacle – so can he ever be knocked off the throne?