Henry J. Stern, who presided over New York City’s emerald empire for 15 years as commissioner of parks and recreation under two mayors, surpassing all but the Napoleonic Robert Moses in tenure and enhancements to the city’s greenswards and playgrounds, died on Thursday at his home in Manhattan. He was 83.

Mr. Stern’s son Jared said the cause was complications of advanced Parkinson’s disease.

A brilliant, combative grandstander who clowned in costumes, kissed catfish and crawled through the seal house in Central Park to get publicity, Mr. Stern was the commissioner under Edward I. Koch from 1983 to 1990 and under Rudolph W. Giuliani from 1994 to 2002. He was also a councilman at large for Manhattan for eight years and held other municipal posts in a four-decade career.

Civic historians generally give Mr. Stern high marks for his stewardship, although his eccentricities sometimes overshadowed his accomplishments, and in his last year in office a lawsuit accused him of discriminating against thousands of black and Hispanic employees — a case that the city settled years later for $20 million and sweeping changes in the parks department’s salary and promotion practices.

As a liberal in Mr. Koch’s Democratic administration in the 1980s, Mr. Stern was a general in charge of an army of nearly 5,000 workers, commanding generous public spending for city parks. But as a centrist under the Republican Mayor Giuliani, he had to manage with 2,400 employees and struggled to meet the needs of a department increasingly reliant on private donors, volunteers and civic groups.

He also managed to add 1,600 acres of parkland, bringing the city’s total to more than 28,000. His acquisitions were second only to those of Moses, the legendary, imperious urban planner and master builder who, as the commissioner from 1934 to 1960, virtually created the department by unifying the parks of all five boroughs in one system and building hundreds of playgrounds and miles of parkways and beaches.

Without the federal funds that Moses had cadged or the big budgets of the Koch years, Mr. Stern, under Mr. Giuliani, recruited 40,000 volunteers to work in the parks, used thousands of welfare recipients to perform cleaning and maintenance tasks, and solicited millions in donations from private groups in exchange for their use of the parks. He also gave cocktail parties to encourage young professionals to make the parks their first charity, dispensing social cachet by recognizing 10,000 contributors as “members of the park family.”

Aides said he was not above dipping into capital funds for routine repairs. Still, in the Giuliani years alone, Mr. Stern put $1 billion into capital improvements, restored 2,200 acres of forest and wetlands, collected $1.5 million in restitution for damage to trees, planted 100,000 new street trees, labeled 40,000 trees with botanical and common names, and planted trees and grass in 2,000 street and highway median strips. 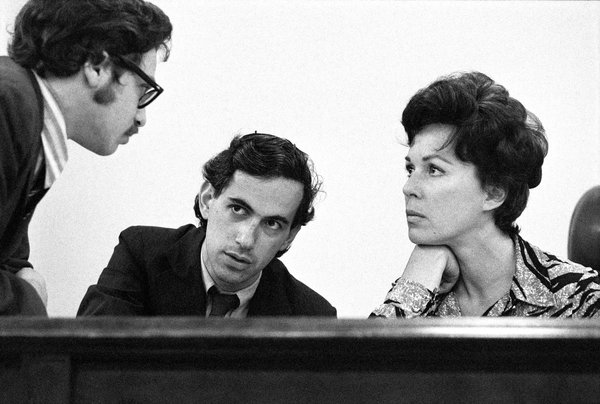 A lightning rod for controversy, Mr. Stern proposed a new crime, “arborcide,” with jail time for tree-killers and a tree victim’s compensation fund. He suggested that anyone caught littering be forced to work in the parks, with repeat offenders fined $1,000. He declared war on unleashed dogs.

None of it worked. But both Mr. Koch and Mr. Giuliani called him one of the best parks commissioners the city ever had.

Mr. Stern made headlines with panache — taking his golden retriever, Boomer, almost everywhere and leaping out of his chauffeur-driven limousine at City Hall, at his headquarters at the Arsenal in Central Park or at the scene of some stunt, in the costume of a toy soldier, a matador, an astronaut, King Neptune or a shepherd with Little Bo Peep at his side.

Like a latter-day Andy Warhol, he collected unopened cans of Campbell’s tomato soup in his Arsenal office, which was not air-conditioned. One hot summer weekend, when no one was around, 70 cans of tomato soup exploded. When the staff arrived on Monday, the office looked as if it had been attacked by terrorists.

Stories of Mr. Stern’s eccentricities were legion. He staged an elaborate funeral for a dead tree. He snacked on canned soups and peas, offering visitors tastes from his own spoon and appearing genuinely disappointed if they refused. He fell asleep during an interview with a reporter, prowled 99-cent stores and created “park names,” or “noms du parc,” for 6,000 staff members (to use for communications by walkie-talkie) and for celebrities: Starfish, Roadrunner, Turtle. He was Starquest.

Fascinated with animals, alive and sculptured, he released wood frogs, quail and screech owls in parks where they might once have lived, despite ecologists’ complaints that the original environments had to be recreated first for them to flourish.

Off duty, he sometimes drove around town gazing up, exclaiming at stone-carved animals on facades and parapets. He said he was the founding president of the American Association for the Advancement and Appreciation of Animals in Art and Architecture: the AAAAAAA.

One of New York’s most visible and colorful officials, Mr. Stern was a small, rumpled man who looked like a leprechaun, sounded like Woody Allen and said precisely what he was thinking most of the time, even if it was found to be offensive.

Coming of age in a mixed immigrant neighborhood of Upper Manhattan, Mr. Stern had a tendency to see the world in ethnic terms, colleagues said. In private, they said, he sometimes told ethnic, Jewish or anti-gay jokes and used terms that could be construed as racist, like a derogatory Yiddish word for black people.

In an interview in the mid-1990s, he acknowledged that he could be “certainly politically incorrect” and dismissed what he saw as the reflexive attitudes of liberals. “I don’t feel guilty,” he said, “because I am Jewish, white, male or heterosexual.”

Defenders noted that he had spent the summer of 1964 working for civil rights in the South, and scoffed at notions that he harbored biases.

Near the end of his years in office, however, Mr. Stern was accused in a federal class-action lawsuit of having discriminated against black and Hispanic employees in awarding jobs and setting salaries, while rewarding a handpicked coterie of less experienced white workers with plum assignments and relegating anyone who complained to lesser roles.

The city’s $20 million settlement in the case, in 2008, covered back pay, legal expenses and compensatory damages for 3,500 current and former employees. The city also agreed to new pay scales and promotion practices. But it did not admit wrongdoing, and Mayor Michael R. Bloomberg seemed eager to move on from charges that had been pending since 2001.

“We decided that it would be better to settle than to litigate,” the mayor said. “It was something that took place a long time ago, and I think we are satisfied that our procedures today in that department, and I think in all departments, do not discriminate against anybody.”

Mr. Stern denied the allegations, calling the idea of racial discrimination “repulsive” and saying that race had been taken into account in his department only under the auspices of court-ordered affirmative action. “We have never discriminated on the basis of race,” he said.

Henry Jordan Stern was born in Manhattan on May 1, 1935, one of four children of Walter and Jean (Friedlander) Stern. His father, an immigrant from Germany, manufactured tents, and his mother, who was of Russian descent, was a bookkeeper. Both were Jewish. Henry and his siblings, Susanne, Kenneth and Jerome, grew up in Inwood, then a mix of Jewish, Irish and Greek immigrants.

In public school, Henry could read and write by the time he went to kindergarten and was skipped to the third grade. He graduated from the Bronx High School of Science in 1950, from City College in 1954 and from Harvard Law School in 1957, at 22.

As a young man, he had been enthralled by the persona of the actor James Dean. When Dean died in a car crash near Cholame, Calif., in 1955, Mr. Stern went to the accident scene and brought back the intersection sign: United States Route 466 and California State Route 41.

Mr. Stern was a clerk to Justice Matthew M. Levy of the State Supreme Court from 1957 to 1961, and from 1962 to 1965 was an assistant to two Manhattan borough presidents: Edward R. Dudley, a former ambassador and civil rights activist, and Constance Baker Motley, the first black woman to become a federal judge.

He was named executive director of the city parks department by Commissioner Thomas P. F. Hoving in 1966. From 1967 to 1969, he was an assistant administrator in the city Consumer Affairs Department. Over the next four years he was an associate commissioner, then the deputy to two commissioners of consumer affairs, Bess Myerson and her successor, Betty Furness.

Mr. Stern was elected councilman at large from Manhattan in 1973, running on the Liberal Party line, and re-elected to another four-year term in 1977. In that post he led fights for noise-control and gay-rights bills and became known as a nonstop public servant, attending thousands of community, civic and planning commission meetings.

Jeffrey Sussman, who was Mr. Stern’s press secretary in 1981, recalled recently that Mr. Stern had arranged to have a site in Central Park near 72nd Street named Strawberry Fields, after the Beatles song, in honor of John Lennon after he was murdered outside his home at the nearby Dakota apartment building in 1980. Mr. Stern, he said, also created a consumer truth-in-dying regulation for the city’s funeral home industry and a regulation to protect carriage horses.

Mr. Stern, who lived on East 84th Street in Manhattan for more than 50 years, married Dr. Margaret Ewing, a pediatrician, in 1976. She and his son Jared survived him, as do another son, Dr. Kenan Stern; his sister, Susanne Bonnet; his brother Kenneth; and five grandchildren. His brother Jerome died before him.

Political observers said that Mr. Stern, who was long identified with liberal causes, drifted from left to center under Mayors Koch and Giuliani. Critics said his outlook was governed by expediency as municipal budgets were cut and programs reshaped.

While out of city government during the Democratic administration of Mayor David N. Dinkins from 1990 to 1994, Mr. Stern was president of Citizens Union of the City of New York, which monitors city government.

In 2002, he co-founded and became president of New York Civic, a Manhattan-based good-government group. In recent years he wrote hundreds of articles on public policy for the organization, sending them to thousands of subscribers. They were regularly published by The Huffington Post (now HuffPost), The Queens Tribune and other publications.

“I have remained friends with Henry throughout the years,” Mr. Sussman, his former press aide, recalled. “When he attended my wedding reception in 1984, he sold ties with the city seal to my guests. The money from the sale was donated to the city’s libraries.”