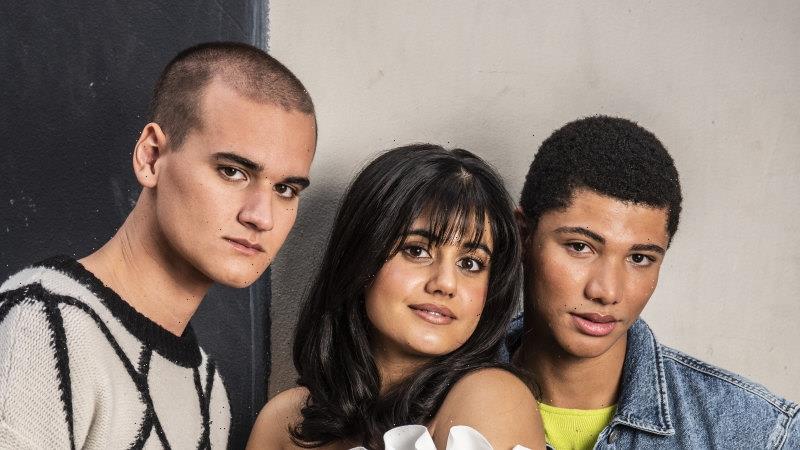 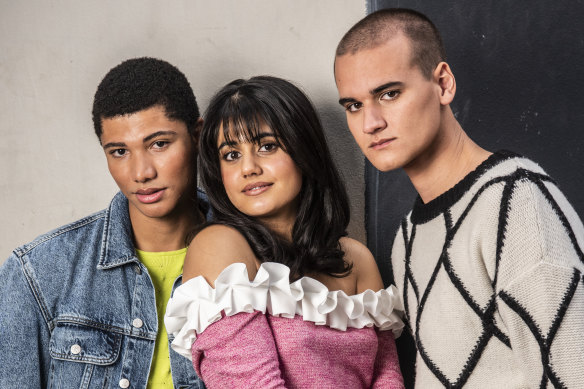 Will McDonald, Ayesha Madon and James Majoos are the three of the breakout stars in Netflix’s reboot of Heartbreak High.Credit:Steven Siewert

It’s the show that launched a thousand “rack-offs” and sent teenage girls into a spin over a bad boy with a soft heart called Drazic.

And now Heartbreak High is back; rebooted at Netflix as the US streaming giant bids to prove it doesn’t just sell shows to Australia, it makes shows here, too. And not just any show but one shouldering the memories of its original fan base of ’90s teenagers who are now in their 30s and – gasp! – 40s and are ripe for a nostalgia hit. Their expectations are high.

Just ask the reboot’s creator, Hannah Carroll Chapman. At 34, she is one of Heartbreak High’s original fans. She first watched it when she was nine or 10 and was instantly smitten. 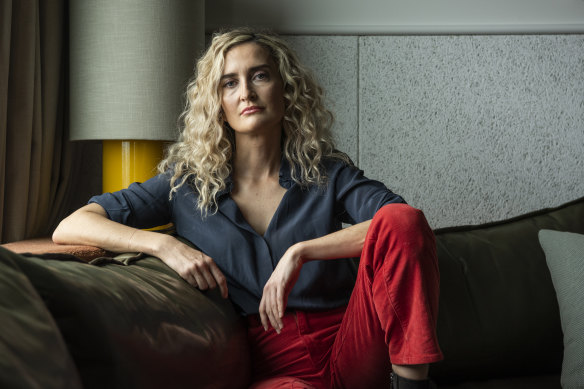 Hannah Carroll Chapman, who is the writer and creator of Netflix’s reboot of Heartbreak High.Credit:Steven Siewert

“I look back on it now and I really do feel like it was a huge cultural moment in our television history, along with stuff like Muriel’s Wedding and Strictly Ballroom. It was effortlessly cool. It wasn’t like a lot of teen shows, especially on channels like Disney and Nickelodeon. Even now, every time the theme tune comes on, I just get this huge rush of pleasure.”

Now she’s in charge of bringing the story of Hartley High and its students to a new generation of teenagers. Just don’t ask her how it’s going.

“I’ve been scared to tell people sometimes,” she says, laughing. “It’s got such a deep love from people. I’ve been kind of nervous sometimes when people ask, ‘So, what have you been up to?’ ‘Oh, nothing. Just f—ing up your memories and nostalgia, basically just stomping on it.’”

When Chapman – who has written for the ABC drama The Heights, as well as Home and Away – does summon up the courage to tell people, she often receives two responses: “Don’t f— it up,” and “Where’s Drazic?”

You don’t want to just make a show that is for the original fans. You want to give teens today the show that we had when we were young.

The first is pretty self-explanatory. Heartbreak High is loved. It was our Degrassi Junior High without the Canadian accents or Press Gang without Spike and Lynda. It started life as a play, The Heartbreak Kid, before it was turned into a 1993 film starring Claudia Karvan as the young teacher who has an affair with her Greek-Australian student, Nick, played by Alex Dimitriades.

Then, from 1994 to 1999, it was turned into appointment after-school TV. For more than 200 episodes, first on Ten and then the ABC, its frank approach to sex, drugs, relationships and high-school dramas reflected real life more than the squeaky clean storylines then served up on Neighbours and Home & Away. Its largely multicultural cast became stars and caused the kind of shopping centre hysteria that’s now a quaint relic of the 1990s. 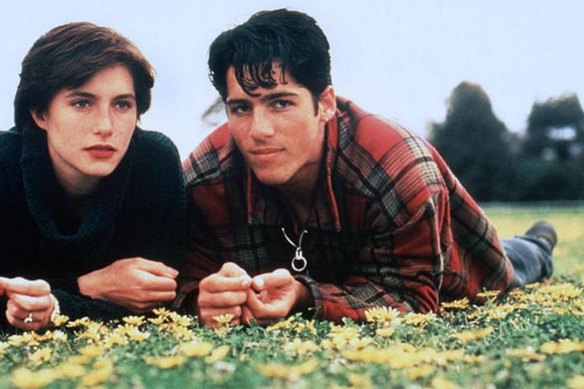 Claudia Karvan and Alex Dimitriades played a teacher and student who were having an affair in the 1993 film The Heartbreak Kid.

And there was Drazic. Hartley High’s resident bad boy – he of the eyebrow ring and dyed black hair – was like catnip to a generation of teenage girls. Played by Callan Mulvey, Drazic’s status as a breakout star lives on in Buzzfeed articles and YouTube tributes. He was, to quote. The Guardian, “Heathcliff on rollerblades”.

“Where’s Drazic?” was also one of the first questions Ayesha Madon was asked when she told her family she had scored the lead role of Amerie, the school pariah, in the reboot.

“When everyone found out, there was a lot of excitement,” says Madon. “And a lot of my older cousins were saying, ‘Oh my god, we watched Alex,’ and, ‘You better be as cool as Alex Dimitriadis.’ I’ll try. But there was also lots of, ‘Where’s Drazic?’”

The short answer to that question is that Drazic is not in it (and Alex Dimitriades is definitely not in it either, his character was killed off with a brain aneurysm at the end of series one). There is a legacy character – it’s a good one – but the reboot confidently stands on its own. 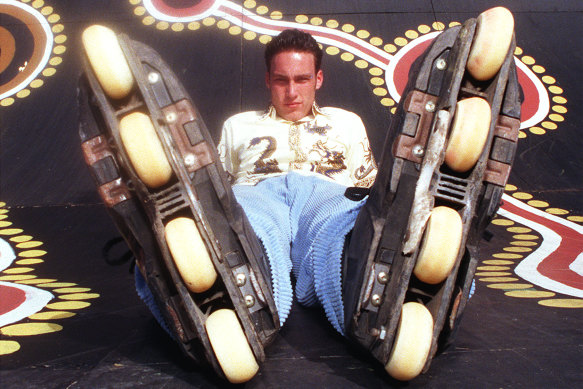 “I hope we’ve captured the spirit of [the original],” says Chapman. “But it’s certainly a show for young people. When we started, I was like, ‘I want a million legacy characters in there.’ But I think the problem with that is that you don’t want to just make a show that is for the original fans. You want to give teens today the show that we had when we were young.”

That energy is thanks to its cast, who were all born after the original aired. Madon shines as Amerie, who finds solace with two other outsiders – Darren and Quinni – after she busts up with her best friend Harper and is ostracised by everyone else for putting together a sex map in the stairwell.

“She’s a beautiful disaster,” says Madon, who is 23. “Amerie is a weirdly accurate reflection of how cringe puberty is and how clumsy it is. I really admire her because she’s so unapologetically herself. And that’s a big thing that I struggled with in high school, trying to be cool or trying to be a certain way.

“And Amerie definitely does have an element of wanting to fit in but what I love about her is she’s not afraid to be big and be bold and fall on her face to get what she wants.” 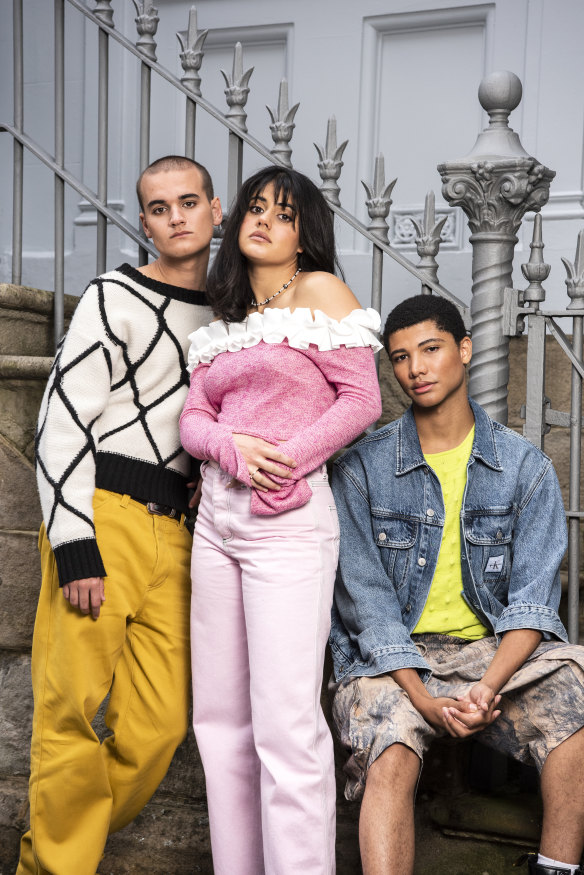 James Majoos plays Darren, a flamboyant queer kid who seems to float above the Hartley High nonsense, scooping up Amerie as she is rejected by everyone else. Darren also cares for Quinni and tells the girls, “You’ve just got to strut out there and own your shit.”

“On paper, Darren is a non-binary teen,” says Majoos, who also identifies as non-binary. “They attend Hartley High and they’re a reject, but I struggle to answer who Darren is because Darren is still discovering who they are.

The character of Ca$h is going to sneak up on people in a really great way. He holds a special place in my heart.

“And that’s been so beautiful to play and step into that queer coming-of-age [role]. Darren has a line in episode one, where they say, ‘I’m focusing on making less and less sense.’ That really encapsulates who Darren is as a young person. They’re a rebel and they move through the world with a sort of bravado, [a mix] of confidence and sass. But deep down, they’re very vulnerable. They just want to be loved, like all young people.”

The quietest character at Hartley High, at least initially, is Ca$h (yes, that’s a dollar sign). He sells drugs and barely utters more than two lines in the first couple of episodes but by episode three a fuller picture is revealed.

Ca$h is played by Will McDonald, 23, who starred for several years on Home and Away. “I think the biggest crime we had was graffiti on the surf club,” he says.

“He’s very reserved and very quiet,” says McDonald. “And I love that we take our time and peel back his layers and see what he’s about. And the fact that I got to really sit in that reserve of sadness and quietness he has, at the start of the shoot, and then go to this completely different place at the end, was really great. He surprised me a lot.”

Chapman agrees. “The character of Ca$h is going to sneak up on people in a really great way. He holds a special place in my heart because I grew up with those kind of eshay boys.”

“It’s basically a kind of Australian subculture of predominantly boys who wear a particular uniform – a tracksuit, the necklace, the Nike TNs. They hang around train stations, they roll people,” says Chapman, laughing. “I remember the Daily Telegraph went through a phase a few years ago, just being like, ‘They’re the biggest danger to society,’ and then COVID came along …”

Eshays aside (Chapman named a few of them after boys she went to school with), to get into the heads of today’s high schoolers, the show’s writers held workshops with teenagers across Sydney, while Chapman turned to her teen siblings and their friends. They told her everything.

“I was on text chats with their friends, they would send me pictures of their diaries, and I was like, ‘I don’t think I need to read this,’ or, ‘I’m sorry that happened to you,’ or, ‘Well done,’” says Chapman. “But the great thing about it was that they wanted to talk about their lives.” 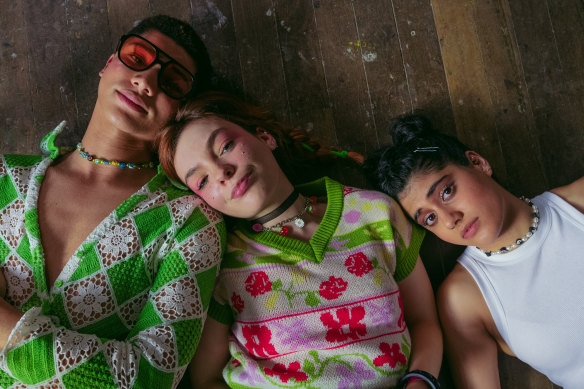 It was out of these conversations that Chapman discovered the “incest map” that’s the catalyst for many of the events in Heartbreak High. Painted on a wall, it tracks every hook-up under labels such as “dirty thumb”, “sneaky peaky” and, well, you can guess the rest. It sounds made up but it’s not.

“That came out of a conversation with my little sister, who was in year 12 at the time,” recalls Chapman. “And we’d had this long conversation about everything and then I said, ‘Is there anything else?’ And she was like, ‘Oh, there is the incest map.’ And I was like, ‘Send it to me right now.’

“It was incredible. It was this big map that they had all drawn with this filthy code on the side of a bunch of stuff that I didn’t even know existed. 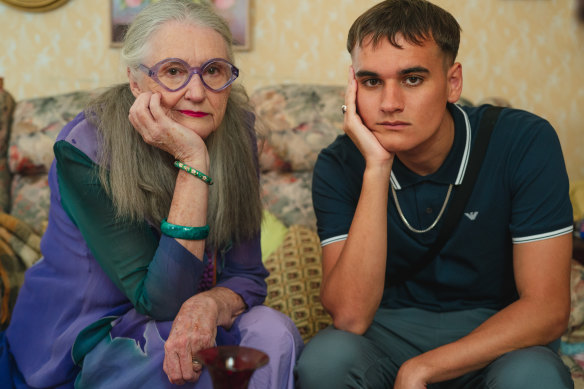 Maggie Dence as Nan and Will McDonald as Ca$h.Credit:Mark Rogers/Netflix

“And they were proud of it. It wasn’t a shameful teasing thing. I mean, there were probably a few people on the map who were like, ‘Thanks, I don’t need to be here,’ but it was just a celebratory thing.”

(If all that sounds a little shocking, consider that a major plot point of the original play and film was an affair between a young teacher and her student and the TV series contained multiple teacher-student relationships. Try putting that on screen in a light-hearted manner today.)

Madon, McDonald and Majoos all agree the new Heartbreak High feels like an accurate reflection of what teenagers get up to today, more accurate than anything they watched growing up.

“If I’m going to be perfectly candid, Australia has been a little bit behind the eight-ball in terms of diversity,” says Madon. “I know I’m yapping on about the same shit we always hear – diversity and this and that – but Australia is such a multicultural country and we’re so influenced by US TV and UK TV that we never actually get a fully nuanced Australian school experience.

“It’s either this fake representation of what Australian culture is or it’s a completely American thing. So, it’s nice that we get something that’s cool and genuinely what an Australian experience would be. I don’t think we’ve had that since the first Heartbreak High.”