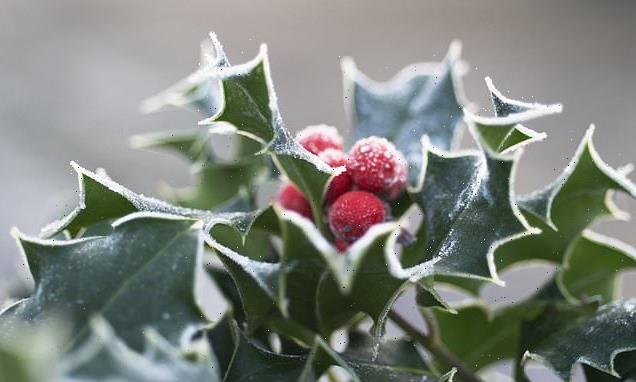 Happy Holly Holidays! They’re famous over the festivities but bring cheer at any time of year

Christmas wouldn’t be Christmas without holly. We deck the halls with its prickly bows and use it in wreaths and table centrepieces.

I used to shove a holly twig into our hot, steaming Christmas pudding. As it caught fire, from the brandy flambe, the children would shriek with delight.

Soon after New Year’s Day, holly tends to be forgotten. That’s a shame, especially for such a versatile plant group. Hollies are excellent for hedging. They also bring winter greenness to a shrubbery and can become magnificent trees.

What’s more, hollies react well to almost every kind of pruning. You can clip them annually, to create a dense, burglar-proof hedge. Trees are easy to control with occasional trimming. Given enough space, a naturally grown holly tree becomes a superb feature. If it’s a heavy-cropping female, the scarlet berries are set off by the dark, glossy leaves. 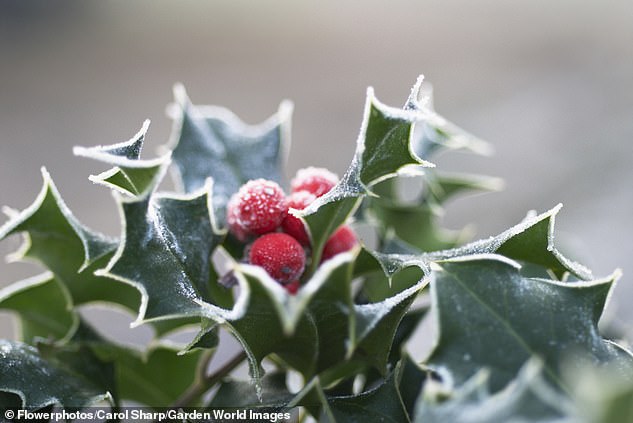 Christmas favourite: Ilex aquifolium is handy for decoration due to its many berries. Stock image used

With more than 500 species, hollies come in a range of sizes, shapes and colours. Some are deciduous — though most are evergreen. Some are prickle-free, others moderately spiky and a few are botanical hedgehogs.

Britain’s wild holly, Ilex aquifolium, is my favourite. In Norfolk where I lived as boy, hollies flourished in the light, sandy soils.

Berry yields were always heavy, the intense colour contrasting beautifully with the leaves.

Canary holly, I. perado, is an unremarkable, dogsbody shrub. But if crossed with I. aquifolium, the progeny is a horse of a different colour.

Equally daft, a berryless male with pale cream leaf margins was named I. aquifolium Silver Queen. I prefer heavily berried I. Argentea-marginata. That has prickles and pale cream leaf margins, too. Other females with variegated leaves include Golden Milkboy, Handsworth New Silver and the superb yellow and green Madame Briot. They’re easy to keep to almost any size or shape.

To bear berries, female hollies need a male nearby for pollination. The flowers on both sexes are tiny but essential.

The male should therefore be attractive. Choices include silvervariegated ‘hedgehog’ holly, I. aquifolium Ferox-Argentea. It flowers copiously and has attractive, extra-prickly leaves.

To thrive, hollies prefer lightto-medium soils which drain well. Berries are more abundant when hollies get plenty of light.

Young holly plants are more vulnerable. If set back — by drought, or being smothered by other plants — they can sulk for years. So water during dry spells and keep weeds at bay. This is important with newly planted hedges. To avoid root disturbance, support each holly with a cane and water regularly.