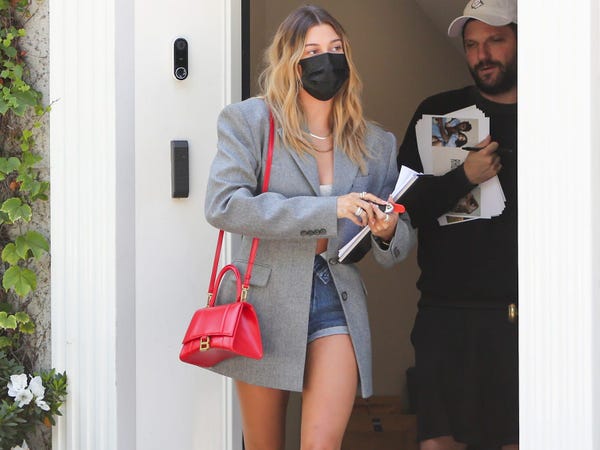 Hailey Bieber (neé Baldwin) made a splash in a pair of chunky Bottega Veneta boots when she stepped out for a meeting in Los Angeles, California, on Wednesday.

The model mixed summer and fall wardrobe staples, wearing an oversized gray blazer over a thin, white bralette and an unbuttoned pair of denim of shorts designed by Alexander Wang. Though the latter garment is currently sold out, similar styles are available on the designer's website.

Bieber's plum ankle boots with vibrant red soles took all the attention from the rest of her outfit, though.

The exact boots worn by Bieber are not available to buy at the time of writing, though the same, chunky shoes in different colorways can be purchased for $1,150.

Bieber matched the statement boots with a red, $1,850 Balenciaga purse, and accessorized with two necklaces, layers of silver rings, and a black face mask.

Last fall, celebrities couldn't get enough of heeled flip flops, which have fallen in and out of style since the early 2000s.

Clear shoes made from PVC plastic were also popular in 2019. Members of the Kardashian-Jenner family, including Kylie Jenner and Kim Kardashian West, were often photographed wearing the footwear style.

The resurgence of "dad sneakers," or chunky trainers that were popular in men's fashion in the '90s and early 2000s, came earlier in 2018. Not only did the trend continue into the following year, but "ugly" sneakers are still prominent today.

Earlier this August, for example, Kanye West unveiled a Yeezy sneaker design that some have compared to spaghetti noodles and fish skeletons.