GW Bot’s engagement with her immediate and wider environment(s) has resulted in an ongoing visual expression that is personally intense, thematically important and aesthetically beautiful. This exhibition powerfully exemplifies these qualities and the experiencing of it will remain a significant pleasure for viewers. 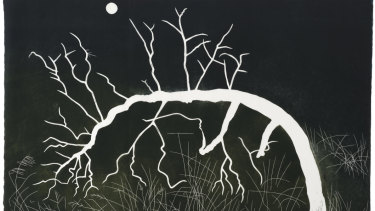 The 17 works (variously prints, oils, watercolour and bronze, steel and glass sculpture) trace the artist’s journeys (real and metaphorical, corporeal and spiritual) through her environment and her self.

Bent glyph – homage to Corot (Cat.1) reveals the strength of the artist’s controlled use of a limited (yet nuanced) palette. Essentially Bot employs a symphonic coalescence of rich green and deep blue-black as “background” for the grandiloquent gesture of the startlingly white bent glyph of the work’s title.

The glyph dominates the spatial configuration both because of its “whiteness” and its position as the central and dominating motif. The graceful flow of the bent trunk imbues a feeling of resigned acceptance, a poignancy used to great effect by the artist. The artist’s signature language – glyphs – not only points to an autobiographical presence but provides a unifying element to all her work.

Here tree as glyph is given a chorus of finely delineated glyphs that move across the front of the picture plane in a staccato dance that enlivens both frontal and deep space. The inclusion of the mute sentinel of the moon (also in white) symbolises concurrently the temporal changes of the natural world and the moon (“nature”) as eternal witness. This is a marvellous work. 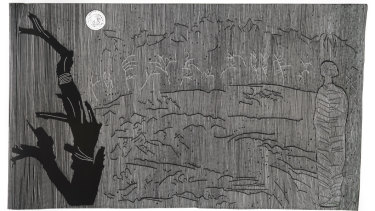 Bot’s use of black-and-white is especially astute. She demonstrates this beautifully in Glyphs – Mother and child 1 (Cat.2). The consummate control demonstrated in the artist’s use of linear patterning (as in the “background curtain of densely packed vertical lines) is visually and thematically exquisitely intense. This curtain contrasts with the horizontally layered bands of black glyphs.

These are embedded into the pictorial surface and indicate a range of topographies and the various formal spatial layers in the work. Bot capitalises on the tonal variations of black and white to instil a sense of the continuity of the natural world. These variations give a sense of the inexorable yet often hidden journeys of the natural world and of the underlying and continuous cycles that characterise that world.

For her, these are also simultaneously metaphors for her own continuing creative possibilities. At the left-hand edge the dense blackness of the large glyph contrasts with the outlined figure of the glyph-filled mother, enshrouded and looking into the landscape, a pose that increases the sense of the infinite depth of the spatial configuration of Bot’s image and by extension the infinity of nature. The ubiquitous moon watches over all this. 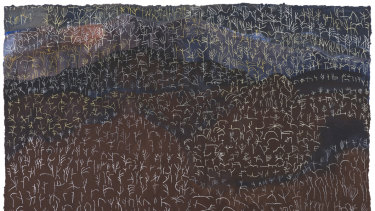 An equally attractive vision is seen in Lake Mungo Glyphs – mother and child and the Garden of Eden (Cat. 13).

Glyphs – Murrumbidgee River (Cat. 3) is visually, thematically and philosophically an extraordinarily rich image. Its finely tuned composition is a wonderful evocation of the internal rhythms of the land. The fluid pictorial space moves in undulating waves through and into the picture plane where individual pictorial and tonal identities are celebrated.

Each of these, however, merges into the other in ways that allude to the topographical relationships that animate and give character to the land as viewed and as lived. The subtle and nuanced use of blue combined with the predominance of brown earth shades provide a fecund platform for the massed glyphs luxuriating over the surface in a display of visual and thematic richness. Bot’s landscapes of possibilities are given celebratory expression in this beautiful image.

Another image of the sweeping grandeur of the land is Moonah glyphs (Cat. 8). This is a visual tour de force not just because of its scale (105 x 200cm) and pictorial opulence but because of the profundity of its metaphorical and allusive inclusions. The image is divided into receding horizontal topographic swathes that command the pictorial surface and spatial configuration of the work.

The triangle of blue sky in the top left-hand corner contrasts with the green and ochre earth tones that constitute the majority of the image. The top left-hand edge of the terrestrial entity is curved, imitating the curve of the earth. The space behind that edge, overseen again by the ubiquitous sun/moon is deeply recessive pushing back into the infinity that is the natural world.

This space and its evocation of the infinite and continuing cyclical character of nature is here presented as a poem of possibilities, quietly but nevertheless overtly present. As in Cat. 3, the energetic terpsichorean appearance of the chorus of glyphs adds movement and moves the viewer through this stately and magisterial image. 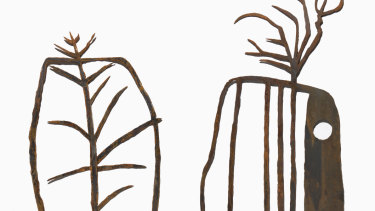 There are a number of sculptures in the exhibition. Glyphs – bush portrait (Cat. 9) is a splendid work, proudly totemic in appearance and a perfect homage to the floral and arboreal denizens of the Australian bush. The use of rusted steel is particularly moot to the subject-matter and to Bot’s overall approach to her theme. The rusted surfaces speak of time passing but also allude to evidence of human and natural activity over time. The lateral arrangement of each of the components reinforces their totemic character.

Each is given its own visual identity and this is underscored by their very graphic presentation. Like a word or a letter they are aspects of Bot’s glyphic vocabulary. This vocabulary, like the natural world which is its source, is open-ended and splendidly allusive. Here the stark simplicity of the individual forms and these in combination belies the complex world they so elegantly portray.

Smaller sculpture such as Glyphs – the paddock 1 (Cat. 14) and Glyphs – the paddock (Cat. 15) the central space is enclosed but activated by the sprouting glyph in one, and the glyph in combination with the grouped vertical lines in the other. The ostensibly simple presentation of these works (and Cat’s 6 and 7) with their clean, clear lines and open spatial delineation allow for immediate viewer interpolation and dialogue with the artist’s landscape.

There is much more in this exhibition than cannot be dealt with in the present context. It is an important event in the visual arts calendar. It would be remiss of me not to state that I have worked in other capacities with this artist a number of times. The calibre of this beautiful exhibition reinforces my ongoing commitment to GW Bot and her embracingly incisive and seductive aesthetic and intellectual creations.