A heartbroken mum has described how she was so overwhelmed with grief that she had to be held back from bringing her dead son home.

Devastated Claire Jones, 32, from Blackburn, Lancashire, had found a spade and was determined to ‘bring back’ her baby son, Charlie, who died from sepsis, by digging up his body.

But in the following weeks as her grief threatened to overcome her, Claire discovered she was pregnant.

One year on she gave birth to a healthy baby girl, Isabella – who she says is a gift from Charlie. 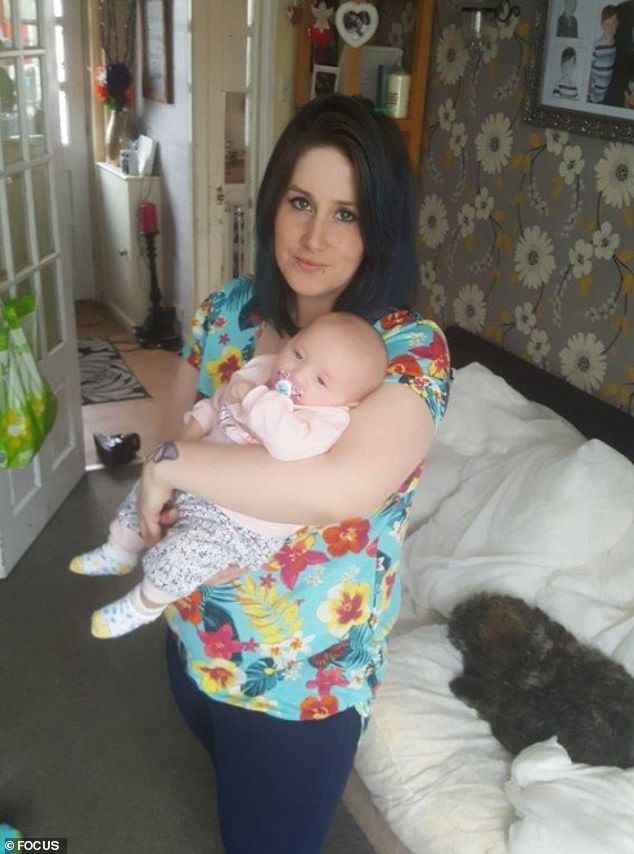 Claire Jones, 32, from Blackburn,Lancashire, believes her baby daughter Isabella is a gift from her late son Charlie 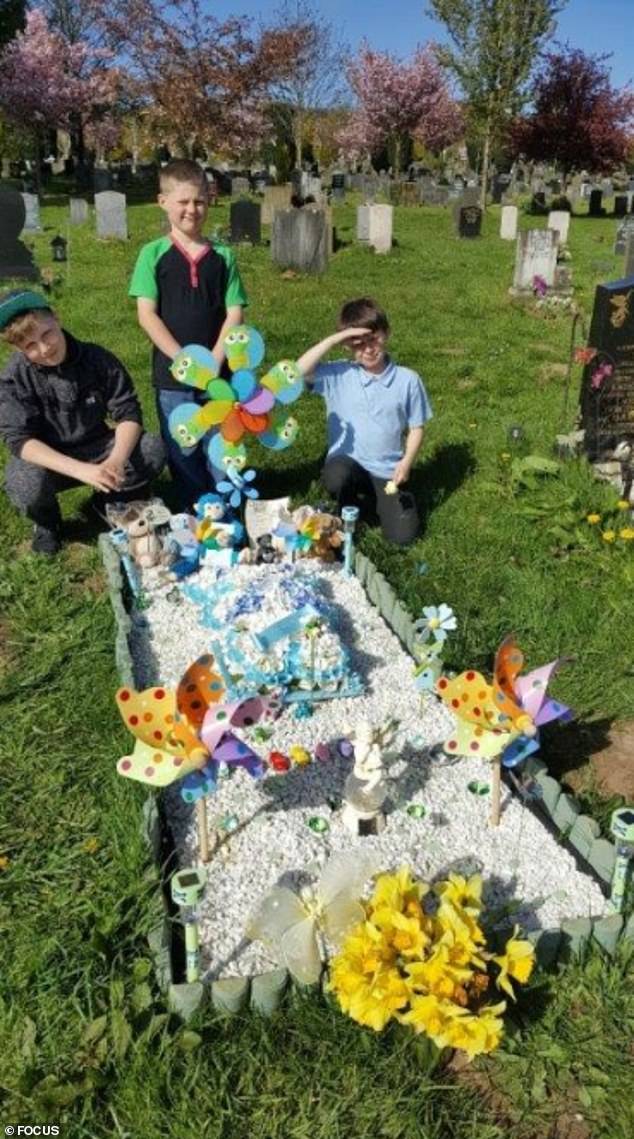 Claire said: ‘I really struggled to cope after the funeral; I hated the idea of Charlie being buried outside and I just wanted to bring him home, warm and safe, with my other children.

‘Falling pregnant really did save my life; it made me pull myself together.

‘Of course Isabella will never replace Charlie. But I do believe that she is a gift from him – sent to make us all smile again.’

Claire and her partner, Barry, 40, met in March 2015. She was already mum to three boys from a previous relationship. 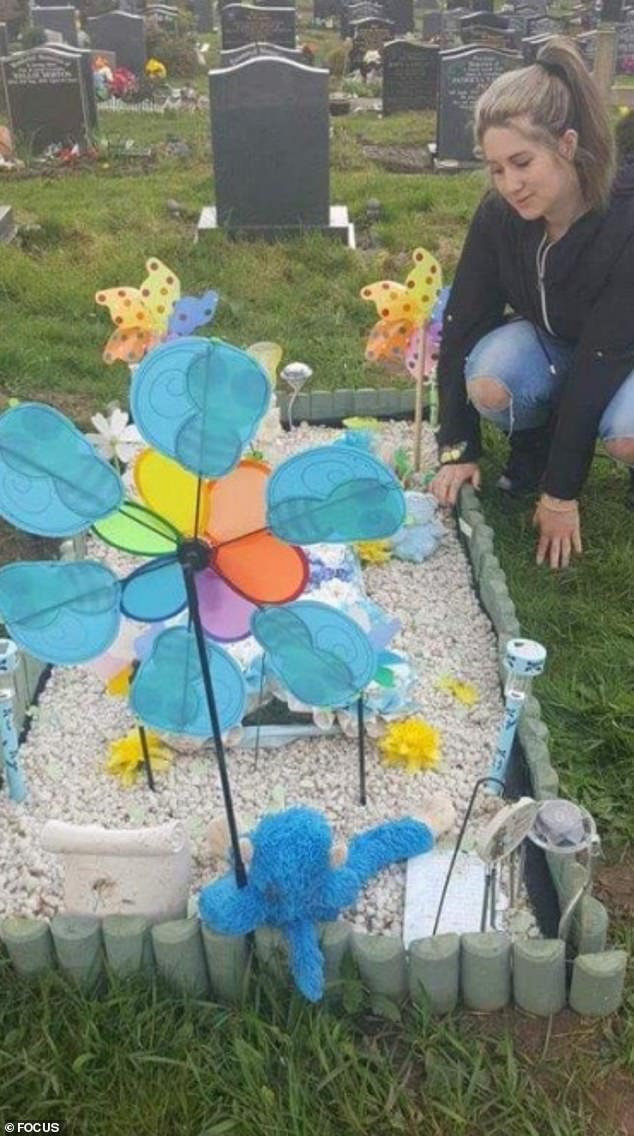 Claire managed to get through the funeral and the wake, where they had a balloon release. But two days later, she was overcome with grief

The following year, she fell pregnant with their first baby together.

Claire said: ‘It was a surprise but we were pleased. We bought all sorts of equipment and baby clothes. I even had a pile of new nappies, waiting, in the nursery.

‘We had decided to name him Charlie.’

But at 26 weeks, Claire began losing fluid and she went to hospital, fearing her waters had broken. She was given antibiotics and sent home. 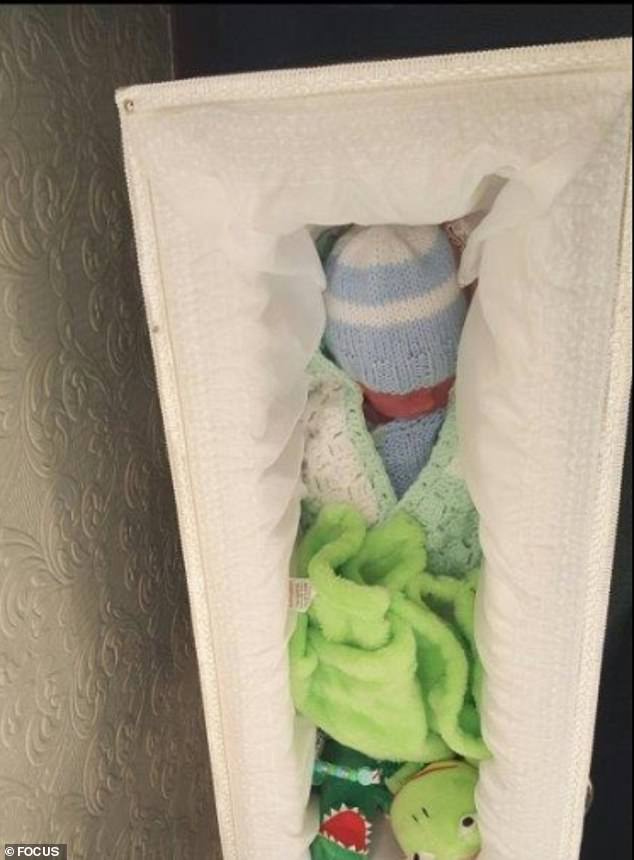 Claire said that it felt like her ‘world’ was falling apart and she was  determined to somehow ‘bring back’ her baby son, pictured after he died 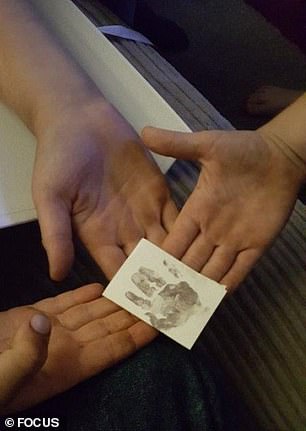 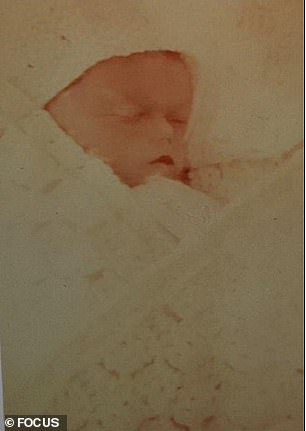 The family are pictured holding the baby’s hand print (left). They were able to spend time with Charlie after he died, thanks to a cold cot

Two weeks on, Claire noticed the baby was moving less and she felt unwell. She went to hospital where a scan showed there was no heartbeat.

‘I knew, instinctively, before I went to hospital, that I had lost him. I could just feel it. I was feverish and felt sick. And I had a terrible sense of doom,’ Claire recalled.

Claire was diagnosed with sepsis, which had been passed on from her baby. She delivered her son, still-born, on February 9 2017.

‘Charlie was pink and he looked so healthy,’ she said. ‘I had been afraid of seeing him but the moment he was born, I wanted to cuddle him. I never wanted to let him go.’

She said: ‘My sons and all our family and friends visited to say their goodbyes. Charlie was in a cold cot.

Sepsis occurs when the body reacts to an infection by attacking its own organs and tissues.

Some 44,000 people die from sepsis every year in the UK. Worldwide, someone dies from the condition every 3.5 seconds.

Sepsis has similar symptoms to flu, gastroenteritis and a chest infection.

Symptoms in children are:

Under fives may be vomiting repeatedly, not feeding or not urinating for 12 hours.

Anyone can develop sepsis but it is most common in people who have recently had surgery, have a urinary catheter or have stayed in hospital for a long time.

Other at-risk people include those with weak immune systems, chemotherapy patients, pregnant women, the elderly and the very young.

Treatment varies depending on the site of the infection but involves antibiotics, IV fluids and oxygen, if necessary.

‘My sons sobbed when they realised the baby brother they had been looking forward to meeting was never going to come home. It was so sad.

‘I was on drips, being treated for sepsis. But I didn’t care about myself. I just wanted to be with my son.’

For Charlie’s funeral, his brother, Reece, six, wrote a poem which he read himself.

‘He was so brave. I was incredibly proud of him,’ Claire revealed.

Claire managed to get through the funeral and the wake, where they had a balloon release. But two days later, she was overcome with grief. For Charlie’s funeral, his brother, Reece, six, wrote a poem which he read himself 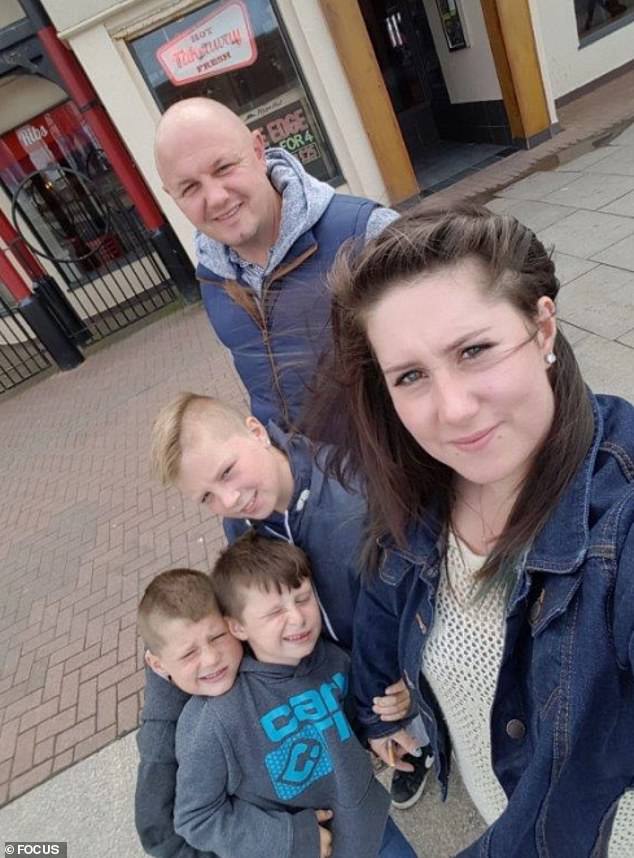 Claire with her family: She said that her sons and all their family and friends visited to say their goodbyes to the baby

‘I became determined to dig him up and bring him home to put him in his cot.

‘I even got a spade ready, and I was about to go to the cemetery. Barry had to talk me out of it and calm me down. It was awful for him too, I must have scared him.

‘He persuaded me to leave Charlie resting, in his grave and pleaded with me to concentrate on the children we already had.’

Claire had bereavement counselling but still struggled with her grief. She could not sleep or eat and began drinking heavily.

But three months after Charlie’s death, she fell pregnant again.

Claire said: ‘I felt that this baby was a gift from Charlie; this was his way of helping me to cope. Now, with a baby on the way, I had to be strong. 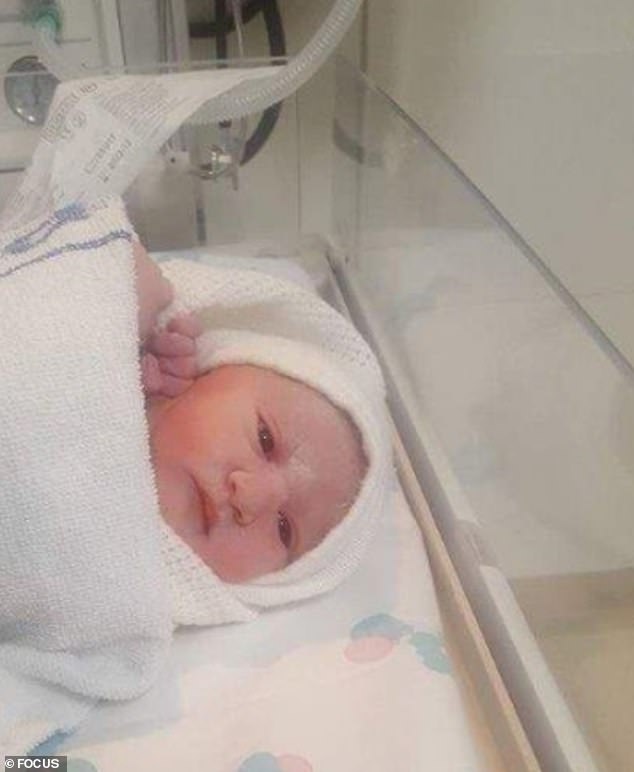 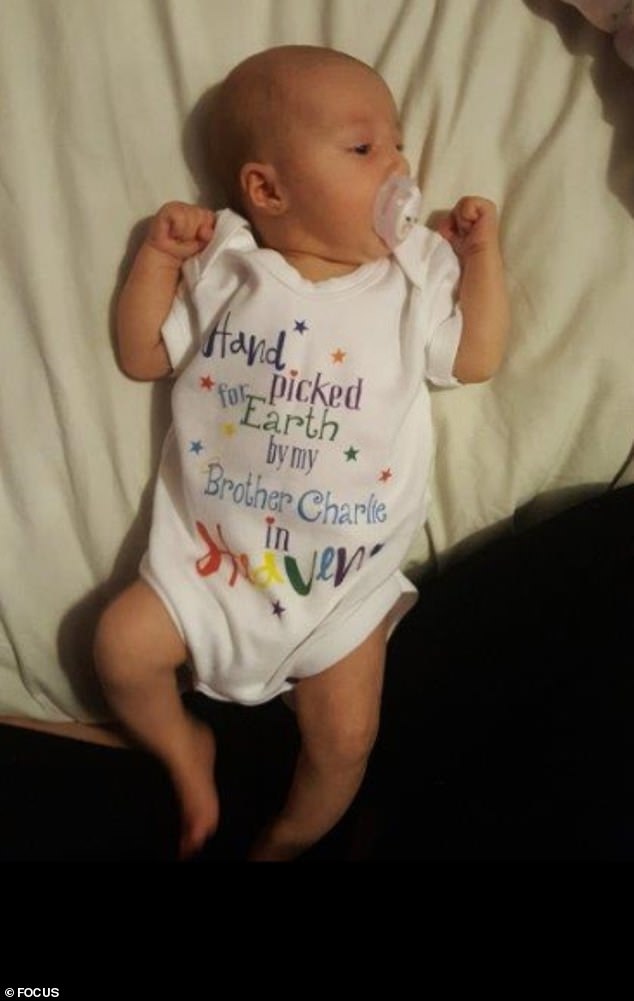 Doctors induced Claire three weeks early, to ease her concerns. She was perfectly healthy, weighing in at 5lbs. 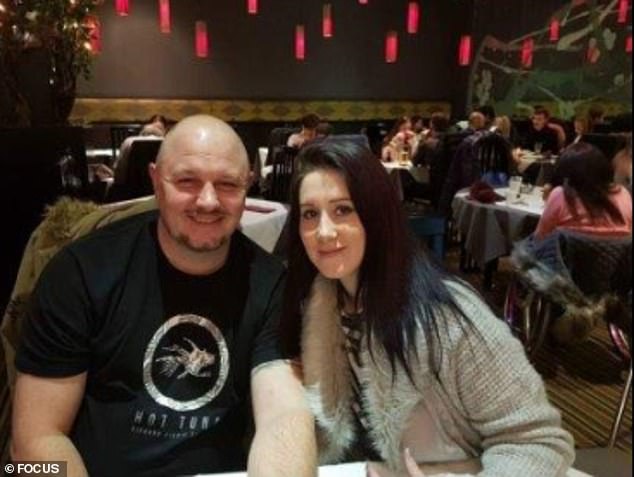 Claire believes Isabella is a gift from above – ‘sent to make us all smile again.’

‘The pregnancy was stressful, because I worried so much about the baby. But I could feel, too, that Charlie was looking down on me and keeping this new baby safe.’

Doctors induced Claire three weeks early, to ease her concerns. She was perfectly healthy, weighing in at 5lbs.

Claire says: ‘Of course Isabella will never replace Charlie. But every time I look at her, I think of him. And I do believe that she is a gift from above – sent to make us all smile again.’