Spoilers ahead for Crazy Ex-Girlfriend Season 4, Episode 8 Greg is officially back on Crazy Ex-Girlfriend… well, kind of. In the CW show’s fall finale, his class is having their 10-year reunion (even though it’s been 12 years), so Rebecca’s former paramour returns from Atlanta to West Covina. She’s understandably nervous about seeing Greg, since not only did she sleep with his dad back in Season 3, but he doesn’t know about it. However, when she finally sees him at Home Base, it’s almost like he’s a completely different person. Greg’s return on Crazy Ex-Girlfriend signifies a huge change for both characters — and not just in appearance.

Even though Rebecca’s started to redevelop feelings for both Nathaniel and Josh (Vincent Rodriguez III), Valencia (Gabrielle Ruiz) and Heather (Vella Lovell) tell her that they think Greg is her "meant-to-be." Incredulous, she reminds them how toxic their relationship was. After all, Rebecca’s not even sure he thought she was pretty. "The only way Greg would ever be my meant-to-be is if we were in some sort of sci-fi, weird, parallel, alternate universe where he was just a completely different person," she says. As if that would ever happen, right? Enter the new-and-improved Greg, played by none other than Pitch Perfect‘s Skylar Astin, rather than original star Santino Fontana. 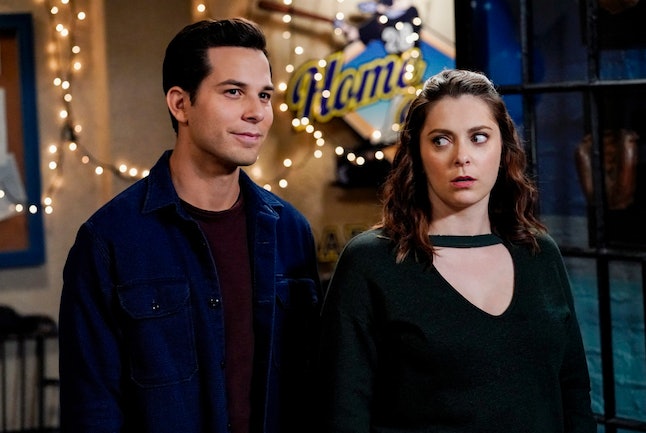 Crazy Ex is clearly in on the joke, and when Heather and Valencia point him out in the bar, Rebecca exclaims, "That’s not Greg — that’s a completely different person!" And his looks aren’t the only thing that’s changed. The former sad sack has clearly been working on himself. Not only is he still in both recovery and business school, but he asks Rebecca if they can start over. She’s quick to agree, since she’s still feeling guilty for, you know, boinking his dad and all.

Furthermore, it looks like Greg is going to be in West Covina for a while. "I’m actually sticking around for the rest of the series…of holidays," he tells Hector (Erick Lopez), their former class president. "Thanksgiving, Christmas, New Years, and the finale — Valentine’s Day." His friend responds, "I guess that is the logical end of our series…of holidays." Oh, Crazy Ex-Girlfriend. Never change.

Josh, meanwhile, is excited to reclaim his status as prom king. But Hector drops a truth bomb on him, saying that White Josh (David Hull) was the real winner. However, he thought being prom king was cheesy and gave it to Chan, who was the runner-up. Josh also learns from Rebecca’s former co-worker, George (Danny Jolles), that while he was busy doing sports, the unpopular kids were getting to third base, uncovering local embezzlement scandals, and participating in super hot massage circles. "God, I missed so much in high school," Josh exclaims. 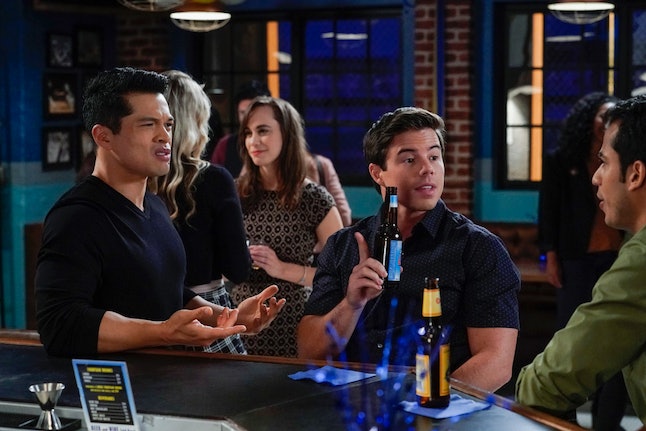 Speaking of perspective, Valencia receives some needed context, too. Heather learns that the event planner (who is also back from New York for the rest of the series…of holidays), cheated on Josh with someone back in high school. Well, Valencia doesn’t as much say this as much as make vague facial expressions that Heather interprets, and while she gets most of it dead-on, some things are lost in translation. However, her mystery lover turns out to be none other than Father Brah (Rene Gube).

As it turns out, Valencia left a note in his letterman jacket during senior year saying that she chose him over Josh and to meet her at the bleachers. Except he never showed, and she’s spent the past 12 years thinking he rejected her. However, when Hector announces that he’s kept their lost-and-found items since senior year, she sees Brah’s jacket in the pile. "I drove him into the arms of Jesus!" Valencia gasps, thinking her silence was the reason he joined the clergy.

After Brah finally reads Valencia’s note, they begin talking, and it’s clear that they still have feelings for each other. However, Father Brah points out that they’re both in serious relationships (his being with God). And while it’s sad thinking about what might have been, they’re both happy with how their lives turned out, and to, at long last, receive closure. 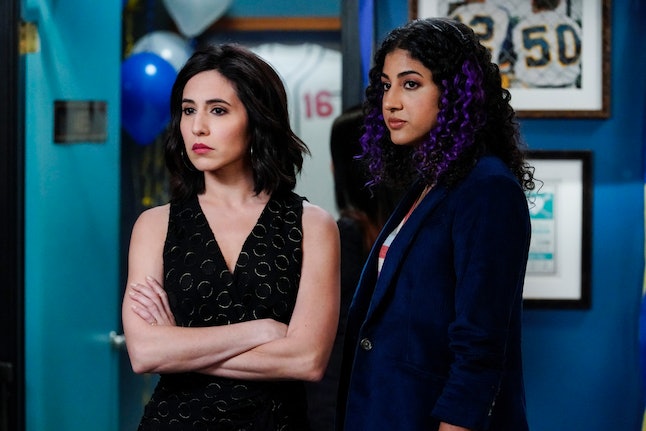 Speaking of closure, Rebecca finally works up the courage to come clean to Greg, and though he’s clearly upset, he handles it like a champ. "You think I’ve changed," he says. "Maybe we both have." You know what that is? It’s growth.

Class reunions can bring out both the best and worst sides of people. And while it can be exciting to see old friends, these situations can also be stressful, as you’re suddenly hyper-aware of how much you’ve changed (or haven’t, in Josh’s case). It can also be tempting to fall back into old patterns, since the dynamics feel so familiar — for better or worse. For that reason, it’s important that Valencia and Brah have a mature conversation, are honest with each other, but don’t do anything they’ll regret later.

As for Josh, he’s been on a path of self-discovery for awhile, and that he’s becoming aware of the people around him is pretty huge — even if it takes a Gwen Stefani-inspired number to hammer it home. And now that Rebecca’s told Greg everything, they can finally start fresh — not that they necessarily should, but they could if they wanted to. Greg’s return certainly muddies the water in terms of who Rebecca will end up with — if anyone at all.