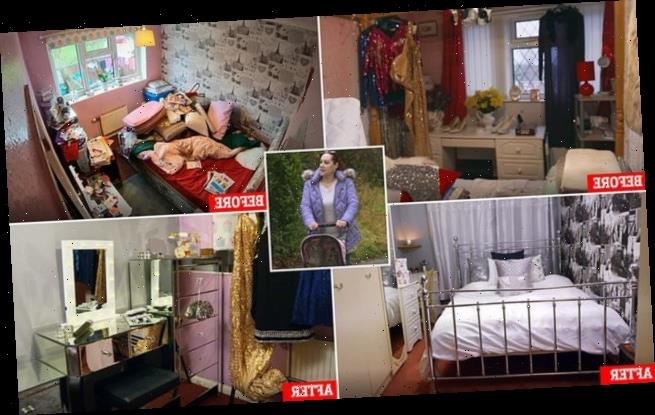 Grandmother’s cluttered home that was covered in dog hair, fleas and dead woodlice is unrecognisable after a three-day makeover on Filthy House SOS

A grandmother who refused to let her family visit her because she was ’embarrassed’ by her dirty, cluttered home has revealed the immaculate makeover it underwent during the new episode of Filthy House SOS.

Master cleaners Brennan and Richard travel to Owestry, Shropshire, to meet with Charmaine, 59, on the show’s new series, which starts tomorrow night at 9pm on 5Star.

Charmaine, who lives alone in a three bedroom house with her two Chihuahuas, admits she had to keep her family, including her granddaughter, at a distance due to her grime-filled flat, which she mostly hasn’t cleaned in ten years.

During the clean up, Brennan and Richard are confronted with the horror of the house which is ‘filled to the brim’ with piles of old magazine, dog hair, fleas and dead woodlice. 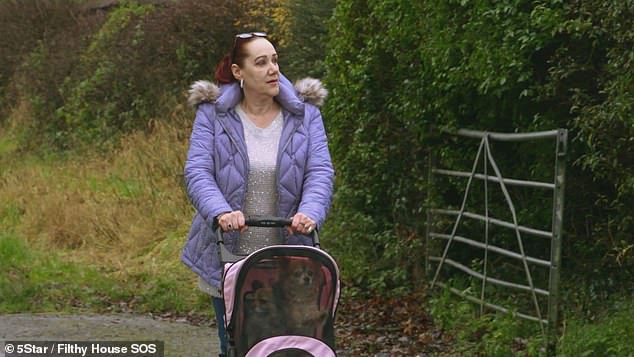 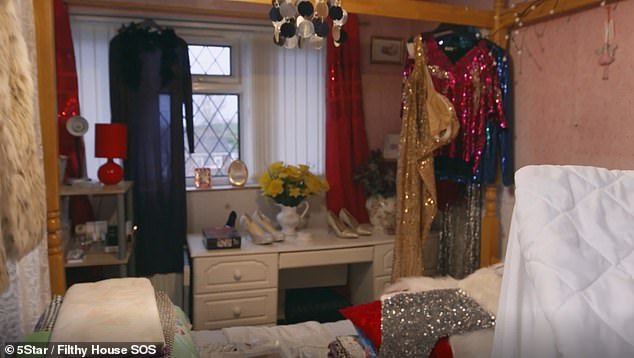 Before the makeover, (pictured) Charmaine’s bedroom is full of clothes and magazines that are years old, and her bed took up too much space 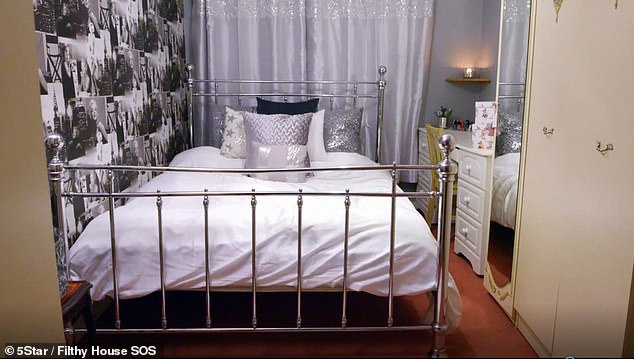 The team replace the bed and clean all surfaces, getting rid of the clutter and dirt in the bedroom (pictured)

At the start of the show, a teary-eyed Charmaine admits she doesn’t let people into her house anymore.

‘I’ve separated myself from family and friends, I keep making excuses up all the time but there’s a lock on the gate in case they did turn up, you know,’ she says.  ‘I need help cleaning my home because I can’t do it myself.

‘I haven’t got that energy and motivation,’ she admits. ‘If it wasn’t for the dogs, I wouldn’t even get out of bed some days.’

But grandmother Charmaine dreams of turning the tide around and being able to have her family over.

‘I’d love to have people in my house. I could just see in the kitchen saying ” would you like another cup of tea or a nice biscuit,” but I can’t do it in my house,’ she says. 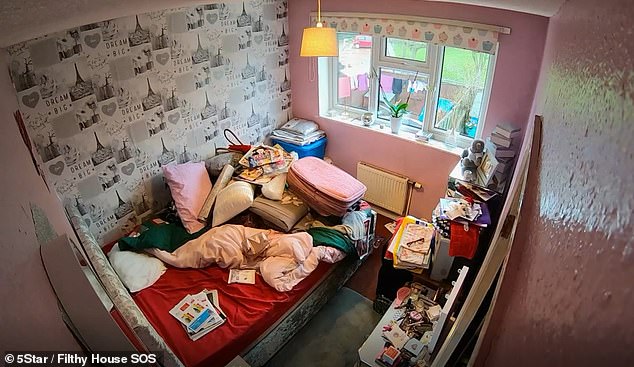 Charmaine has used her spare room as a dumping ground and admits she hasn’t cleaned it in a decade, pictured 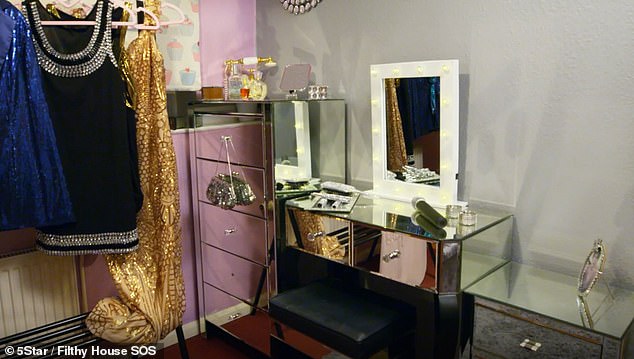 But after the three-day makeover, the room is re-utilised as a sparkling dressing room, pictured

‘It’s too embarrassing and I’m too ashamed to see my granddaughter see the house as it is,’ she adds. ‘I live in mess, I’m sorry,’ she cries.

When Brennan and Richard get to Charmaine’s house, they are faced with a gigantic task, as some of the rooms are not even accessible, due to all the clutter the grandmother’s amassed throughout the years.

The first room the duo inspect is the kitchen, and from they are confronted with a large amount of dog hair covering all surfaces. Brennan spots that hair has even reached the oven, and some of the bottle of expired sauces in her fridge.

The hair follows them into the master bedroom, where Charmaine sleeps, and in the guest bedroom, which is full of clutter, including bags of old magazines.

The room is so dusty that Brennan gets a coughing fit, explaining: ‘I’m really struggling with this. As you can see, we’re not dong very well with the fur.’ 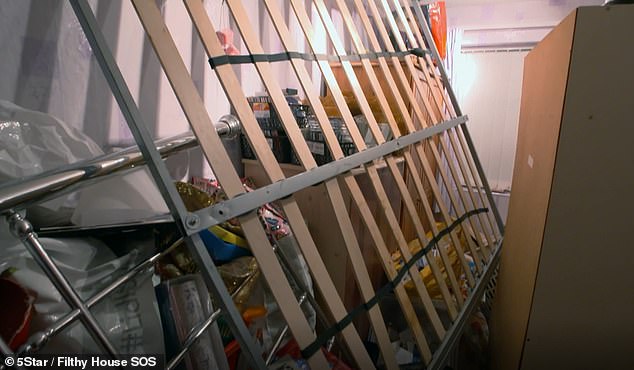 The guest bedroom is full of clutter Charmaine doesn’t need at the start of the show, pictured 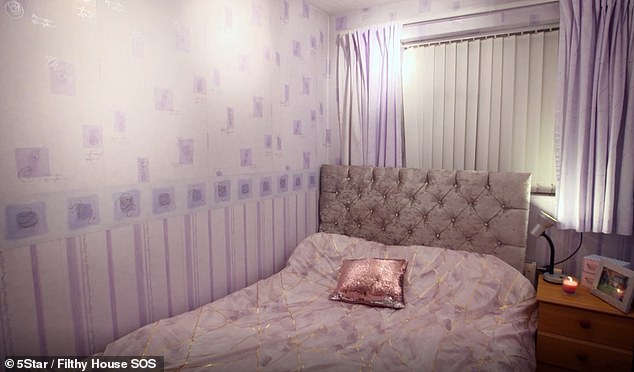 By the time the team is done, it is a welcoming, bright and clean room that can be used by her granddaughter, pictured

‘The air quality is really poor, Brennan was really struggling to breathe and we’re only in there for five minutes,’ Richard says.  ‘This is madness,’ one of the cleaners tells the other off camera.

But the team takes on the challenge, going room by room to clean and restore the flat, which has been left to its own devices for years.

As he is tasked with getting rid of the fur that covers the flat’s carpeted floor, Richard grows increasingly worried that he might have a flea infestation on his hand.

‘I’m feeling a little concern we might have something going on here,’ he says, going through some of the Chihuahua’s hair and noticing some black beads that could be dead fleas.

He also notices white sheds on the flat’s skirting, which could be flea larva.  After a chat with Brennan, he decides to fumigate the flat overnight in order to get rid of the fleas, and Charmaine has to spend the night at a hotel. 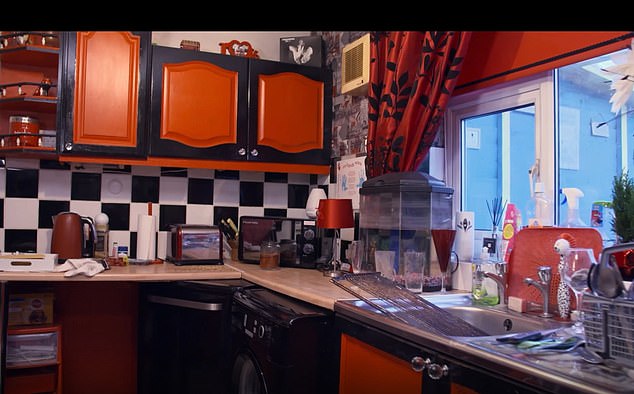 Charmaine’s kitchen is so dirty at the beginning of the cleaning, pictured, that thousands of harmful bacteria can be found on her sink 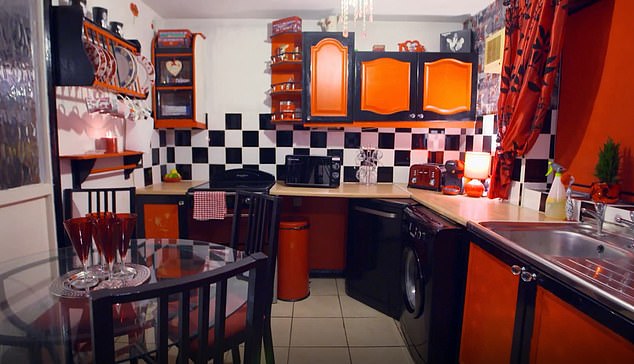 At the end, it is a functional and clean kitchen, pictured. Another challenge is to convince Charmaine to let go of some of her clutter, as she struggles to part with magazines that are a year old because she ‘hasn’t read them’

The pair also find dead woodlice, which Richard jokes ‘even have dust on them’ in another area of the flat.

Another challenge is to convince Charmaine to let go of some of her clutter, as she struggles to part with magazines that are a year old because she ‘hasn’t read them’.

Richard and Brennan come up with a ’10 seconds rule’ to force the grandmother to make snap decisions to help her part with the useless objects. Soon enough, she is emptying boxes of papers into the skip in front of her home.

But most of the work remains to be done as Brennan tackles Charmaine’s kitchen and realises she’s been storing products that are five years out of date in her fridge, including eggs that are five months old.

When he tells her, a bashful Charmaine says she had not realised, and Brennan tells her she needs to keep on top of what’s in her fridge if she wants to have people over.

He then moves on to the sink, but calls Richard to have a second look, saying: ‘We got some serious problem on this sink. It hasn’t been cleaned for a long time, you can see that.’ 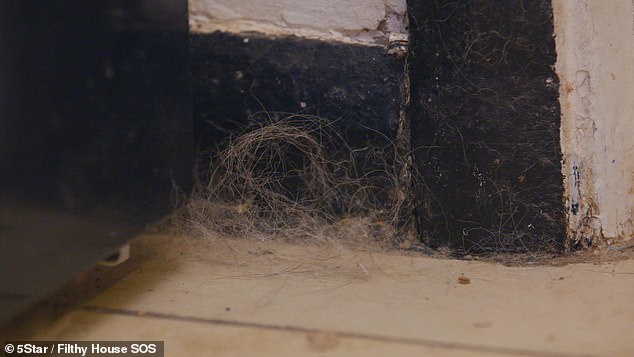 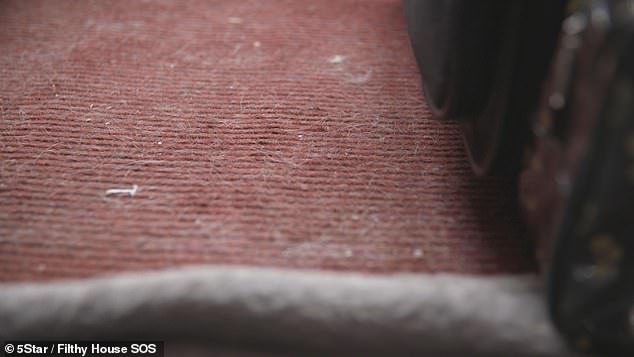 Charmaine’s carpeted floor, pictured, is covered with hair, and in some area, woodlice has had time to settle and die without her noticing

Richard takes out a swab test to show Charmaine how much bacteria can be found on a small area by the tap. He explains that according to the kit he uses, a sink that gets a minimum of 60 is exposed to house harmful bacteria.

The team and Charmaine are stunned to find that the small area on her sink reaches a 11,923.

‘That swab test showed 200 times to recommended limit of bacteria,’ Brennan says. ‘If that doesn’t wake up Charmaine, nothing will,’ he adds.

Charmaine and the team tackle the sink, and at the end of the day, the kitchen is clean enough to cook. It is the first home-cooked meal Charmaine has had in five years.

Thankfully, at the end of the show, after three days of work, the team have managed to thoroughly clean Charmaine’s flat, and have restore the guest-room, where her granddaughter will be able to stay.

‘I’m still in shock I still don’t believe that is my house. Thank you so much,’ she tells Brennan and Richard. ‘You’ve done amazingly well,’ Richard says.

‘You’re so nice, both of you, I’m so sorry,’ Charmaine says, tearing up.  ‘Now her home’s done, Charmaine can start socialising in her home, not just outside the gate,’ Brennan says.