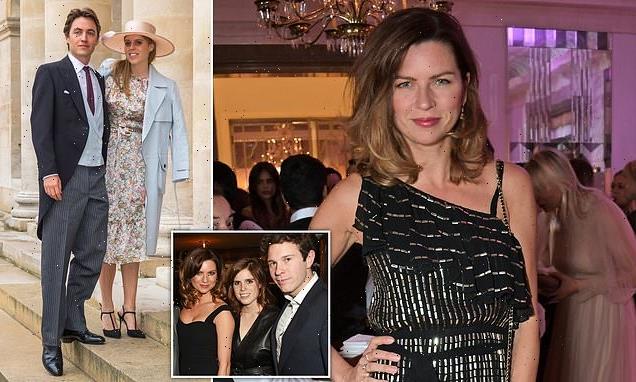 Mother-of-three Gabriela, 41, founder of GP Nutrition, counts the Queen’s granddaughter, 32, among her inner circle, having helped prepare Beatrice, her sister Princess Eugenie and their cousin Prince Harry for their weddings.

Speaking to Hello!, the Czech-born former model, who spent lockdown in a 17th-century manor house in Oxfordshire, revealed how the royal and her husband Edo Mapelli Mozzi’s ‘dynamic’ has changed since their big day on 17 July last year – with the couple becoming a ‘proper family’.

Beatrice, who is godmother to Gabriela’s daughter Iris, four, announced earlier this month that she is expecting her first baby with Edo in autumn 2021. 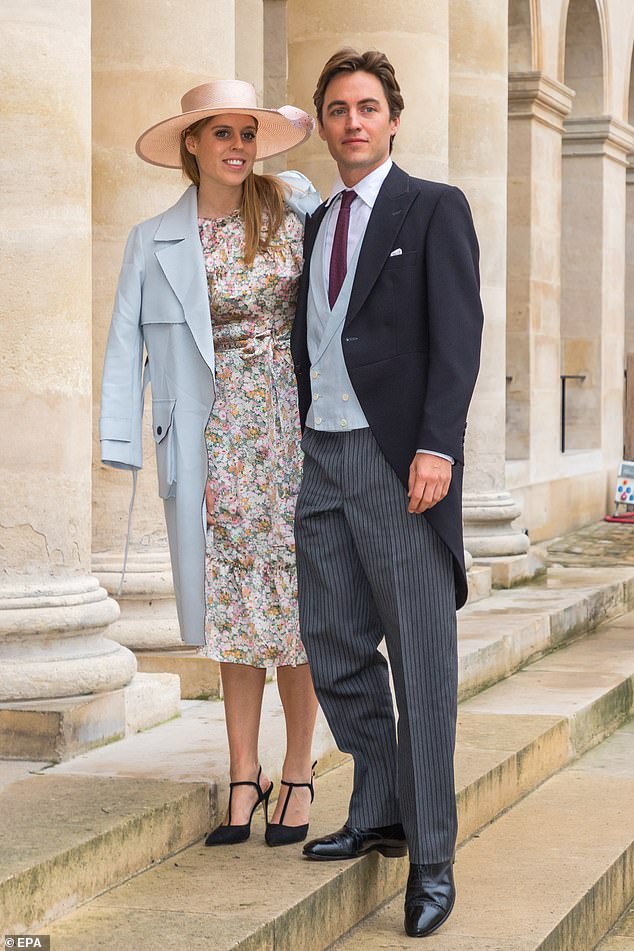 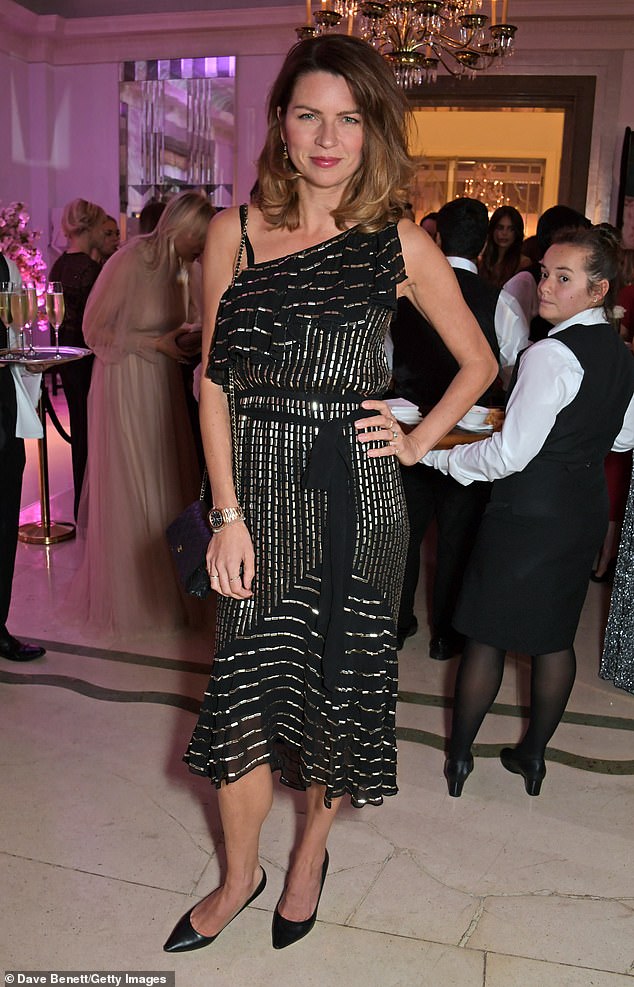 Mother-of-three Gabriela, 41, founder of GP Nutrition, counts the Queen’s granddaughter, 32, among her inner circle, having helped prepare Beatrice, her sister Princess Eugenie and their cousin Prince Harry for their weddings. Pictured, Gabriela is elegant in black and silver at a charity event in London in 2019

Commenting on the news, the nutritionist said: ‘I couldn’t be happier for them, it is so exciting. They are both amazing with children and it will be so lovely for Wolfie to have a baby brother or sister.

‘They are so happy together and now they are finally married. It’s funny how that changes the dynamic. Even though they were wonderful together before, they are a proper family now.’

Gabriela and her fund manager husband David, who are parents to Maia, ten, and four-year-old twins Iris and Caspar, were expected to attend Beatrice and Edo’s nuptials last year, but the event had to be scaled back due to Covid restrictions.

The couple were guests at St. George’s Chapel at Windsor Castle for both Princess Eugenie and Prince Harry’s weddings in 2018. 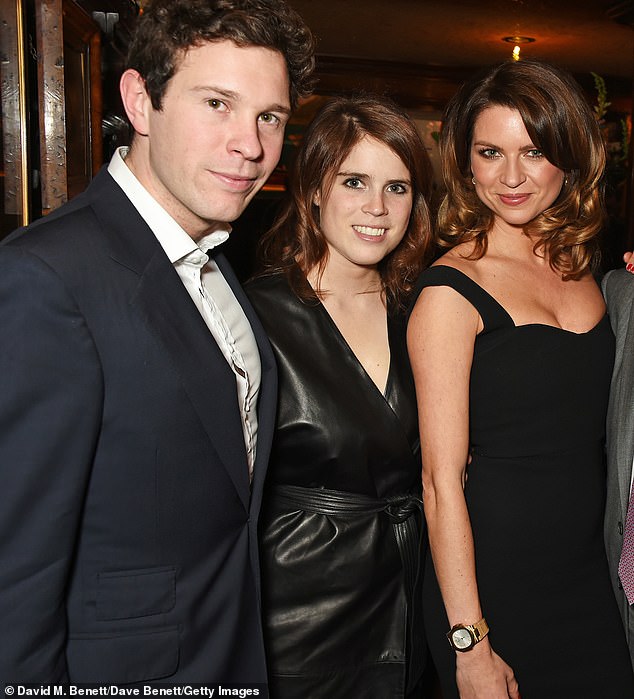 The nutritionist reportedly helped Eugenie ahead of her 2018 wedding. Pictured, Gabriela, Eugenie and Jack Brooksbank at an event in 2016

Beatrice and Edo enjoyed a slimmed-down wedding at the Royal Chapel of All Saints at Royal Lodge, Windsor on July 17.

The ceremony details were not made public beforehand and the pair were originally due to marry in the Chapel Royal followed by a reception in the gardens of Buckingham Palace – but their wedding was postponed because of the coronavirus outbreak.

Beatrice’s father the Duke of York walked her down the aisle but he did not feature in the photographs released by Buckingham Palace. The wedding was also attended by The Queen and the Duke of Edinburgh.

‘I think she did it in such an incredible way – it was exactly right at the time,’ said Gabriela. ‘Bea wanted to get married and she married the man the she loved.

‘They were thoughtful with regards to the rest of the nation that was locked down. It’s just wonderful. I’m so happy for her.’ 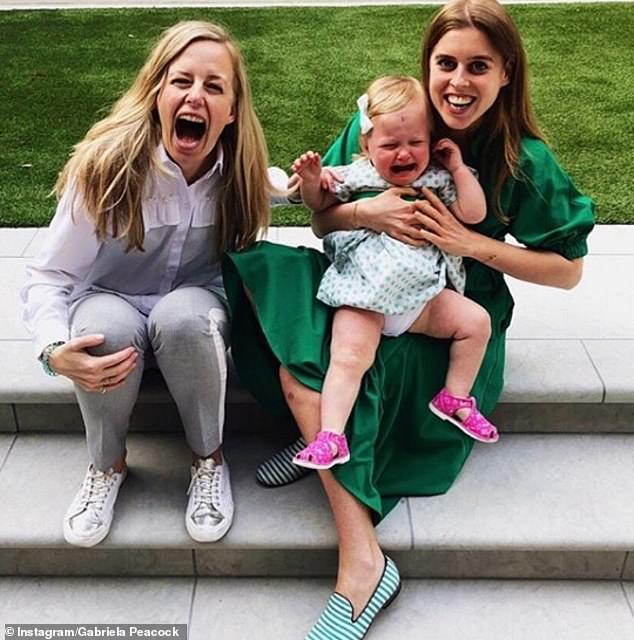 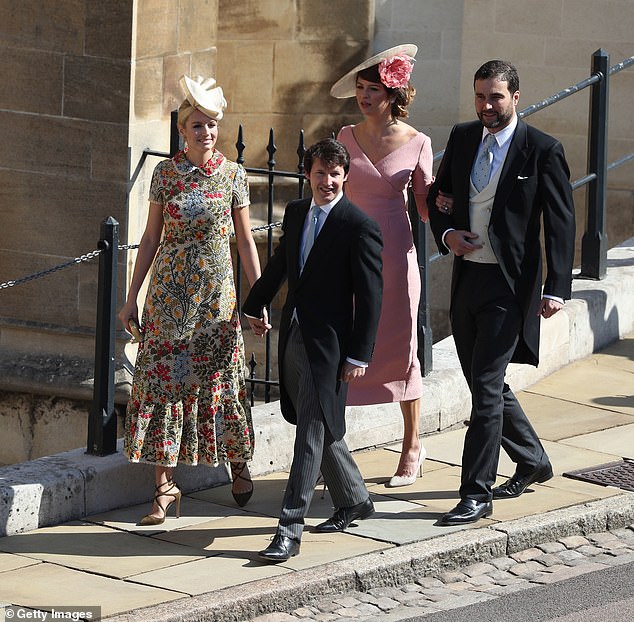 Gabriela and her husband David were guests at Princess Eugenie and the Duke and Duchess of Sussexes’ 2018 weddings. Pictured, Gabriela and David arrive with James Blunt and his wife Sophia at Harry and Meghan’s wedding

Gabriela was speaking to the publication about her new book 2 Weeks to Feeling Great, as well as her Oxfordshire retreat after spending lockdown away from her Notting Hill home in London.

The nutritionist has an excellent track record in working with royals, and reportedly helped Prince Harry and Princess Eugenie ahead of their 2018 weddings.

Meanwhile, Beatrice’s baby will be the second grandchild for Prince Andrew and Sarah Ferguson and the Queen’s 12th great-grandchild following the arrival of Prince Harry and Meghan’s Markle’s second child in the summer.

The princess’ baby boy or girl will be born 11th in line to the throne, but although their mother is a princess, he or she will not have a royal title.

Only grandchildren of the monarch through the male line are automatically entitled to the styling of HRH. This means he or she will be plain Master or Miss Mapelli Mozzi.

The Queen could bestow a title on her great-grandchild if desired, but it is unlikely to be asked for.