Fruit and vegetable prices are expected to rise by up to 25 per cent across Australia this summer as COVID-19 travel restrictions limit labour available for harvesting.

A new report has forecast Australia's farm gate production to reach more than $65 billion this year, as the agricultural sector bounces back following the nation’s second largest winter crop and promising rainfall outlook despite the horror of bushfires, drought and the coronavirus pandemic.

While production – buoyed by the best ever winter crop in NSW – is predicted to rise by 7 per cent on last year, exports are tipped to fall by 7 per cent to $44.7 billion because of ongoing trade tensions with China. 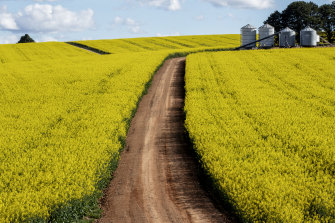 The Australian Bureau of Agricultural and Resource Economics and Sciences report, released on Monday, points to the continued recovery for the farming sector from drought — and resilience in the face of COVID-19.

ABARES executive director Dr Steve Hatfield-Dodds said the nation was expecting a near all-time high winter crop and a more favourable outlook for summer cropping than in recent years.

“Australian producers manage one of the most variable environments in the world so ebbs and flows in production are to be expected," he said.

The report found recovery from lengthy and crippling drought had limited production and exports of livestock products and fibres, with meat prices also falling as the African Swine Fever impact on China’s pork production began to lessen.

Livestock prices have stayed high with herd and flock rebuilding, and continued international demand. Exports have also continued to find markets during the pandemic but Dr Hatfield-Dodds said the residual effect of past dry seasons and trade uncertainties are pushing down export value.

The report forecasts the prices of summer vegetables, stone fruit, pome fruit and table grapes could jump by between 15 to 25 per cent and competition for labour is expected to increase due to a smaller-than usual foreign workforce on extended holiday visas.

Workers are expected to be competitively allocated to industries able to pay the most and those harvesting earlier in the season are also expected to be advantaged.

Disruptions to Australia's trade with China continue and exports of barley and wine to date are the most affected.

Barley has been diverted to other markets, and exports of high-value wines to China spiked in anticipation of the anti-dumping security deposits introduced last month.

It is expected Australia may be able to divert a limited amount of wine to existing markets such as the United Kingdom and the United States, but a lack of access to the Chinese market will likely reduce production value and sales in 2020–21.

Australia's beef exports have been largely unaffected by trade tensions with China despite five processing plants suspended from exporting in May and June for administrative reasons.

The fall in exports as China recovers from African swine fever has been accelerated by low production and high prices for Australian beef.

This deficit in beef exports to China will be replaced by competitors regaining a market share presenting a future challenge to Australian exporters, the report said.