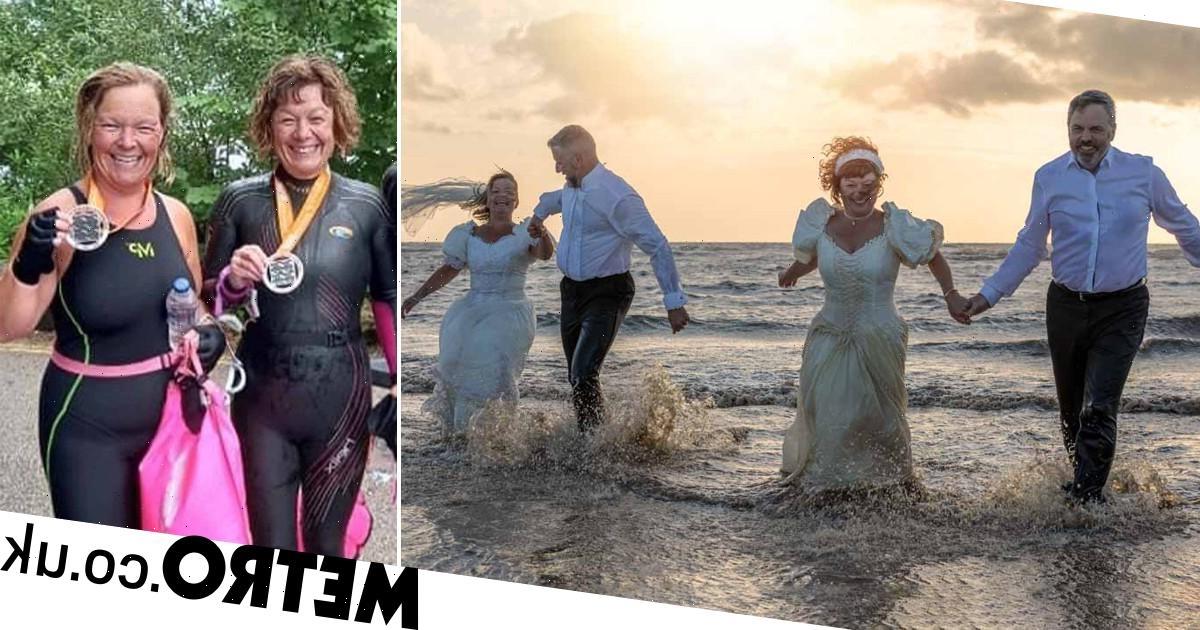 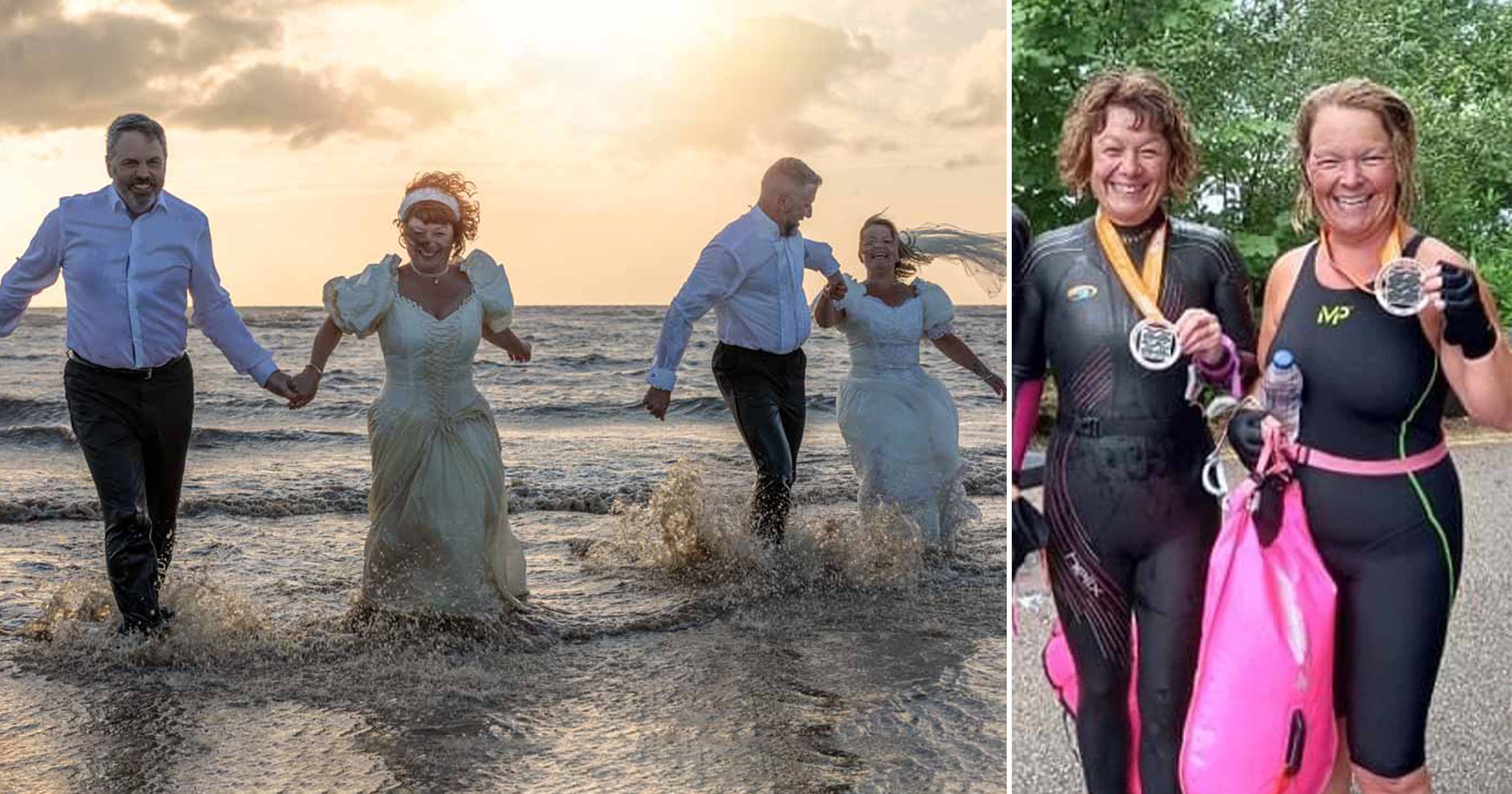 Two close mates who discovered they had been unwittingly living parallel lives after they met wild swimming, have celebrated their joint wedding anniversaries in a typically extravagant way.

Both aged 47, they discovered that not only were they both born on April 4, 1974, but they were delivered just five hours apart at Glenroyd Maternity Hospital in Blackpool, Lancashire.

They also each have two children with their husbands – Andrew Edge, 47, who runs a dog day care service and Brian Warburg, 48, an audiologist – and both had 25th wedding anniversaries in August, just a week apart.

‘We were chatting about our age and found out that not only were we born on the same day five hours apart, but we also were born at the same hospital,’ says Justine.

‘We just had so much in common. We were both mums of two, we both live on the Fylde coast and are even both the same height – just 4ft 11ins.

‘Then, when I mentioned that my 25th anniversary was coming up in August, I couldn’t help but laugh when Sarah said it was hers too.

‘We married in the same month just a week apart. It was amazing that we had so much in common. There were so many spooky coincidences.’

And when Justine decided to celebrate her 25th anniversary by running into the ocean in her wedding dress, Sarah couldn’t wait to join her.

‘It was amazing,’ says Justine. ‘Braving the elements in the original dresses we wore 25 years ago was fantastic. We both love wild swimming, so it made perfect sense.’

A fan of wild swimming for six years, Justine joined the Crazies in January 2021.

‘I was doing a sea dip, where you run into the sea to raise money for charity, on New Year’s Day,’ she says.

‘Then I saw this group of women all swimming in the sea and asked them what they were up to. They belonged to the Cleveleys Crazies and, as you could swim during lockdown, they went in the icy sea every day.

‘I bought a wetsuit a few days later and started meeting up to swim, too. It was amazing for my mental health. When my head hit the icy cold water I just felt completely refreshed.’

She soon befriended Sarah, who had joined the group in November 2020 and, as they got to know each other, their parallel lives were revealed.

While Justine had been just 15 when she met Andrew at secondary school and they became a couple, they tied the knot on August 31, 1996, and went on to have two daughters, Caitlyn, 21, a floor manager, and Bethany, 17, a full-time student.

Meanwhile, Sarah met Brian on a three-legged pub crawl in 1993, when she was a friend’s plus-one at his work party.

When the women decided to frolic in the waves in their wedding dresses to mark their silver anniversaries, their husbands were happy to follow suit.

‘I forgot about my wedding dress until I found it stuffed under the bed,’ says Justine.

‘I’d seen a few pictures of couples wild swimming on their anniversaries and decided that I really wanted to swim with Andrew in my wedding dress on our 25th.

‘I excitedly told Sarah about my celebration plans and she loved the idea, especially as she also still had her wedding dress.

‘It seemed bonkers not to do it together, so we made the plan to swim on August 12, as the weather was meant to be better.’

So, both women slipped into their 1990s bridal gowns, while their husbands wore dinner suits they already owned, and the foursome took to the beach – running into the chilly sea to celebrate a quarter century of marriage.

While Brian also embraced the idea, he took slightly more convincing, according to Sarah.

‘Brian’s not a strong swimmer,’ she explains.

‘But, despite being a bit nervous about the water, he was completely on board with the anniversary dip. He’s so supportive and it was a lot of fun – although he made me promise to not go in above the knee.’

Prior to the pandemic, Sarah had already thought up some quirky plans for her milestone anniversary.

‘We were meant to renew our vows in Las Vegas but, due to Covid, our plan couldn’t go ahead,’ she says.

‘I was so excited to go swimming in my wedding dress. I get it out every now and then to do silly things like the hoovering.

‘I used to wear it all the time when my sons were little. They would say, “Mummy’s a princess.”

‘Luckily, since our dip, my dress has come out of the wash sparkling, too.’