A seasonal chill in several northern U.S. states and the Canadian provinces of Alberta and Manitoba could mean fewer French fry orders for hungry customers.

Cold and wet weather conditions that started in October throughout key regions of the U.S. and Canada have damaged potato crops and caused processors to scramble for supplies to keep the nightshade vegetable on menus, according to a report from Bloomberg.

BACON SHORTAGE COULD HIT US AMID PORK CRISIS IN CHINA

Idaho, North Dakota and Minnesota are the American potato hotspots that were affected by frosty temperatures, and Alberta, Canada's top spud producer, is withstanding similar weather.

“French fry demand has just been outstanding lately, and so supplies can’t meet the demand,” Travis Blacker, an industry-relations director with the Idaho Potato Commission told Bloomberg in a phone interview.

EMERGENCY HITS US FARM COUNTRY DUE TO PROPANE SHORTAGE

Fewer potatoes with no change in consumption could lead to a shortage and price increase for the year, according to Stephen Nicholson, a Rabobank senior grains and oilseeds analyst shared with the business publication. Moreover, international costs may see a climb if the U.S. is unable to export as much. 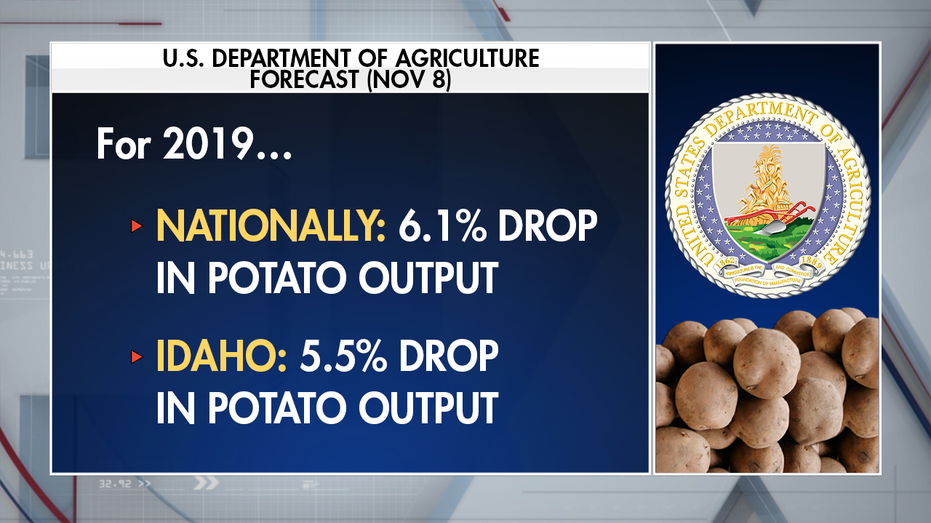 A Nov. 8 domestic forecast from the U.S. Department of Agriculture states that output will drop 6.1 percent for 2019, a low not seen since 2010. America’s potato state, Idaho, was forecasted to take a 5.5 percent dip as well.

CALIFORNIA FARMS ARE SUFFERING FROM A LABOR SHORTAGE. HERE'S WHY

The potato crops that have been salvageable are smaller in size, according to the Bloomberg report. French fry manufacturers typically prefer longer varieties to chop the veggies up into their iconic shoe-string shape.

America’s northern neighbor was also hit hard by the unexpected change in the weather.

The United Potato Growers of Canada estimated about 12,000 Manitoba acres were left unharvested, which is equivalent to approximately 18 percent of the province’s total planted area. The loss is significant since Manitoba is the country’s second-largest grower, according to the report.

Alberta, Canada’s other top producer, is said to have lost about 6.5 percent of its potato crops to frost damage.

An official government-issued estimate will be issued on Dec. 6.

However, not all was lost and producers on the East Coast remain optimistic. Mary Keith, a spokeswoman from Cavendish Farms said in an email sent to Bloomberg that the company doesn’t expect to have a customer shortage thanks to its more bountiful harvest in the east.

Likewise, Kevin MacIsaac, a general manager of the United Potato Growers of Canada told the publication: “It’s a manageable situation. Potatoes are going to have to move from one channel to another that they sometimes don’t move in a normal year.”