Republican Senator Rick Scott of Florida announced Friday morning that he has tested positive for COVID-19, joining a slew of U.S. officials who have recently contracted the virus.

“After several negative tests, I learned I was positive this morning,” Scott said in a statement. “I am feeling good and experiencing very mild symptoms. I will be working from home in Naples until it is safe for me to return to Washington, D.C.”

Scott, who is the new chairman of the GOP Senate campaign arm, campaigned last week with Republican Senators David Perdue and Kelly Loeffler ahead of January runoff races in Georgia. At the indoor event, Scott wore a mask but removed it to speak in front of the crowd. Photos showed many people who attended the event were not wearing masks. 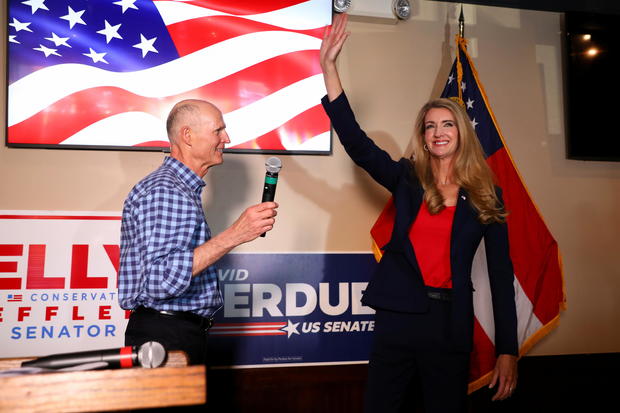 On Saturday, Scott, 67, announced on Twitter that he came into contact with someone who tested positive for the virus. While he tested negative at the time, the senator said that he would begin quarantining in his Naples home.

“I want to remind everyone to be careful and do the right things to protect yourselves and others,” Scott said. “Wear a mask. Social distance. Quarantine if you come in contact with someone positive like I did.”

Wear a mask. Socially distance. Quarantine if you come in contact with someone positive like I did. We will beat this together, but we all must be responsible. I want to thank all the incredible health care workers who are working around the clock to care for patients.

Scott reminded Americans to be especially careful during the upcoming holiday season, urging people to listen to guidance from health officials.

“As we approach Thanksgiving, we know this holiday will be different this year. But, listen to public health officials and follow their guidance,” he said. “We will beat this together, but we all have to be responsible. I want to thank all the incredible health care workers who are working around the clock to care for patients and I pray that by next Thanksgiving, COVID-19 will be a thing of the past.”

Scott is the second senator to contract the coronavirus this week. Senator Chuck Grassley of Iowa, the second-oldest senator and third in line of presidential succession, announced earlier this week that he tested positive for COVID-19.

According to Johns Hopkins University, The U.S. reported over 187,000 new cases Thursday, a new record high. The nation also surpassed 250,000 deaths this week — the highest, by far, of any nation.