Everyone has an opinion about Florida. And to say these opinions are often not very favorable would be an understatement. Ask about the Sunshine State, and you’ll hear about tacky beaches and alligators run amok. There’s the Twitter account named for the infamous “Florida Man,” which regularly tweets out headlines about the absurd activities Floridians allegedly engage in, like “Deputies search for suspects who dumped alligator inside Florida Wawa,” and “Florida man who stole ice cream truck charged with burglary, car theft, weed possession.” This Twitter feed is seen as so accurate and newsworthy, it counts among its 389K followers the Washington Post and Rachel Maddow. In 2017, Thrillist ranked Florida “the worst” state in the nation. It was hardly a scientific ranking, but it got a fair amount of attention, given the national appetite for Florida bashing. Homer Simpson called it “America’s wang,” for heaven’s sake.

As a Sunshine State native who spent my first 21 years there, I’m acutely aware of Florida’s reputation. I’ve lived outside the state for years now, and I will be the first to tell you that Florida can, at times, be strange. For instance, my mother recently sent me a link to this news story about my childhood housekeeper’s arrest. She was charged with a murder she allegedly committed while she was leading a cult. Looking at the photo in the article, I immediately recognized her as the lady who cleaned our house once a week for almost three years while I was in elementary school. Fortunately, she never did anything unusual to my family, and nothing bad ever happened when she was at my house. But still, wild, right? This is the kind of thing that just doesn’t seem to happen in Iowa. 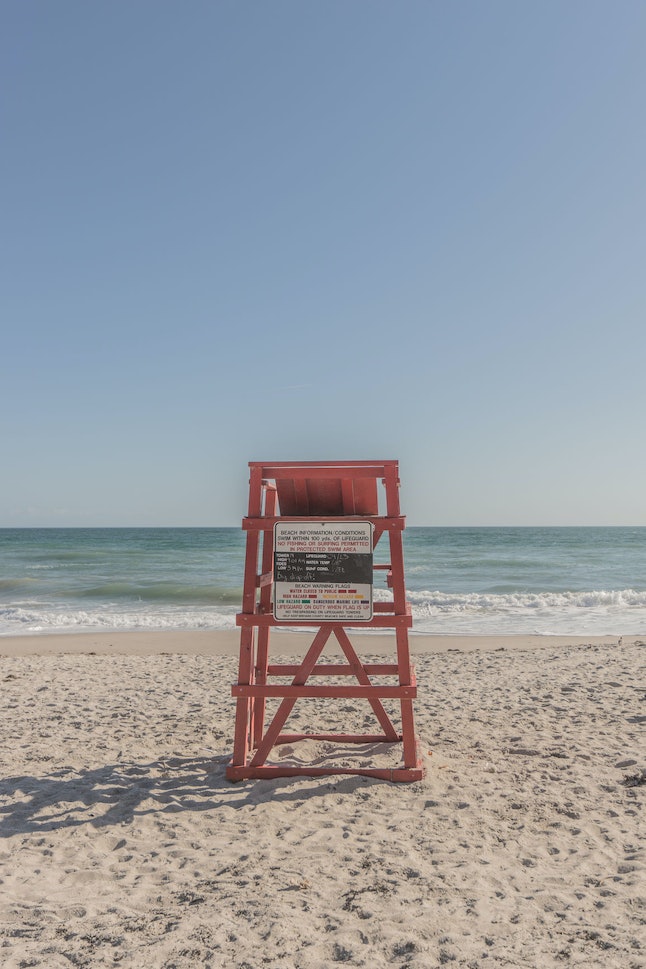 While a common take on Florida is that it’s a "cultural wasteland"— and that the best thing about it just may be those “Florida Man” antics — others don’t so much ridicule the state as view it as a place so bizarre, it constitutes its own sub-genre. In recent years, Florida and its “Florida-ness” have been the subject or backdrop of numerous acclaimed books and movies, often created by Floridians: Bestselling author Lauren Groff’s recently released short story collection, Florida, depicts the subtropical landscape and lives within it as more ominous than trashy. Karen Russell’s 2005 bestseller Swamplandia! brought to life a fictional family of alligator wrestlers in the Everglades, a setting The New York Times Book Review called “lusciously strange.” Oscar-nominated film The Florida Project highlighted the struggles of a mother and daughter living in a roadside motel near Disney World. When Jeff VanderMeer wrote Annihilation, the source material for the 2018 Natalie Portman film of the same name, he based the unsettling atmosphere of the novel’s foreboding "Area X" on a rural part of North Florida. And cable channel TNT just green-lit a third season of Claws, an off-color dramedy about manicurists-cum-mobsters in South Florida’s Manatee County.

“For creative stuff, Florida is really kind of an interesting place in the country’s imagination,” Tyler Gillespie, a Largo-based journalist, writer, and author of poetry collection Florida Man, tells Bustle. Gillespie sees Florida as a place that’s “been bubbling” for a while in the national conversation. "Environmentally, socially. It’s a really rich place for creative stories to happen.”

While this second take on Florida is more positive than the first, it still doesn’t explain the current national obsession with the state. Why Florida, and why now? According to New York Times bestselling and Pulitzer Prize-winning humorist Dave Barry, author of over 30 books including Best. State. Ever: A Florida Man Defends His Homeland, it turns out we’ve always been a little obsessed with the southernmost state. “Florida has been trending for a couple of decades now,” Barry tells Bustle, pointing to the 2000 Bush vs. Gore presidential election re-count debacle as when Florida really became the butt of national jokes and obsession.

Gillespie, who is working on a new essay collection inspired by the state, thinks that Florida might be inspiring masses of artists “because a lot of Floridians have been looked at sideways by the rest of the country for so long that it’s caused writers to try to contextualize the state or at least their experience of it.” He adds, “There are a lot of stories here — funny, tragic, all of it. Hearing that every day gives people ideas; I know it does me.”

In fact, a little historical digging reveals that Florida has long received attention for being, well, a weird place. Historian Jack Davis, a professor at the University of Florida, won a Pulitzer Prize this year for The Gulf: The Making of an American Sea, his book about the Gulf of Mexico, the body of water that borders Florida’s western coastline. Davis tells Bustle that Florida’s reputation can be traced back to the land boom in the early twentieth century. “Beginning in the Everglades, all these land companies were selling land that’s under water to Northerners and Midwesterners. They were saying, you can retire. National newspapers were barbecuing Florida for this,” Davis explains. Davis also pointed out that Florida’s exotic ecology was the draw for tourists before Disney World entered the picture in the early 1970s. “There has always been this image of the exotic, and it may have transferred from the landscape to the people of Florida,” he says. 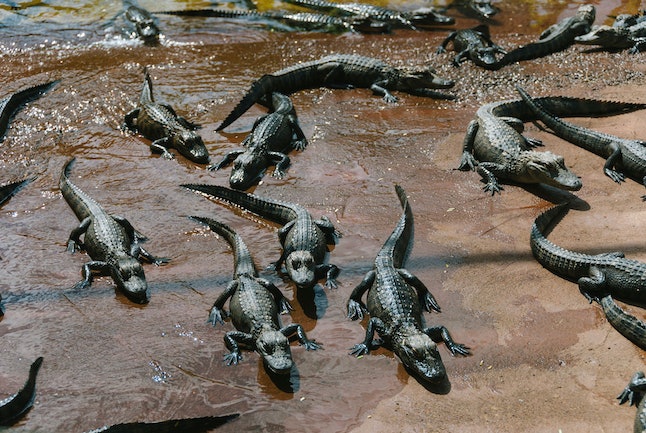 But before it got its somewhat bizarre reputation, Florida was a key part of early U.S. history. America’s oldest city settled by Europeans is the seaside town of St. Augustine, Florida. As PBS recently highlighted in the special Secrets of Spanish Florida, Europeans showed up in Florida approximately a full two generations before Jamestown, although this fact is not mentioned in standard American history textbooks. As a Spanish territory, La Florida once encompassed not only present-day Florida but also much of the southeast. The area was host to two different British colonies during the Revolutionary War.

And Florida’s notable history isn’t only in the distant past: Computer giant IBM developed and manufactured its first PC at its Boca Raton facilities. Neil Armstrong and Buzz Aldrin’s Apollo 11 mission to the moon launched from Cape Canaveral (then called Cape Kennedy) — thus, mankind’s “giant leap” began in the state sometimes referred to as “Flori-duh.” Maybe one of the strangest aspects of Florida is how all of this fundamental history has been mostly ignored by the rest of the country.

Florida may have botched a presidential election in 2000 and tried to sell people submerged (and likely alligator-infested) land a hundred years before that. And yes, Florida is a humid place with some unusual animals and plants. But what if Florida is also the most representative microcosm of America that we have?

Florida is the third most populous state in the country, with more than 20 million residents. To give some perspective, Florida has over 10,000 dentists — a figure that easily has to exceed the number of alligator wrestlers in the state. Politically, it’s an important swing state that alternates red and blue. It has a large and diverse economy worth over $1 trillion; if Florida were a country, it would have the 17th largest economy in the world, beating out entire sovereign nations like Switzerland and Saudi Arabia. According to Forbes, it’s home to seven of the 25 fastest-growing American cities. Florida’s farming industry is a major contributor to America’s agricultural economy. The large booming economy feels more mainstream than backwater.

Then there is Florida’s diversity, which mirrors or leads national trends. Almost 17 percent of Florida’s population is African-American, compared to 13 percent of the national average. And more than a quarter of all Floridians are Latinx (compare this to the overall U.S. Latinx population of 18 percent). Historian Gary Mormino, professor emeritus at the University of South Florida, tells Bustle, “Miami is not simply one of America’s great cities, it is one of America’s great immigrant cities.” Citing Fidel Castro’s seizure of Cuba in 1959 and the resulting wave of Cuban refugees, Mormino says, “Historians compare what happened in Miami to the Famine Irish fleeing to Boston and European Jews flocking to New York City." And today, Cubans are hardly the only Latinx community present in Florida; the state is also home to people who identify as Puerto Rican, Mexican, or Dominican.

Florida does have a lot of older people, but it’s only the fifth “oldest” state in terms of median age. (It’s also unfortunately not farfetched to believe that some of the bullying Florida endures is related to the fact that ethnic minorities, Jewish people, the poor, and the elderly figure prominently into the state’s population.)

While Florida’s strengths are America’s strengths, Florida’s problems are also America’s problems. As reported by the Tampa Bay Times in 2016, the top one percent of earners in Florida made $1.27 million on average, almost 35 times the average income of $36,530 for the remaining 99 percent. Florida is also home to 40 of America’s 400 wealthiest people. In addition to growing income disparity, other daunting issues faced across the country, like gun violence, voting rights, and the effects of climate change, are playing out in Florida on a grand scale. The February 2018 Parkland school shooting resulted in the death of 17 students. Coastal communities like Miami are facing dire threats from rising sea levels. This past November, Floridians voted to restore voting rights to over 1.4 million individuals with felony convictions in their pasts, after decades of being one of only four states where people with felonies were barred from voting. A lack of Spanish-language ballots prevents numerous citizens from voting in local elections at all, and recent chaotic midterm elections exposed statewide problems with vote counting, among many other issues.

But Floridians aren’t just suffering through these problems. Often, they’re pioneering new methods of coping or fighting back — methods that the rest of us should take notice of. The Parkland shooting inspired the Never Again movement and March for Our Lives led by survivors. Voting rights groups are active in the state, pushing for better practices. Many Florida communities have for years maintained “living shorelines,” an increasingly popular approach to erosion that uses organic materials, such as living grasses and oyster shells, as a more ecological alternative to traditional hard-structured shoreline defenses like sea walls. Scientists in the state are experimenting with ways to fight a particularly persistent, likely climate change-related algae outbreak called “red tide” that’s been killing scores of the state’s marine animals. And lawmakers are already trying to develop ways to make sure the 2020 elections don’t suffer from the same problems the 2018 ones did.

Mormino tells Bustle, “Will Florida become a model showing America how to manage growth, restore ecosystems, preserve water, and balance generations of Floridians into a common cause? Will the challenge of global warming simply overwhelm the state and its thousand miles of coastline? What is the tipping point?”

For all of Florida’s significance, we largely fail to see it. We prefer to focus on sensational and sugary diversions as an easier, more palatable alternative to delving into complex problems that mirror worldwide issues, like drug policy, economic inequality, and environmental devastation. But as Mormino wrote in his book Land of Sunshine, State of Dreams: “The Florida of today is the America of tomorrow.” So, in short: ignore the reality of Florida in favor of videos of high dudes stealing ice cream trucks at your own peril.