“Transformers” movies are best known for their crashing, bashing ’bots and embarrassingly bad reviews. Until now.

The latest installment in the franchise, the origin story “Bumblebee,” is being welcomed with the sort of critical enthusiasm generally reserved for “Star Wars.” The prequel, directed by Travis Knight and starring Hailee Steinfeld and John Cena, has 100 percent positive (!) scores on Rotten Tomatoes from stunned critics.

Descriptions like “lovely,” “appealing,” “agile” and “fresh” are being bandied about.

“Imagine, if you can, a ‘Transformers’ movie in which the plot is coherent, the robots feel like characters (as opposed to gleaming CG creations), and the action is staged and edited clearly enough to follow,” Variety critic Peter Debruge wrote. 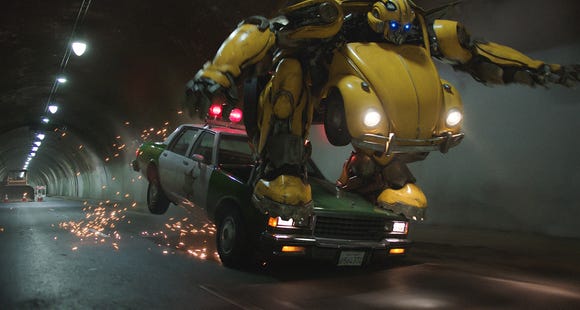 Bumblebee takes out a police car while in mid-transformation in the 1980s-set "Transformers" spinoff "Bumblebee." (Photo: PARAMOUNT PICTURES)

“BUMBLEBEE is good. Which means it is automatically the best TRANSFORMERS movie ever made,” tweeted Justin Chang of the LA Times with his review.

“After years of cinematic scrap heaps, ‘Bumblebee’ redeems and reinvigorates the ‘Transformers’ live-action film franchise with some heartfelt fun,” writes IGN’s Jim Vejvoda, who calls it “the best live-action ‘Transformers’ movie since the (original) 2007 film.

“It might not be a great movie or a radical reimagination of the familiar concept, but this ’80s-set prequel does strip away all the clutter and bloat that had piled onto the series over the last decade.”

Charlie (Hailee Steinfeld) goes on a coming-of-age journey when she gets a transforming robot car for her 18th birthday in the "Transformers" prequel "Bumblebee." (Photo: JAIMIE TRUEBLOOD)

Many praised the movie’s girl power.

“Fans of the classic ‘Transformers’ will be thrilled by many of the touches here,” says IndieWire’s Liz Shannon Miller. “But there is also now an entire generation of kids who are going to get to watch a girl drive, with a smile on her face.”

“No surprise here but Hailee Steinfeld is fantastic. The whole thing is an utter delight,” tweeted Collider’s Perri Nemiroff.

Whether the spinoff will be successful enough to “reverse (the franchise’s) recent downwards-bound box office – let alone launch the Hasbro cinematic universe being touted a couple of years back – remains to be seen,” says Phil Hoad of The Guardian. “But this retooling is snappy and wholesome enough to suggest we might still be watching in our self-driving cars.”

“Bumblebee,” set in 1987 and revolving around yellow Volkswagen Beetle/robot (voiced by Dylan O’Brien of “Maze Runner”), hits theaters Dec. 21. But word of mouth is building quickly after the movie’s U.K. premiere last week and a strategic sneak-peek screening in select theaters. The U.S. premiere is Sunday in Hollywood.