Ember suppression equipment has been funded to bolster the fire defences of the historic estate of artist Arthur Boyd on the NSW South Coast.

Bundanon, the 1100-hectare property that Boyd gave to the nation in 1993, came under fire attack from the devastating Currowan blaze in early January.

Fire came within one kilometre of the 1800s sandstone homestead and all Bundanon's outbuildings were saved from ember attack thanks to the efforts of fire crews and staff. 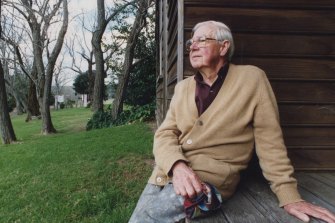 Arthur Boyd, who died in 1999, on his property Bundanon on the Shoalhaven River in NSW.Credit:AFR

Fire protection of Bundanon’s most significant heritage-listed buildings will be announced by Federal Arts Minister, Paul Fletcher, at a ceremony on Thursday to mark the start of works for a new $33 million purpose-built, underground fireproof store and contemporary gallery at Riversdale.

Bundanon Trust chief executive Deborah Ely said the trust had been trying to find the resources to install ember suppression systems for some time.

"We have just been told about the funding and are really ecstatic," she said. "If it had been in place it would certainly have given us more if not total confidence in facing this year’s threat."

The Boyd Homestead and Arthur Boyd Studio are on the national heritage register, Ms Ely said, and were irreplaceable. Artworks that were displayed in situ would return to Bundanon at the end of this fire season, while most items would remain in safe storage off-site.

Mr Fletcher said ember suppression equipment worth $300,000 would be installed as soon as possible to protect the property from bushfire threat. It is expected to include automatic ground and roof sprinklers and hose reels, backed up by a dedicated water tank and pumping system.

"The new system will make sure the Bundanon property, including the Arthur Boyd Homestead, studio, artists in residence and musician cottages, and the art collection store, is sufficiently equipped for future bushfire threats," Mr Fletcher said.

Meanwhile, the new building works at Bundanon are to be completed by late 2021, allowing the Bundanon Trust to expand artistic programming, at a time when the Shoalhaven region is working to recover from a catastrophic fire season.